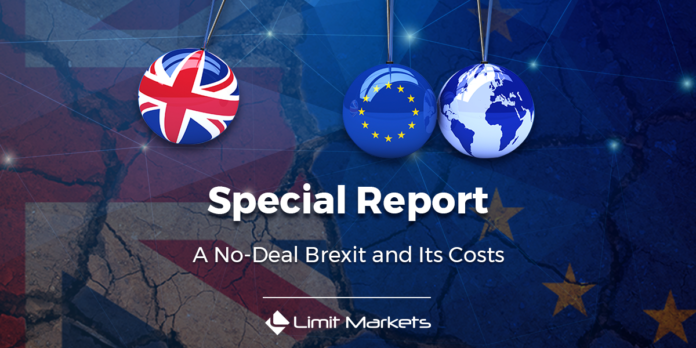 Prospects of the United Kingdom leaving the European Union without sealing a withdrawal and post-departure trade deal have dangerously risen since the coming to power of one of the key architects of Brexit, Boris Johnson at Number 10.

The pound in the meantime came crashing down to a 28-month low at 1.2117 against the US Dollar, losing nearly 2.5 percent of its value last week and only four cents higher than a deeper low of two last two decades. Investors are running away from the falling currency each time Johnson and his new cabinet members, many of whom happen to be hardliner anti-EU figures, threaten Brussels with a UK crash-out of the EU on October 31.

Traders around the world price the pound in the direction the new British administration shows — a disaster in the making for the currency and the country’s economy in the medium-term after the divorce. The no-deal situation could lead to economic disruption largely due to severe breaks in the supply chain and an increase in producer and consumer prices.

The more the likelihood of a no-deal Brexit rises, the clearer it becomes that the Queen’s currency is about to take a steeper downward slope on foreign exchange charts, just as it happened in the immediate hours after the contentious, fateful June 23, 2016 referendum that started all this. Such concern may harden sterling selling and pull down its value to 1.15 and even 1.00 as some others fear.

Investment bank BNP Paribas put the probability of a no-deal Brexit at 40% in May, 2019. That was before it was obvious that BoJo would enter the Number 10. The bets have now increased even higher, with Johnson saying he does not wish a no-deal situation but at the same time trying to get concessions from the EU, particularly on the Irish backstop clause of the deal his predecessor Theresa May brought.

The price tag for the UK has so far been £800 million a week since the referendum according to Gertjan Vlieghe, one of Bank of England’s monetary policy committee members. That is a tag that could see a spike after October, if Brussels continues its refusal of re-negotiating the Irish backstop or Boris refuses to step back and accepts the deal the Parliament rejected three times during May’s term.

Vlieghe has said that “an easing or an extended pause in monetary policy is more likely to be the appropriate policy response than a tightening,” in the event Britain is left alone in its biggest crisis moment yet since the Second World War.

Adding to that was the latest warning from the government’s Office for Budget Responsibility. The OBR calculated in late July that a no-deal Brexit could cost the country 30 billion pounds a year, while pushing it into a recession. The UK GDP could also fall by 2% by the end of 2020, along with the collapse of the currency.