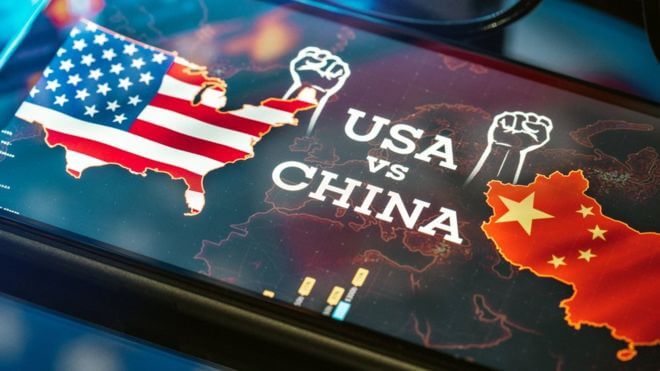 As the COVID-19 outbreak crushed global growth, the friction between the two largest economies of the world took a back seat in the first half of 2020, but it has recently got reignited over trade, technology, and geopolitical troubles that flames fears of a deeper economic collapse.

Speaking on Microsoft’s negotiations to buy the short video app TikTok, Trump said on Monday that the US government should receive a “substantial portion” of any deal price. Trump previously talked to the Microsoft CEO, giving the company 45 days to purchase TikTok and stated that TikTok would be banned afterward on the grounds that it provided intelligence to the Chinese Communist Party (CCP).

China Daily newspaper, one of the CCP’s English-language outlets wrote that it was unacceptable for one of the country’s technology firms to fall victim to “theft”.

In the first half of 2020, China bought only 5% of the $25.3 billion energy products it had promised to buy from the US, creating more questions about the viability of the Phase-1 Trade Agreement, which the two sides signed at the beginning of the year.

China’s imports of crude oil, liquefied natural gas (LNG), metallurgical coal, and other energy products amounted to about $1.29 billion by June this year, according to Reuters calculations based on Chinese customs data.

While China’s American energy product purchases have accelerated recently with the re-opening of the economy, analysts state that weak energy prices and worsening relations may not reach the purchasing target Beijing committed to in the Phase 1 agreement in January.

Michal Meidan, director of the Oxford Energy Research Institute, said that Beijing could be expected to speed up its purchases to show goodwill, but it was now nonetheless less likely to meet the requirements of the deal.

In the US, the White House, Republicans, and Democrats fail to agree on a new aid package that they are negotiating to absorb the blow the economy received by the coronavirus outbreak.

Treasury Secretary Mnuchin and White House Chief of Staff Mark Meadows will head to Congress again to sit down with the Republican and Democratic leaders.

As the parties clash over the unemployment benefits, their extension, a Trump-proposed income tax cut, and the size of the package, the US dollar index saw a low of 93.27 against a basket of peer currencies but kept its modest upward momentum of the recent days.

Eurostat, the European statistical office, announced that the prices at the factory entrance increased by 0.7% monthly in June in the 19 countries that share the same currency. Economists were expecting an increase of 0.5%.

Producer prices fell by 3.7% in June compared to the 3.9% drop expected by economists. A fall of 5.0% was recorded in May.