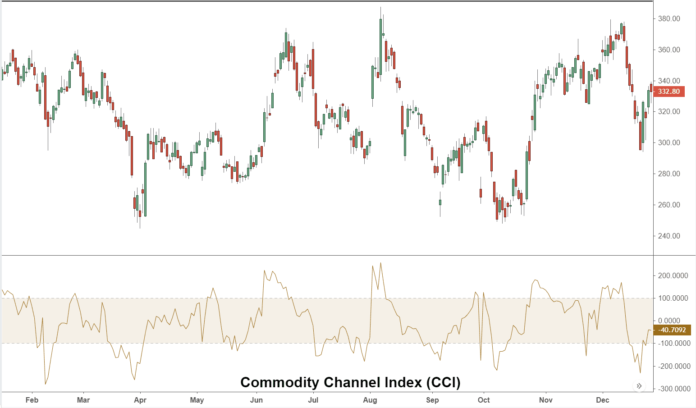 Commodity Channel Index was firstly introduced by Donald Lambert in 1980. Initially, he wanted to analyze and confirm the cyclical turns in commodities. However, the indicator proved to be versatile and applicable to other asset classes.

CCI is a momentum-based oscillator. Simply speaking it is calculated as a difference between the current price and simple moving average over a given period. For scaling purposes, Lambert used a constant at 0.015 to ensure that approximately 70 to 80 percent of CCI values would fall between −100 and +100. Using more periods in a calculation, more values will fall in the range.

CCI will be high when prices appear to be higher than average, and vice versa. It helps identify trend strength. When prices are higher than the average it indicates strength. Low and negative readings show weakness. Thus, CCI could be also used as an indicator price extreme’s, the overbought and oversold areas. However, there are no clear bounds separating those levels. The interpretation is more subjective. Normally, the CCI typically oscillates within the range of +100 and −100. Values higher than +100 imply an overbought area, while values lower than −100 imply an oversold area.

As CCI measures a security’s variation from the statistical mean it helps in identifying price reversals. Moving above +100 is regarded as entering a strong uptrend and a buy signal is given. The position is closed when the CCI value falls below +100. Conversely, moving below −100 is regarded as a strong downtrend and a sell signal is given. The position should be closed when the CCI rises above −100.

Divergences could also be identified. A bullish divergence forms when the price records a lower low and CCI forms a higher low, indicating slowing downside momentum. A bearish divergence occurs when the price hit a higher high but CCI forms a lower high indicating slowing upside momentum. Traders should be cautious in interpreting these signals as divergences can be misleading in a strong trend. Numerous signals could appear before the actual divergence.