Chinese Ministry of Finance announced on Wednesday the exemption of 16 types of American products from additional retaliatory tariffs, a decision valid for a year and taking effect next week. Beijing’s move seems to be a goodwill gesture to Washington ahead of negotiations in October aimed at ending the trade war.

Germany’s Finance Minister Olaf Scholz said on Tuesday that firms worldwide were waiting for an improvement in the Sino-US trade relations. Scholz added the trade dispute needed a solution quickly.

“Everywhere in the world companies are waiting to finally get a positive signal that things are moving in another direction again so they can finally invest. It is urgently necessary for the U.S. and China to reach an agreement in the trade dispute,” Scholz told the Bundestag lower house of parliament.

Speaking on the state of the German economy, he said Berlin was ready to pump “many, many billions of euros” into its economy as a countermeasure to a potential slowdown in growth.

“It will be very important for us as the largest economy in the middle of the European Union, whether we are actually able to counteract a negative economic trend. With the solid financial foundations, we have today, we are in a position to counter an economic crisis with many, many billions of euros, if one actually breaks out in Germany and Europe,” Scholz said.

South Korea’s Trade Minister said Wednesday that Seoul was planning to file a complaint against Japan at the WTO over the latter’s tighter export controls. Minister Yoo accused Tokyo of acting “politically motivated” and “discriminatory” in a deepening diplomatic crisis stemming from the two countries’ wartime history. 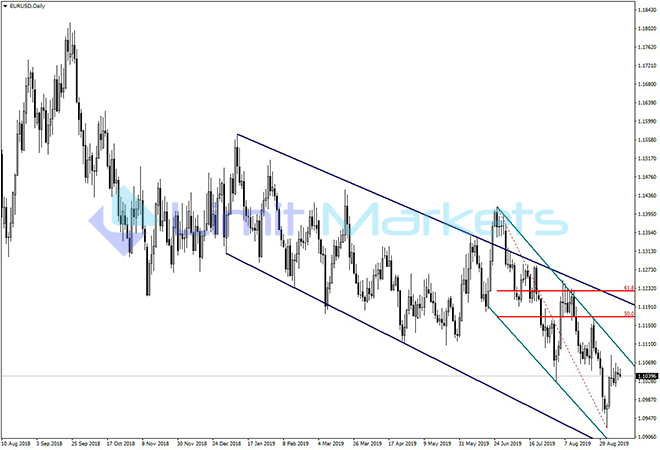 The common currency is in the second day of a slight drop but the weekly upwards momentum goes on ahead of the ECB’s much-awaited policy meeting tomorrow. The bank’s cut of a 10 basis point interest rate deeper into the negative territory is by now a sure given, along with the start of some sort of stimulus. This particularly after the German Finance boss Scholtz made clear that the economy needed a monetary injection to counter a slowdown and the adverse effects of the Sino-US trade war. Chancellor Angela Merkel joined him in stating the harm the war was creating. The pair price, for now, remains near the upper band of the inner falling channel but aiming for 1.1020. If the fall resumes, then we will watch 1.1000. Still below 1.0980 provides support. In the event of a rise, 1.1060 and later 1.1085 are to be followed. 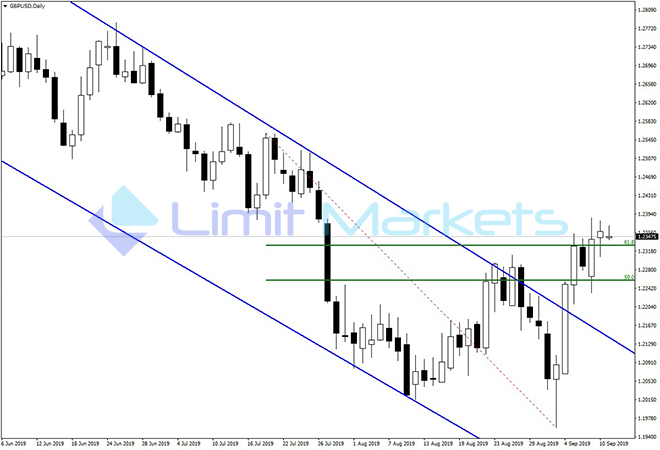 The pound has entered a phase of muted trading after the UK Parliament went into prorogation following repeated defeats it delivered to the hardline Brexiteer prime minister Boris Johnson. For now, investors are eyeing next moves by Johnson and the Labour-led opposition which hopes to avert a no-deal divorce from the EU. The talk of a snap election, a resignation by Johnson, another Brexit referendum proposal by Labour are all on the table until next month when Johnson is legally obliged to ask the EU for another postponement to the Brexit -to which he would prefer to be ‘dead in a ditch.’ As such, amid all the remaining risk factors and political turmoil, the surer direction for the pound is still downwards. But the recent gains above the 61.8 percent Fibonacci retracement level are preserved for now. If the pair price manages to move further up, 1.2370 and later 1.2400 levels will be followed. In the event of a drop below the Fibo line, 1.2320 will be eyed. Then, 1.2300 and 1.2275 will be watched. 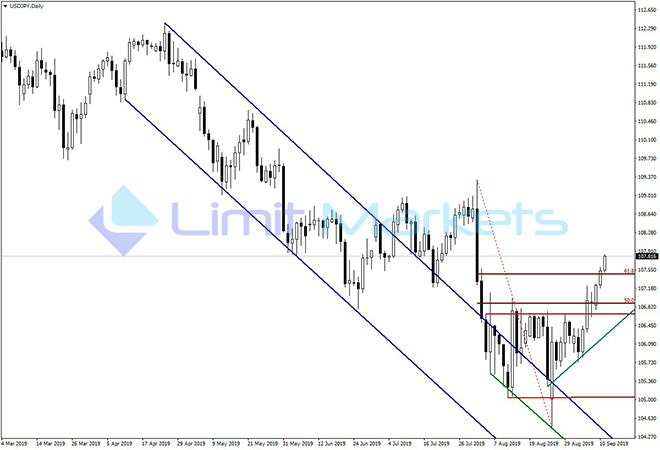 An impressive third week of gains by the strong US dollar against the weak Japanese yen that now appears to have reversed the earlier course set on the Fibonacci retracement tool. The pair price’s breach of the 61.8 percent Fibo level now opened the way for the further rise on the chart ahead of next week’s US Fed monetary policy meeting with lots of questions surrounding the central bank’s rate decision. US PPI figures will today be important for the investors of the Japanese yen. However, the yen is set to weaken further amid the bleak economic outlook in the country as PM Abe reshuffled his cabinet but kept the finance minister Aso. The level 108.00 will be crucial if the rise in the pair goes on. We will later watch 108.40 and perhaps even 108.70 to see if a steep fall last month is corrected. In the event of a reverse situation, 107.45 on the 61.8 Fibo and 107.20 will be followed. 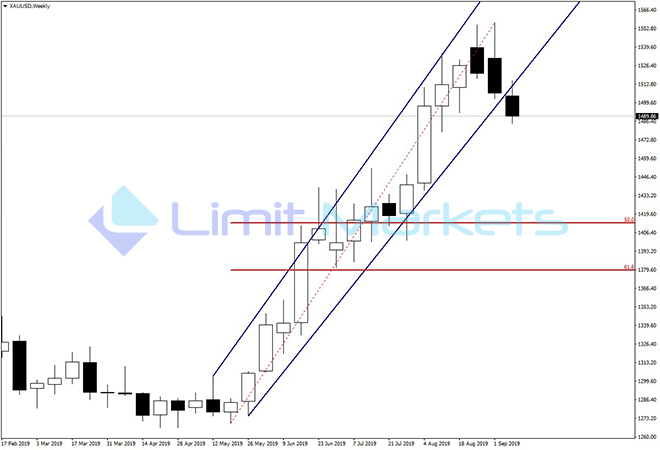 Precious metal prices are now in an almost-confirmed third week of losses below the lower band of the rising channel and the 1500 threshold. A little bit of optimism pumped by the US and Chinese officials appear to be enough for investors to go risk-on and leave safe-haven assets. Beijing’s latest gesture for Washington to exempt more than a dozen American products from retaliatory tariffs added to the optimism for an eventual Sino-US trade deal -which Germany urged. The price still has the potential to come down to 1484. 1480 and later 1474 are to be eyed. In the event of a flare-up in the trade tensions, we will watch 1500 and later 1510. 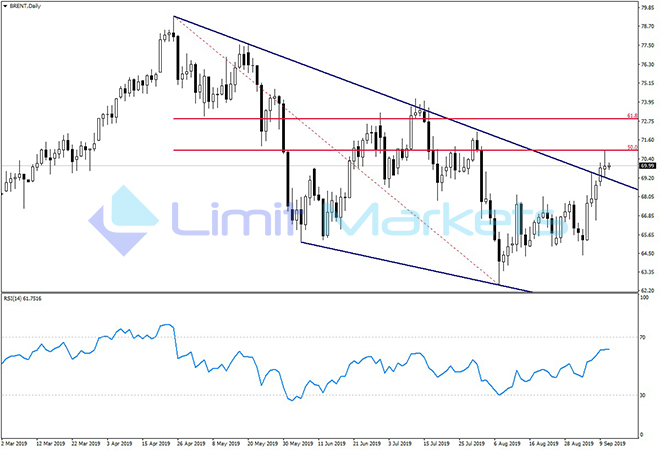 Oil prices continue to rise over OPEC members’ commitment to the cartel’s supply cut policy. And the additional incentive for buyers was a fall twice larger than the expected in the US crude oil inventories which were down by 7.2 million barrels in the week that ended on September 6, to 421.9 million. Later the day, the US Energy Information Administration’s crude oil inventories will be watched, with the expectations pointing at a sharp drop. The Brent price in the meanwhile went on with its rise above the upper band of the falling trade. The price perfectly hit the 50 percent Fibonacci retracement level and retreated. As the price goes near the oversold area on RSI for the first time in months, 70.40 is the first resistance buyers will face before stumbling upon the earlier confirmed 70.90 that corresponds with the 50 Fibo pct. If the prices breach there and persist, then 71.20 will be followed. In the event of a potential draw-down, 69.60 and later 69.00 will be watched. 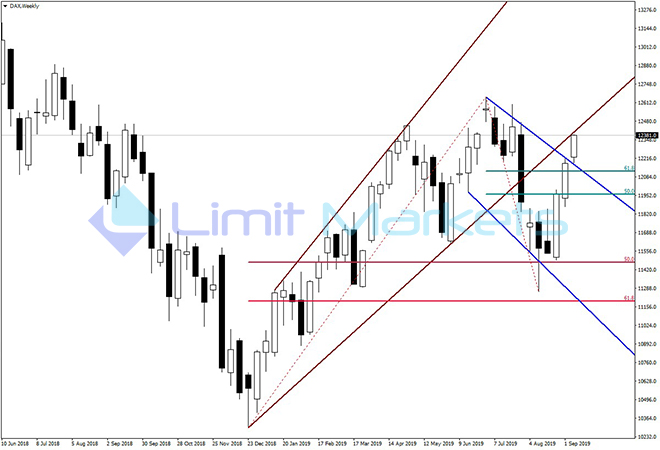 The German index opened the day with a slight upwards gap near the lower band of the larger and older rising channel. The Dax 30 appears to have gather confidence from remarks by the German Finance Minister Scholtz who vowed to pump ‘many many billions of euro’ into the slowdown-stricken economy amid the threats stemming from the Sino-US front. On the chart, 12 400 is now within striking distance. If breached, 12 450 and later 12 470 can be followed. Although less likely given the optimism ahead of the ECB monetary policy on Thursday, a fall in the index will retrace it back to 12 320 where the day started. Still, below 12 300 will be supportive. 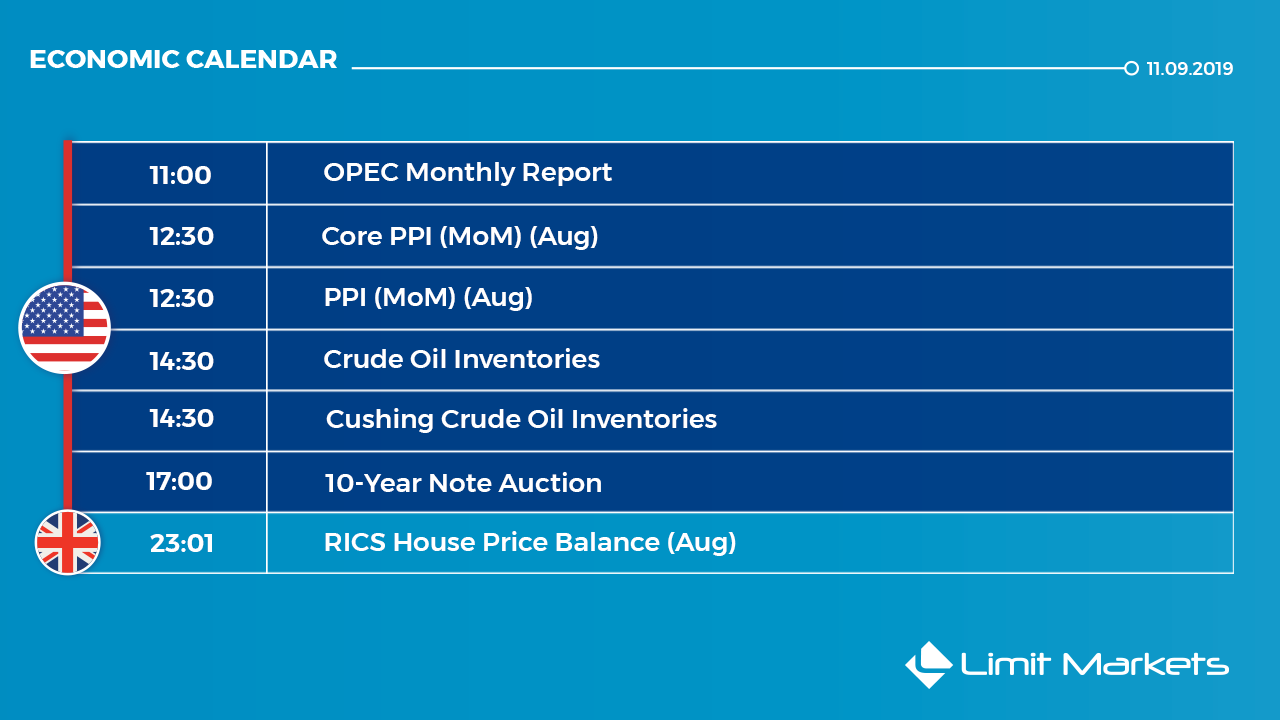