The private research group German Macroeconomic Policy Institute (IMK) warned in a Thursday-published report that there was an “almost 60% chance” that the Eurozone’s largest economy could descend into recession. The monthly index assessing the German economic health set the risk of a recession at 59.4%. The odds were raised from 43% last month. This comes as the biggest recession risk warning since after the end of the last decade’s global financial crisis.

With a recession on the horizon, the European Central Bank is most likely to cut interest rates during its Thursday policy meeting by at least 10 basis points further into the negative territory and launch a stimulus program that may include asset purchases.

US President Donald Trump on Wednesday once again argued for low-interest rates and the extraordinary step of pushing them below zero for that matter as markets worldwide await next week’s Federal Reserve meeting.

“The USA should always be paying the lowest rate. No Inflation! It is only the naivete of Jay Powell and the Federal Reserve that doesn’t allow us to do what other countries are already doing. A once in a lifetime opportunity that we are missing because of “Boneheads,” Trump tweeted.

On the Sino-US trade negotiations, Trump welcomed China’s decision to exempt some US goods from tariffs. In reply to the gesture, Trump announced a short delay from October 1 to October 15 to scheduled tariff rises on Chinese goods worth $250 billion.

The Organization of the Petroleum Exporting Countries (OPEC) on Wednesday slashed its forecast global oil demand next year due to economic slowdown, US-China trade war, and the Brexit. In a monthly report, OPEC said oil demand would grow by 1.08 million barrels per day (bpd), that is 60,000 bpd less than the previous estimates. 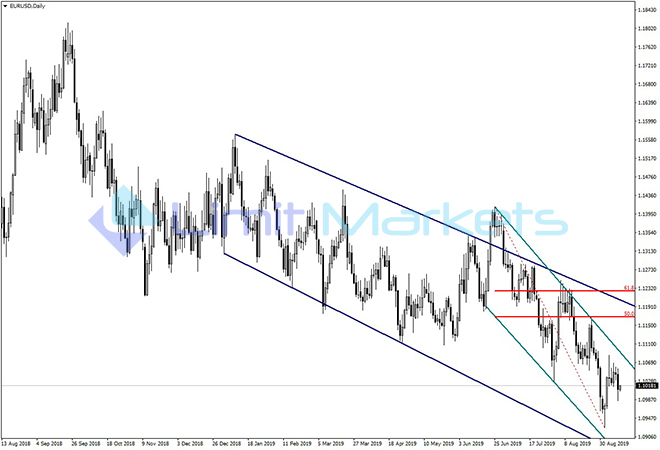 Investors of the common currency are all eyes and ears about Thursday’s policy meeting of the ECB which is widely expected to go for an interest rate cut of 10 basis points further into the negative territory. But more importantly, a stimulus program, including asset re-purchases, are anticipated as the central bank’s President Mario Draghi might make the last stand in the face of a looming recession before he leaves. The pair is driven slightly up but rather cautiously inside the inner falling channel ahead of the policy decision. Depending on the scope of the stimulus, we might see a further fall in the euro in which case 1.1000 becomes the first line of support. Once breached, we might follow 1.0970 and later 1.0930. On the flip side, we will watch 1.1040 and later 1.1070. 1.1100 remains an upward target. 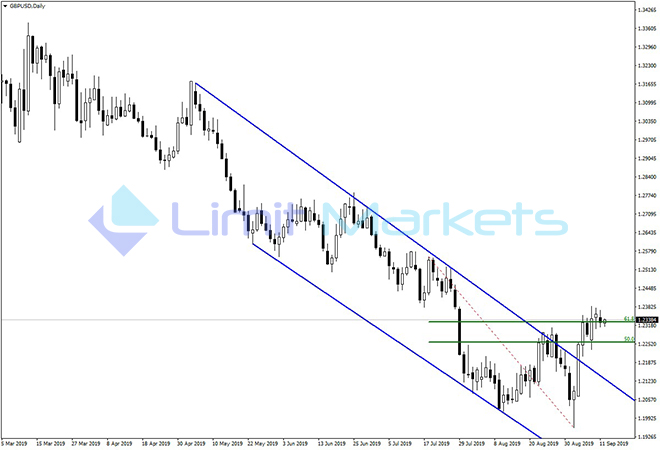 The pound sterling went down after a Scottish court ruled on Wednesday that UK Prime Minister Boris Johnson’s prorogation of the Parliament was unlawful. As calls increased for lawmakers to return to their legislative duties, the price went below the 61.8% Fibonacci retracement level. With still no clear indications of what might happen on October 31, the Brexit day, the price currently hovers around the said Fibo. In the current outlook, the price is looking at 1.2370 and later 1.2400 targets which then can take the pair to an eight-week high near 1.2430. With little seen from the political arena in London about a solution, the long-term downward trend remains valid. A drop in price will first test 1.2320 if it comes below the Fibo line again, from there on it can move towards 1.2300 and later 1.2270 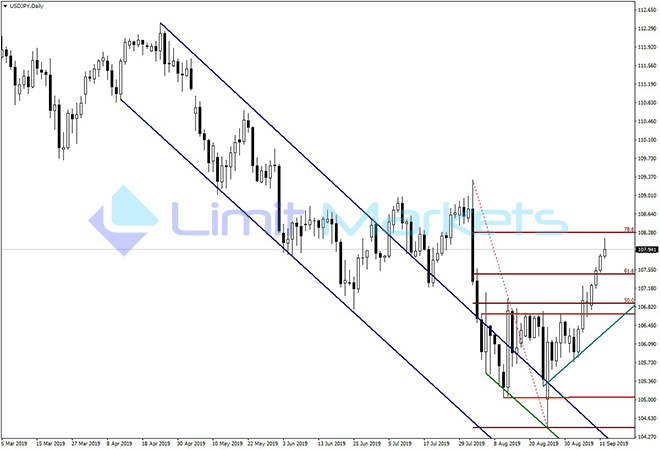 The US dollar’s strength was fortified after the higher-than-expected PPI figures on Wednesday. The Japanese then was thus weakened even more in the resumption of a now three weeks-long trend. Today’s US CPI figures are eagerly awaited. Any drastic difference in the inflation will be taken into account during the Federal Reserve’s next week policy meeting. A higher-than-stronger inflation figure will undermine arguments for a rate cut -something President Trump demands to go subzero. As the pair price rise further away from the previous falling channel, 108.27 at the 78.6 Fibonacci retracements will be limiting the progress. If that line is broken, 108.50 will then be a new peak for the past sessions. In the event of a fall, 107.80 and later 107.50 will be watched. 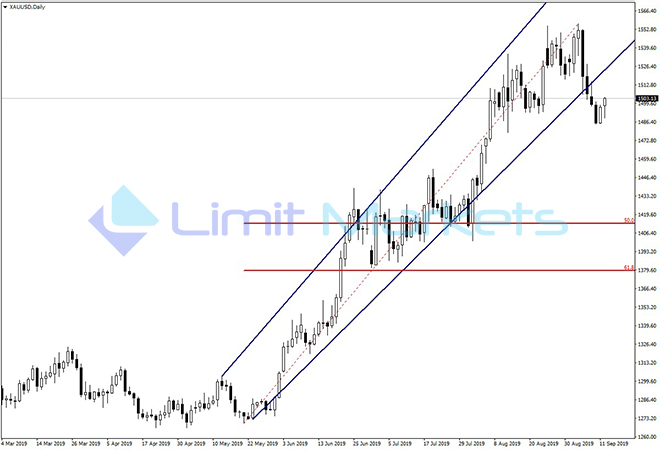 Precious metal prices gained earlier despite ‘gestures’ of goodwill between the US and China as the parties prepare for a round of negotiations in October to end their hard-hitting trade war. But the risks of trade disruptions, a recession in Germany and a no-deal Brexit scenario all remain in place while the long-term upward trajectory reinforces itself. The price currently is on course to move back into the rising channel we have been following for four months now. 1510 is within reach, now that the price has come back above 1500. We can later watch 1515 and 1522 in the event of a continued rise. However, it’s important to take into account the upcoming consumer inflation data from the US. A stronger-than-expected figure will push gold prices down along with the possibility of a rate cut by the US Federal Reserve next week. In that case, 1496 and later 1490 will be tested again. 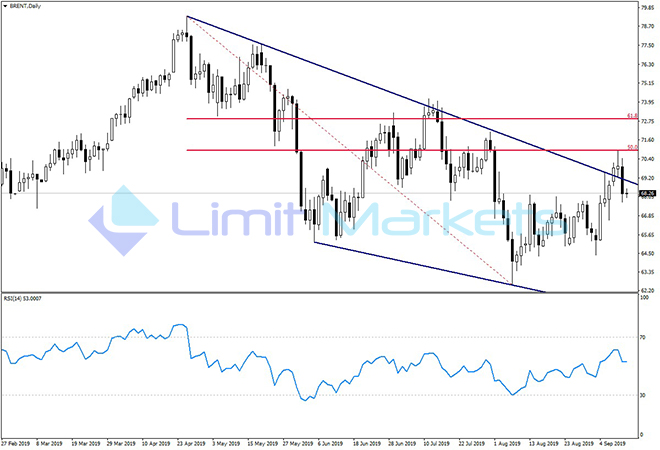 Oil prices continued to fall on Thursday falling reports that US President Trump was mulling easing sanctions on Iran after the resignation of his hawkish national security advisor John Bolton. Any reconciliatory move by Trump towards Tehran could potentially boost global crude supply with the re-participation of Iran in the market. A bleak report by the OPEC added to the price pessimism as the US Energy Information Administration reported a fourth week of falls in inventories as they dropped by 6.9 million barrels to 416.1 million barrels in the week to September 6. If brent price makes a comeback, 68.70 and later 69.00 will be followed. Still upwards, 69.40 above the upper band of the descending formation will be important. 68.00 has provided strong support. If that line is breached, 67.70 will be watched. 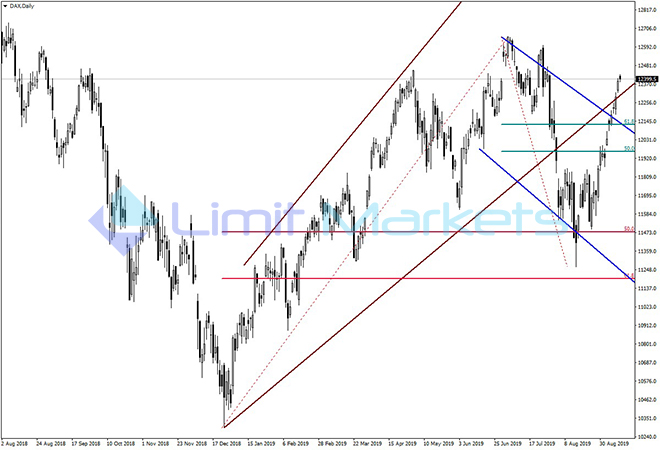 The German index continues to be in third consecutive week gains ahead of the ECB’s rate-setting meeting and monetary policy. The Dax 30 opened with an upwards gap on Thursday on the hopes of wide-ranging stimulus program by the ECB that will be governed for the last time by Super Mario. But the index started to waver downwards after a recession risk was heightened to almost 60 percent by the German Macroeconomic Policy Institute (IMK). In addition, investors are turning their attention to the US consumer prices data. The current fall is likely to be corrected during the day and as ECB decisions’ details come out. 12 420 and later 12 450 can be followed before 12 470. In the event of continued momentum for the bears, 12 370 and then 12 350 will provide support. 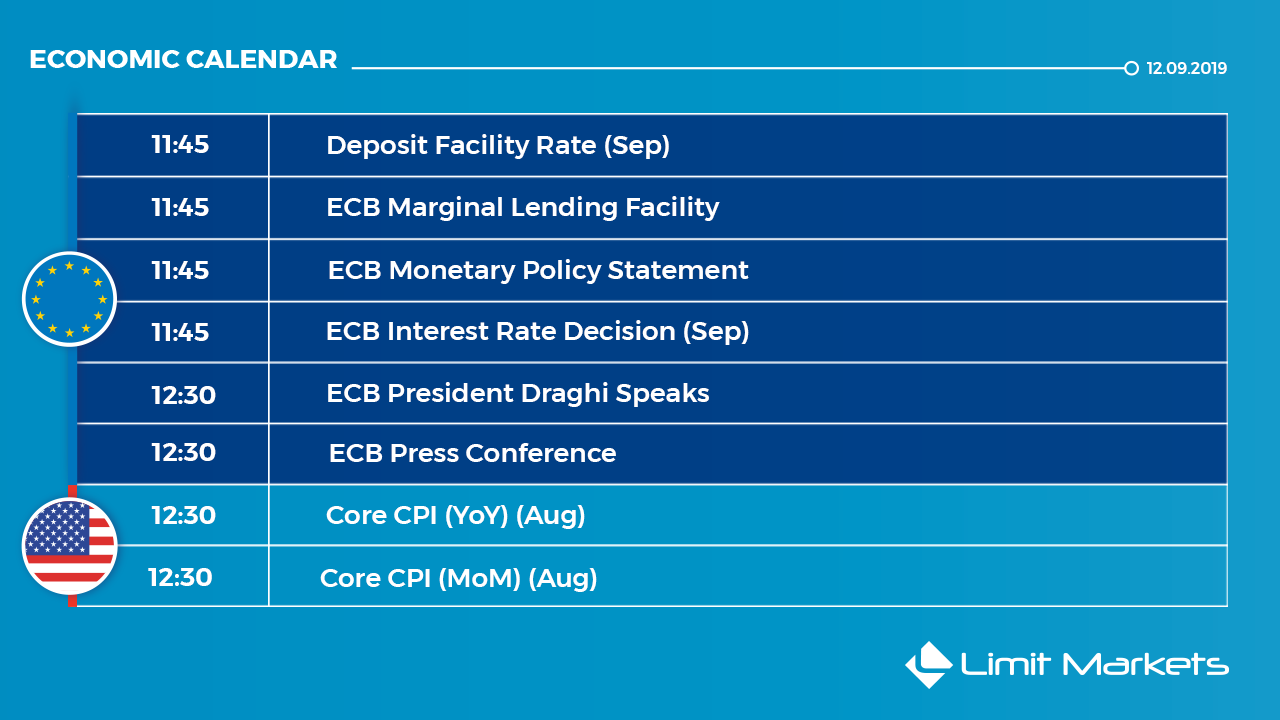