US President Donald Trump told reporters on Saturday that talks to resolve the trade war with China were going “very nicely.”

Trump said his administration would make a deal only if it was the right one for the US.

“The trade talks with China are moving along, I think, very nicely and if we make the deal that we want it will be a great deal and if it’s not a great deal, I won’t make it. I’d like to make a deal, but it’s got to be the right deal. China very much wants to make a deal,” said.

“They’re having the worst year they’ve had in 57 years. Their supply chain is all broken, like an egg, they want to make a deal, perhaps they have to make a deal, I don’t know, I don’t care, that’s up to them,” he added.

Earlier on Friday, he repudiated that the US agreed to mutual cancelation of existing tariffs as both sides prepare to sign the Phase-1 deal.

Producer price index in China, a measurement of costs for goods at the factory gate, fell by 1.6 percent year-on-year in October, data by the country’s National Bureau of Statistics (NBS) showed on Saturday. The figure was much larger than the the 1.2-percent decline in September and the most in over three years.

On a monthly basis, the PPI rose by 0.1 percent last month.

Policymakers at the Bank of Japan discussed during their last month meeting whether extra easing measures were needed to achieve the inflation target, a summary of the meeting released on Monday showed.

“In the current situation where risks are skewed to the downside, the Bank should continue to examine whether additional monetary easing will be necessary,” another board member said, as the Japanese economy deal with risks from trade disputes.

In Spain, the far-right Vox came third in a repeat snap elections on Sunday. The Vox increased the number of its seats at the Parliament 52 seats, up from 24 in April. Although acting Prime Minister Pedro Sanchez’s Socialists won the 120, it will still need the support of other left-wing parties such as Podemos or center-right parties to form a coalition government. 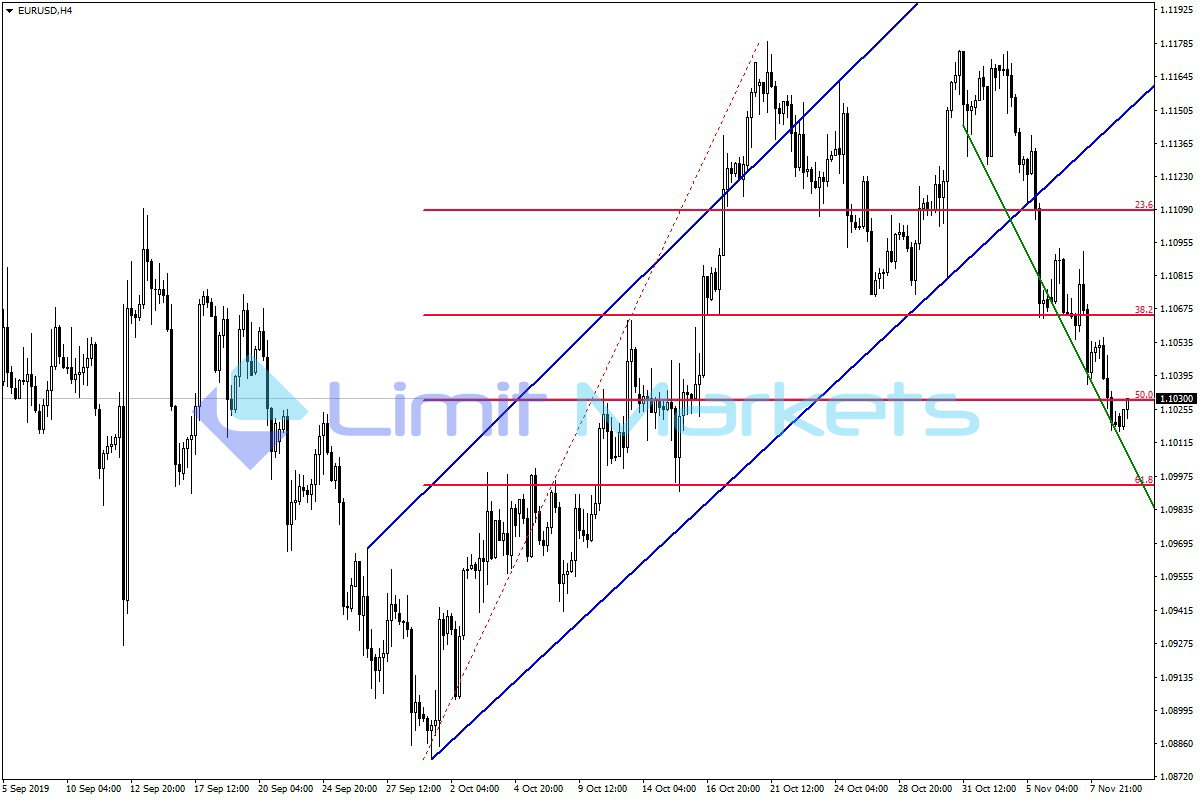 The common currency is rising once again after last week’s losses against the strong dollar, although the pressure due to continued uncertainties about an eventual Sino-US trade deal remains. The rise of the far-right Vox in the Spanish elections can be a source of concern. With the pair price almost at the 50 percent Fibonacci, 1.1040 and then 1.1065 at the 38.2 Fibo should be followed. Still above, we will watch 1.1080. In the case the fall hastens, 1.1015 and then 1.1000 will be eyed. 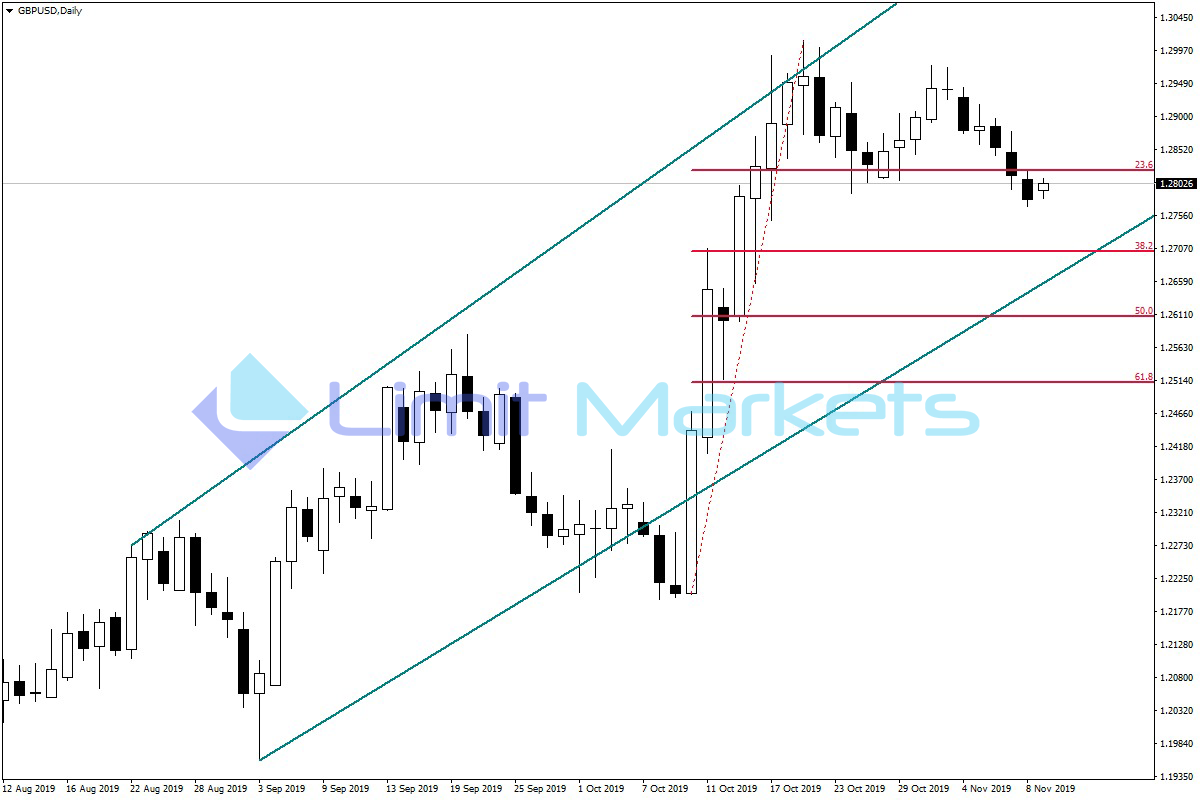 The UK pound is entering what might turn out to be an ascending trajectory as British parties, having launched their snap elections campaigns, vye for power amid the deadlock over the Brexit. The sterling is now a little more affected by external factors, such as the US dollar’s strength. With the pair price rising, investors should first watch 1.2820 at the 23.6 Fibo retracement. Later 1.2850 and then 1.2870 can be followed. 1.2770 and then 1.2750 could be seen as downward targets. 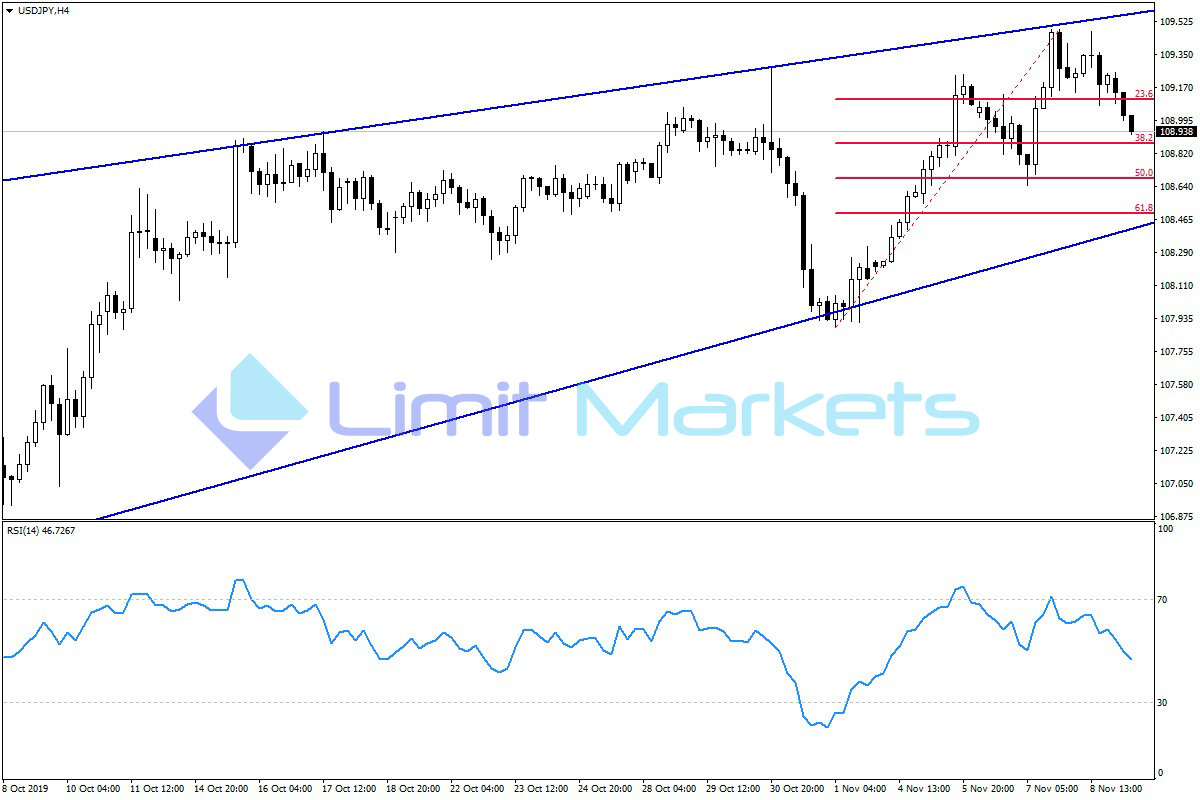 The US dollar slipped on Asian Monday open versus the safe haven Japanese yen as six month-long anti-China protests in Hong Kong turned bloody as police opened fire on demonstrators and wounded a person. US President Trump’s remarks refuting a rollback on tariffs with China is also frightening investors into the bosom of less risky assets. The pair price is currently 108.80. If breached we will follow, the recent low at 108.64. Further below, 108.50 near the rising channel’s lower band should be watched. In a reverse movement depending on the geopolitical developments, 109.10 at the 23.6 Fibonacci retracement and then 109.30 should be followed.109.50, the most recent top near the upper band of the formation provides resistance. 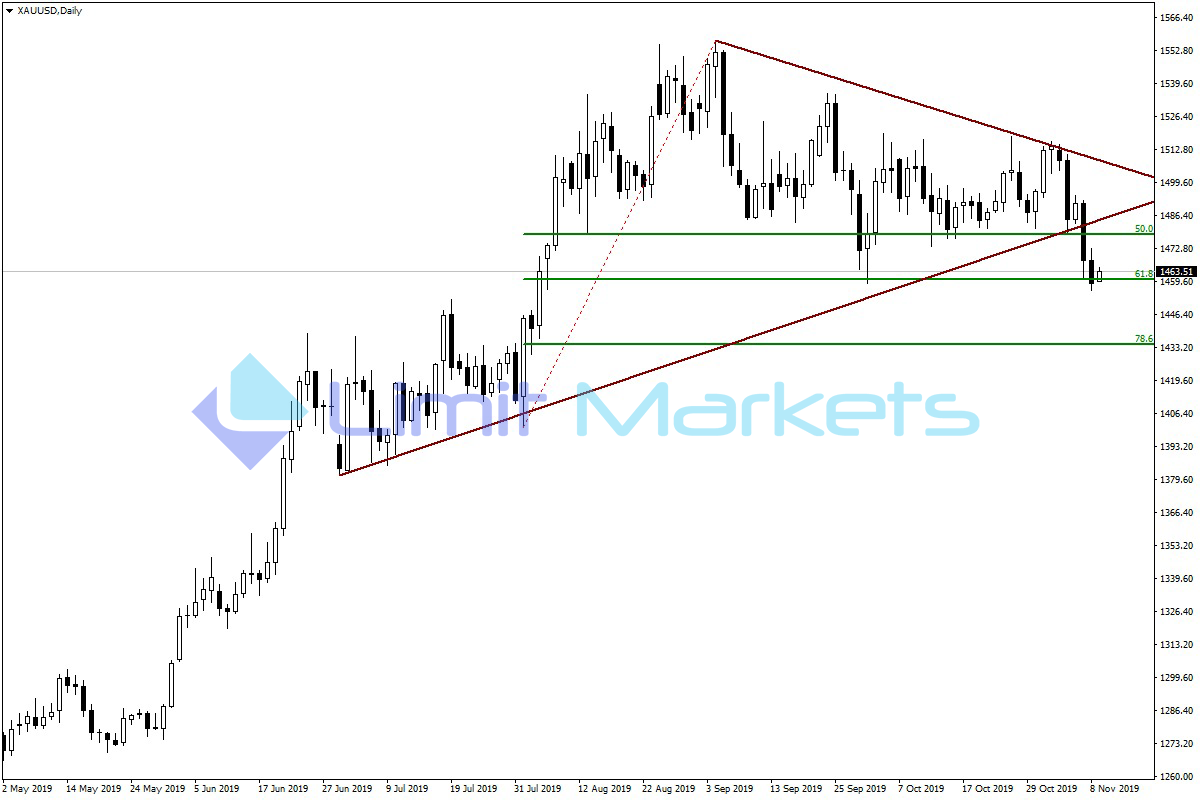 Mixed signals over the fate of the so-called Phase-1 deal between the US and China is propping up precious metal prices. The latest remarks by the US President Trump helped stop the fall in gold prices that was initially induced by an overdose of hopes earlier last week. Gold price is currently aiming for 1470 level. If broken, should watch 1473 and the 1484 that is close to the inner side of the closing triangle. In the even of a continuation to the precious metal, then 1460 and 1455 must be followed. 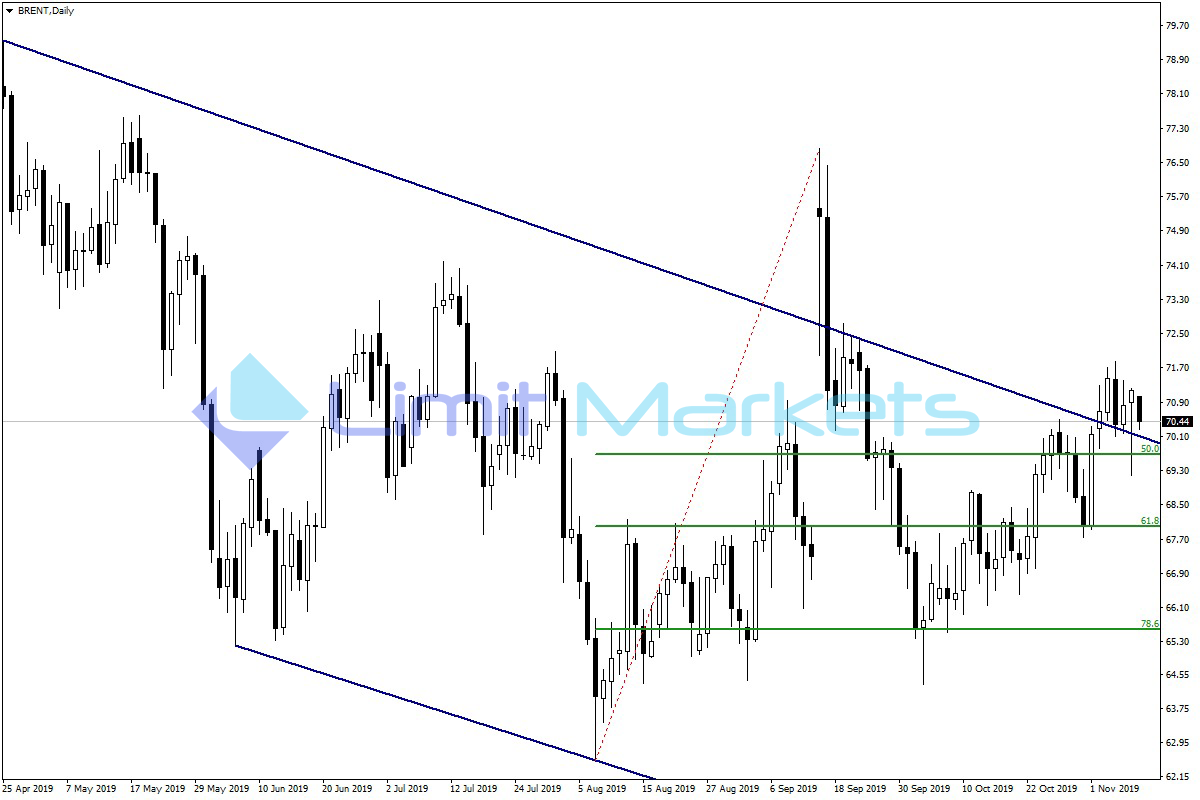 Oil prices fell on Monday in the midst of fresh doubts whether the US and China can actually achieve a deal that will end their trade war. Oil market prospects have also been dampened by the strengthening US dollar. The brent price is trying to hold its ground above the upper band of the falling channel but the pressure might push it down to 70.00. If the finds momentum then 69.70 at the 50 percent Fibonacci should be watched. 69.20, last week’s low, must be followed. In the event of a reversal in price, 70.60 and then 71.00 will be eyed. Further above, 71.20 awaits us. 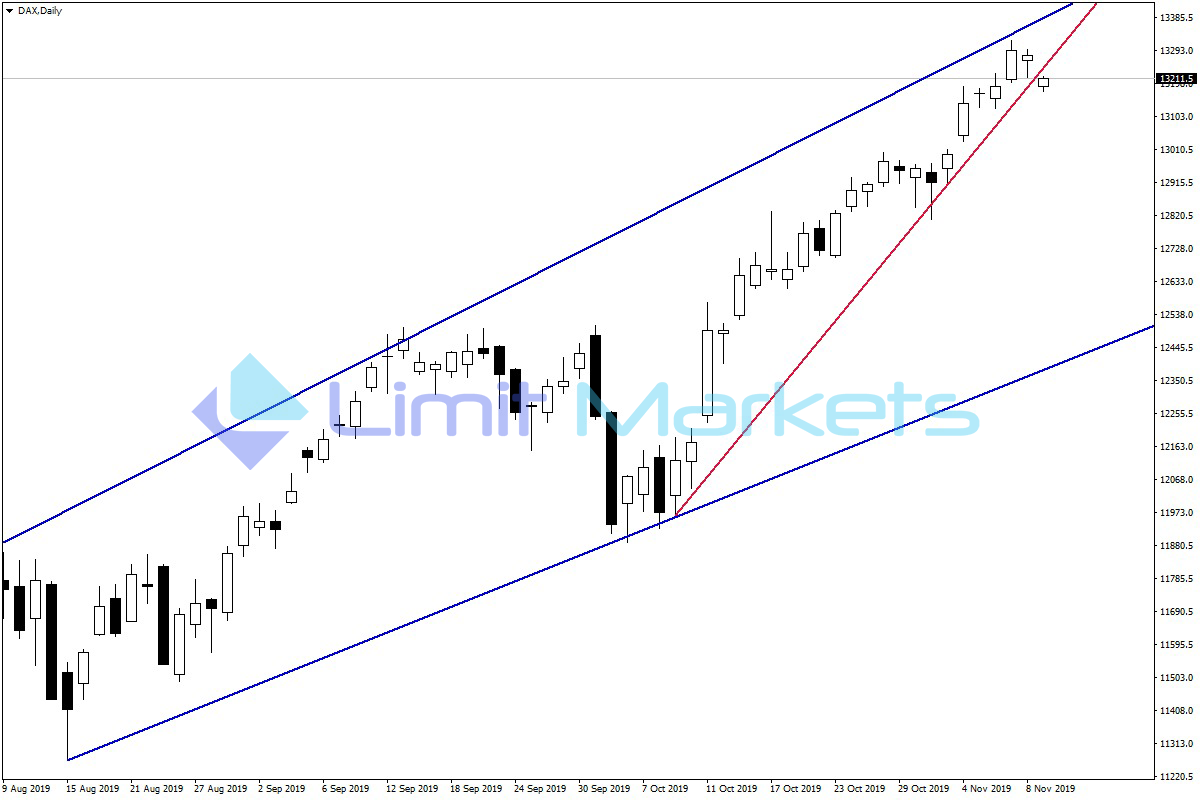 The German index sharply dropped with a gap to below the recent rising trend in red. The Dax 30 fell over renewed doubts that China and the US could finalize the Phase-1 deal after President Trump refuted earlier remarks by both American and Chinese officials that the two countries had reached an understanding to roll back existing tariffs. However, European investors quickly recovered strength and the index is now rising again well above 13 200. If the ascent goes on, 13 250 and 13 300 can be watched. Further above, 13 330 should be followed. In the event of another fall, 13 170 and then 13 140 will provide support.