US President Donald Trump’s much-awaited speech at the Economic Club of New York on Tuesday disappointed the markets as it provided little to no new information on how the China-US talks have been faring. He repeated all the usual mantra on how Beijing badly needed a deal, that it has cheating the US for decades, that he ended the unfair practices and that they would ‘soon’ finalize it but fell short of revealing any time or venue for a signing ceremony for the said deal.

His remarks steadied the dollar in international markets as he threatened even harsher tariffs if the Sino-US negotiations failed. Stocks in Asia and North America were stressed in the wake of the speech that was rhetorically heavy but light in terms of substance.

Trump essentially turned the speech into an election campaign address as he focused and exaggerated figures on the jobs created, businesses brought home from abroad, and trillion dollars-worth growth and, unsurprisingly attacked the Federal Reserve. Trump complained how the Fed was not “playing along.”

The US President will later today be busy watching some of the first public hearings in the House impeachment inquiry against him before he hosts the Turkish President Tayyip Erdogan, much to the chagrin of the Congress.

US Federal Reserve Chair Jerome Powell will also be the center of attention as he appears before a congressional committee today to answer lawmakers’ question about the bank’s most recent rate cuts and the anticipated effects of trade disputes.

New Zealand’s central bank took investors by surprise as it decided on Wednesday to keep its interest rates on hold, at an all-time low of 1%.

The Reserve Bank of New Zealand said in a statement that it felt no urgency to ease its monetary policy further. The kiwi dollar shot up sharply high over 1 percent. The bank, however, left the door open for easing and vowed to act if needed as some expect chances of a cut early next year. 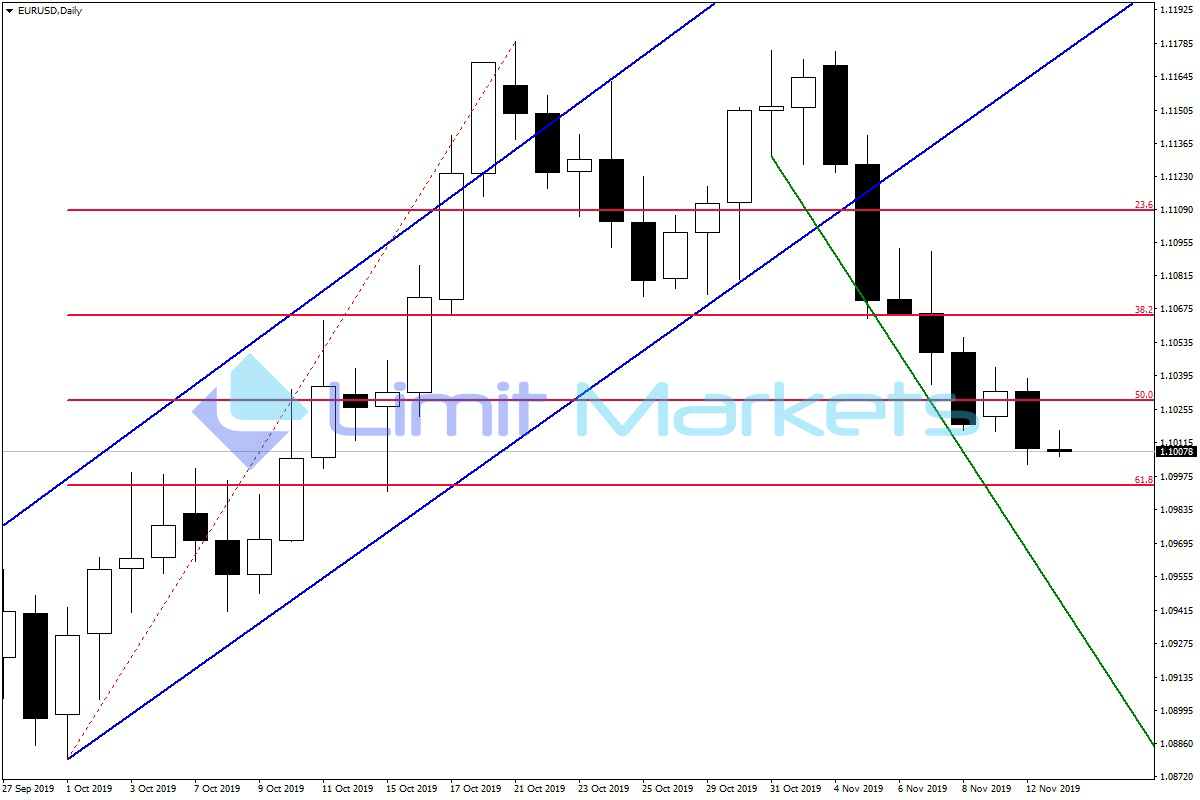 The US dollar was buoyed up as Trump kept up harsh rhetoric against China and also appeared to take a jibe the European Union. The euro was gaining strength earlier over news that Washington was going to announce a postponement to the long-threatened tariffs on EU automotive industry and a positive German Zew economic sentiment report. On Wednesday open though, the pair price is once again in the vicinity of 1.1000 level. If it is broken, we will follow 1.0990 near the 61.8 Fibo retracement. Further below, 1.0970 can be watched. For a reversal in price 1.1030 at the 50 pct Fibo and 1.1050 will come into focus. 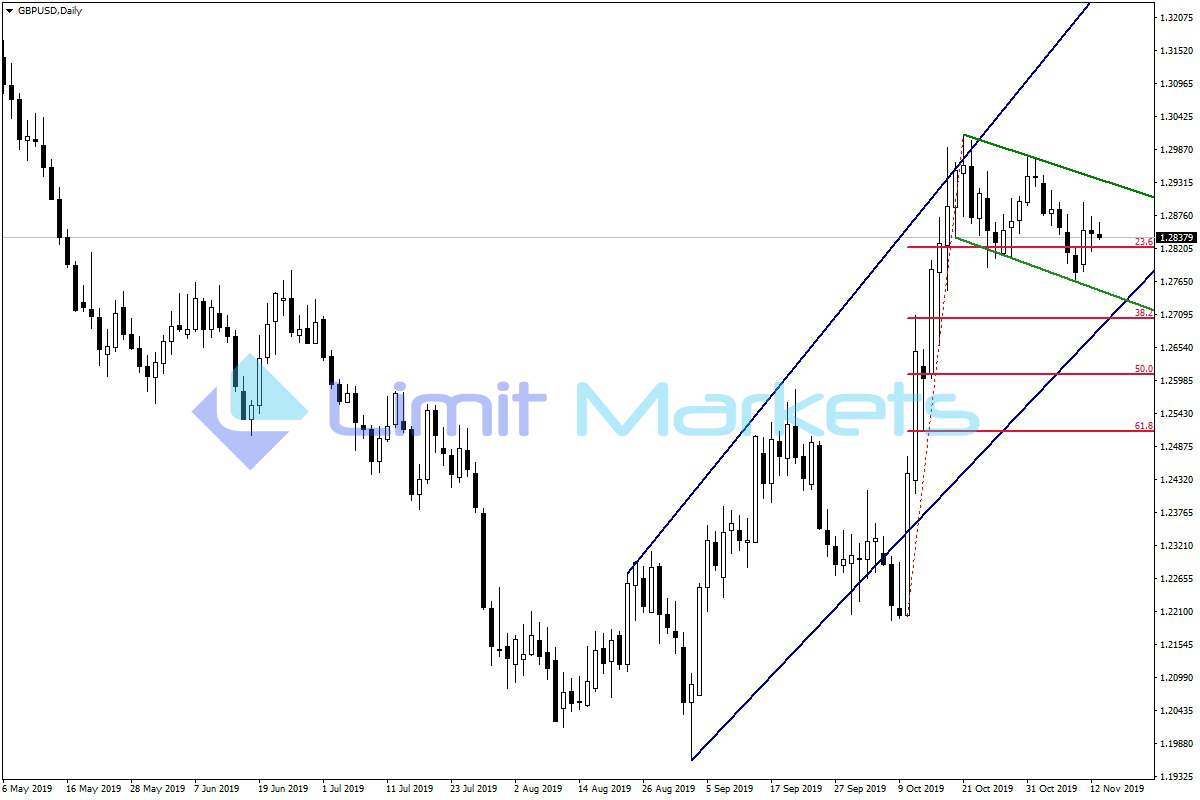 Absent the former everyday fears of a crash-out from the EU in a no-deal Brexit situation, the British pound continues to keep its rather stable position against the US dollar, seeing smaller price movements and no fluctuations. As political party leaders tour the country and candidates field electoral districts, the lull in the pricing might go on. A fall however should take us to 1.2820 at the 23.8 and then 1.2800. In a reversed pricing, 1.2850 and later 1.2870, followed by 1.2900 will be watched. 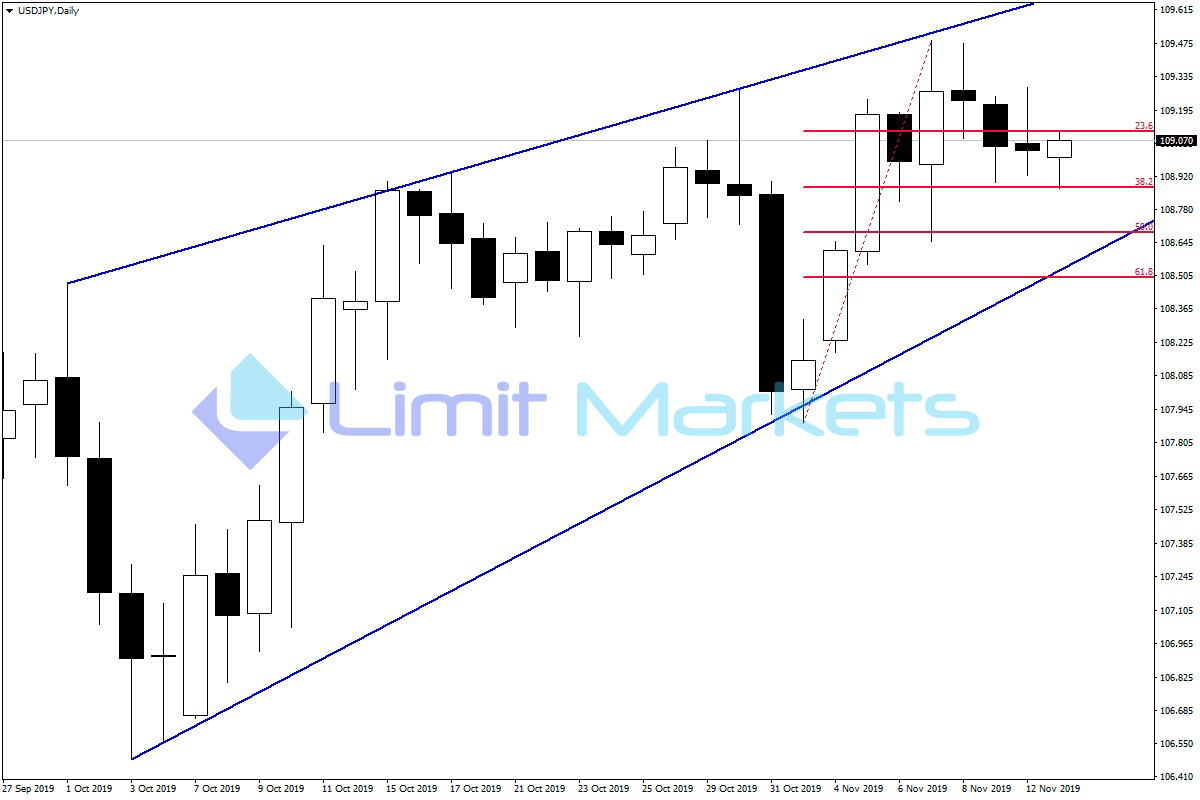 The Japanese yen is largely holding steady against the US dollar in the previous several sessions investors in Asia remain weary of the Sino-US trade war and anti-Communist demonstrations in Hong Kong. The yen is pushing the pair price down as Asia-Pacific markets close as we designate 109.00 and then 108.80 as support levels. In a scenario where the US dollar gets stronger, 109.20 and later 109.30 should be watched. 109.45 remains a farther target ahead of the Japanese 3rd quarter GDP figures on Thursday. 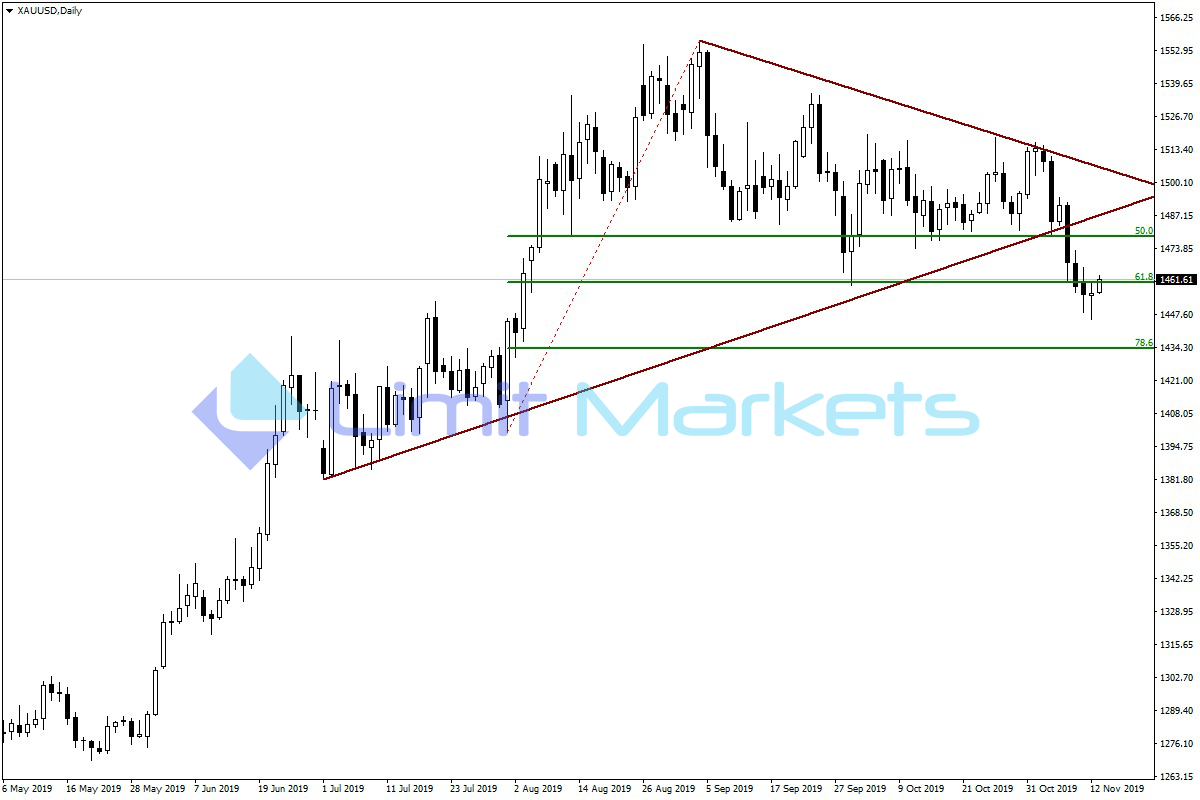 Precious metal prices are up after the sellers earlier failed to find incentive for further pushing them down in the aftermath of US President Trump’s speech at the Economic Club of New York. The markets, given Trump’s harsh rhetoric, now seem to be a little more concerned over the question if Beijing and Washington will achieve a deal before November ends. As gold prices climb, 1467 and then 1472 levels will be important for an upwards trend. Further above, we will watch 1478 at the 50 percent Fibonacci retracement. In the event a positive development in the Sino-US talks is revealed, we will follow 1456 and then 1450. 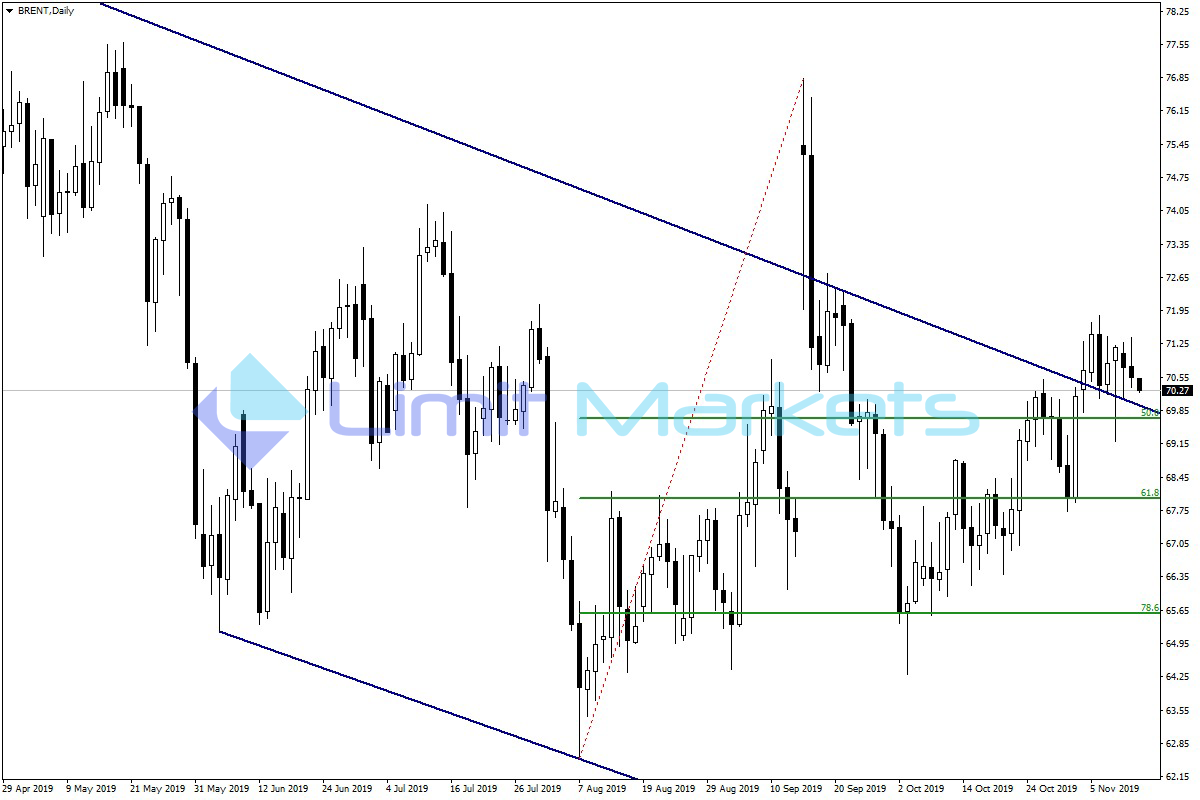 Oil prices took another dive as President Trump failed to provide any detail on any substantial progress in the trade talks with China. The worries over energy demand prospects rose once again, as brent price come close to the defensive line of 70.00- still the first support as the trading day begins in Europe. If the now three consecutive day-long downward trend turns into a full-fledged weekly fall, then further below, we should watch 69.70 at the 50 percent Fibonacci retracement inside the falling the long-time descending channel. A last week dip, 69.20 will be crucial in pricing for the coming days. In a reversal, depending on the data from the US crude stocks, we will follow 70.50, 70.70 and then 71.00 levels. 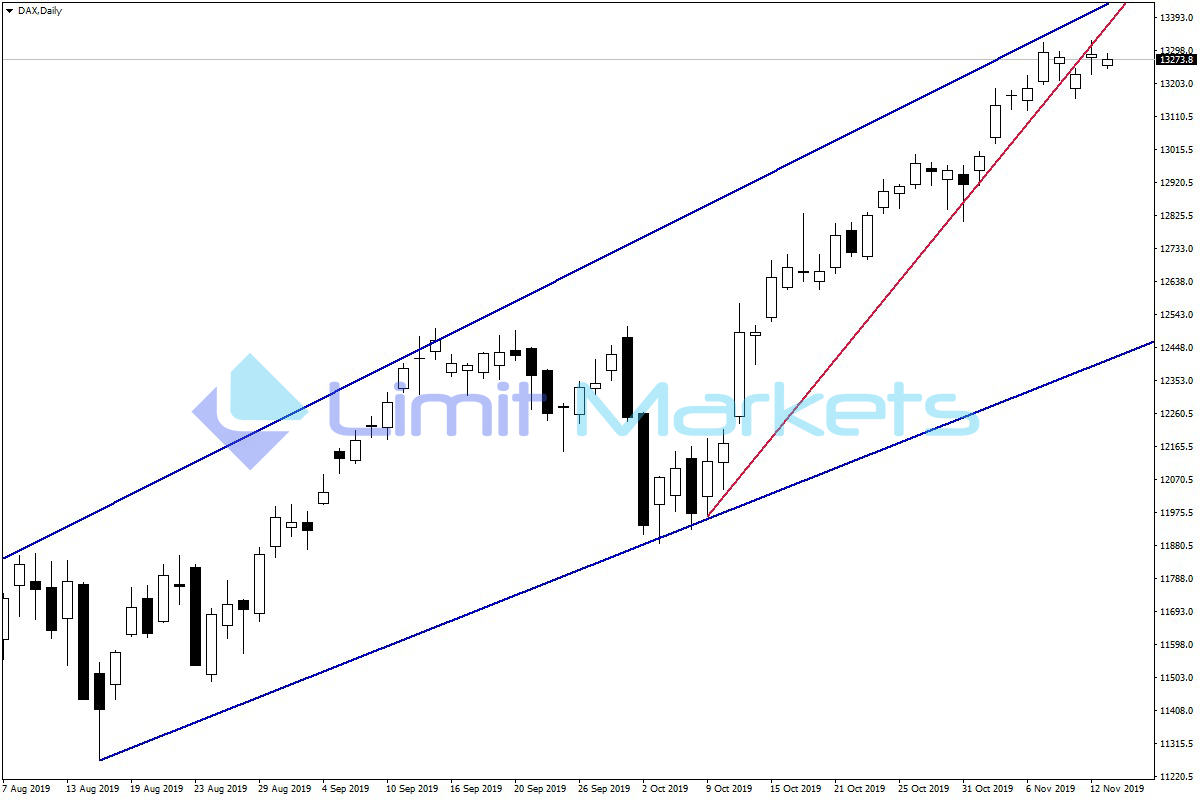 In line with expectations, the Frankfurt-based German index opened on Wednesday with a downward gap, as investors fled from the effects of US President Trump’s New York speech that gave little hope of a trade deal with China. However, it is worth noting that the Dax 30 is rising from the pit it fell and marching back towards the earlier-seen 13 300. 13 350 and later 13 400 -a year-high, can be seen if it turns out the German economy has avoided entering a technical recession when the 3rd quarter GDP figures are released. In an adverse situation, 13 230 and 13 180 levels should be followed.