US President Donald Trump said in a letter to the Congress on Monday that Washington had reached a trade deal with Tokyo. Trump stated that the agreement could be put in practice “in the coming weeks” without approval from the US lawmakers. But the did not touch on the issue of his threatened tariffs of up to 25 percent on Japanese auto exports.

Japan’s top negotiator, Minister Taro Aso on Tuesday confirmed the deal and said that the tariffs on auto exports would not be imposed. The deal would also not contain any provisions on foreign exchange rates.

On the rising Middle East tensions, Trump said it looked like Iran was behind the weekend drone attacks on oil facilities in Saudi Arabia but emphasized that he did not want to go to war. Saudi officials said the weapons used originated from Iran.

Iran’s President Hassan Rouhani rejected the allegation that Tehran was behind the attacks that and said the “Yemeni people” were exercising their self-defense right in response to the Saudi-led Arab coalition’s years-long and devastating war against the Houthis.

Japanese Prime Minister Shinzo Abe announced Tuesday he was set to meet with Rouhani at the UN in New York later this month. The attacks sent oil and other energy commodity price soaring most since the 1990 Iraqi invasion of Kuwait.

British Prime Minister Boris Johnson’s visit to Luxembourg where he met with European Commission President Jean-Claude Juncker over lunch did not produce any breakthrough in the Brexit process. “Yes, there is a good chance of a deal, yes I can see the shape of it, everybody can see roughly what could be done,” Johnson said after the meeting but the two sides appeared worried over the actual chances of a deal with less than seven weeks to the day of UK’s departure from the EU.

Juncker and Luxembourg PM Bettel stated that the responsibility to come up with an Irish backstop alternative and a deal palatable to both sides fell on Johnson. 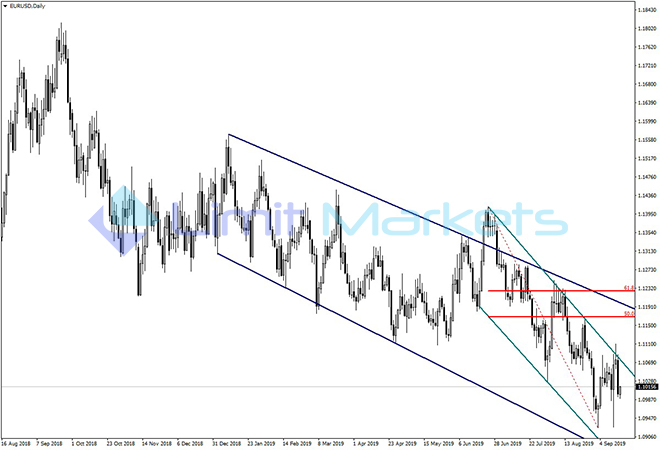 The euro resumes its downward path inside the inner falling channel in the aftermath of ECB’s last week decision of a 10 basis point interest rate cut and the restart of a stimulus in the form of asset purchases. The strong dollar’s pressure waned on Tuesday as the markets await US Federal Reserve’s Wednesday policy meeting from which a rate cut of 25 basis point is widely expected. 1.1026 acts as a strong resistance line. Once broken the pair may head for 1.1060 and later 1.1080 above the upper band of the falling channel. In the event of a continuation to the week’s early fall, 1.0980 and later 1.0950 are to be followed. The ZEW Current Sentiment report on the health of the German and Eurozone economy will give a better idea of where the price might go. 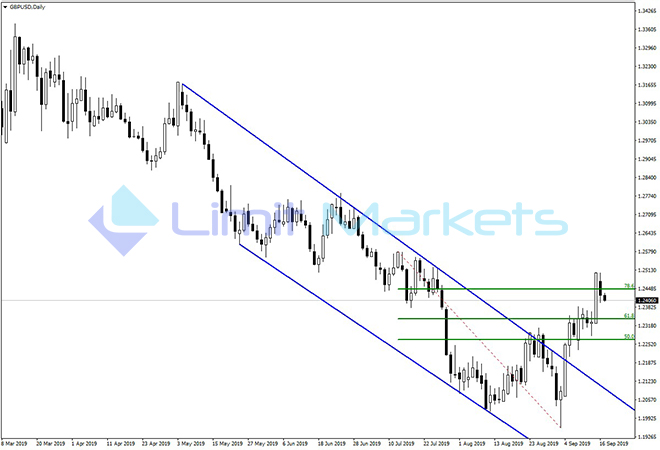 The pound sterling is starting to lose again after it became clear in Luxembourg that UK PM Johnson did not achieve a breakthrough in Brexit when he met with the European Commission President Juncker. The sides largely spoke in hopeful terms but came up with nothing concrete on how to avoid a no-deal Brexit. The pair price is also under pressure from the unusually strong dollar ahead of the US Federal Reserve’s Wednesday rate-setting policy meeting. Having come down below the 78.6 percent Fibonacci retracement level, the price has been receiving solid support from 1.2400. But it seems to be on the verge of being broken, in which case we will follow 1.2380 and later 1.2340 at the 61.8 Fibo as support lines. A fall below there will go for 1.2300. In the event of a rise in the pound, we will follow 1.2430 and later 1.2445 at the 78.6 Fibo. 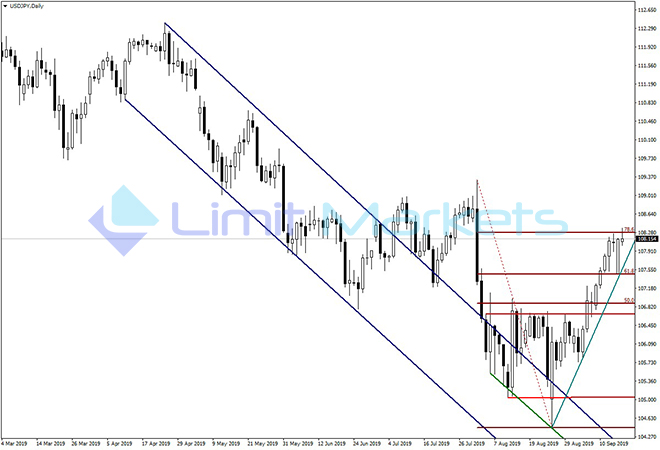 Lucky for the Japanese yen and the BoJ, US President Trump informed the Congress that Washington and Tokyo had struck a trade deal, although Trump stopped short of making clear if he was exempting Japanese automotive exports from his earlier 25 percent tariffs. The Japanese side of negotiations led by Foreign Minister Toshimitsu Motegi said he was seeking to confirm if the auto tariffs would be left out. The lack of a provision on the exchange rate was also good news for Tokyo policymakers ahead of the BoJ’s Thursday policy meeting. With BoJ facing a dilemma over whether to dive deeper into the negative territory in interest rates, the bank seems to have found some relief from the trade negotiations that hopefully will help exports and the foreign exchange market. However, the US Fed’s Wednesday meeting in which a 25 basis point cut is expected should also be taken into account. If a deal that leaves out auto tariffs and the exchange rate are ratified, then the Yen will come to the levels BoJ wants. In today’s outlook, 108.30 that roughly corresponds with 78.6 percent Fibonacci retracement is the first resistance line. Further above we are watching 108.40 and later 108.60. In the case of a drawdown in the pair, 107.90 and later 107.50 will be followed.

The precious metal has been pressured by the strong dollar that gained on the spike at oil prices due to the Middle East tensions. Although gold itself initially rallied well above 1500, it soon relaxed as the dollar made gains and after US President Trump ruled out war with Iran in response to the weekend attacks on Saudi production plants. The price is currently holding above the 50 percent Fibonacci retracement level at 1493. If that line is broken, we will watch 1487 and later 1483 as support levels. For upward targets, 1500 and 1507 are to be watched. If the second one is breached, we will watch 1512 for resistance. 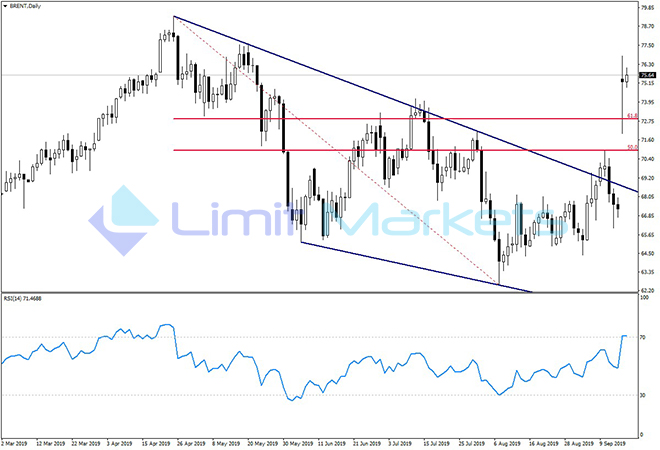 Oil prices remain on the edge after the weekend attacks on Saudi production facilities that halted half of the Kingdom’s output. Questions on how the Saudis and their ally the US would respond to the alleged culprit Iran, along with when the production would return to its normal levels of production are two main factors keeping prices up. The brent price has surged above the 20 percent upward open of the week. 76.20 and later 76.70 are the two most immediate targets in the current upwards-leaning move. Further above we will be watching 77.00. Although tensions stay high and move down will meet support at 75.30, a line of indecision for the past several sessions, and later 75.00. Still below, 74.60 will be crucial for the price before it attempts to reach the 61.8 Fibonacci retracements. 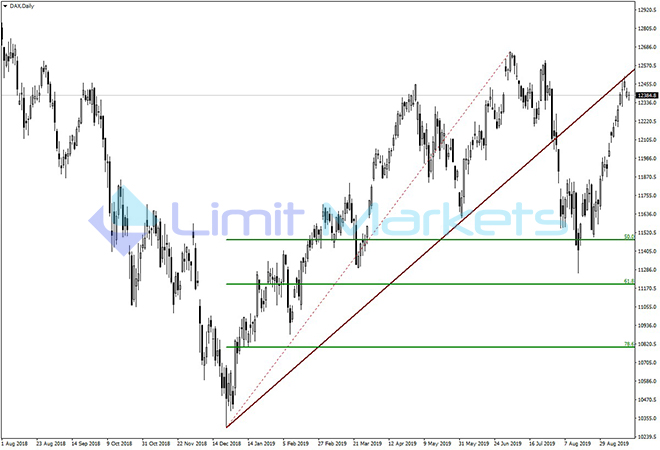 Investors in Germany are on hold before the interest rate decision by the US Federal Reserve. The Dax 30 futures on Tuesday are undecided in the first hours of the trading day. The Zew Economic Sentiment report for Germany and the larger Eurozone might provide some clues to the index before investors act. The Middle East tension and oil supply fears had pushed it down early at the weekly open, as such multiple factors continue to put pressure on the Dax. 12 430 remains an upward a target in the current outlook, depending on the findings of the Zew, we might see a surge for 12 450 to be followed by 12 500 ahead of the Fed decision. In the case of a fall, 12 350 and then 12 310 may come ahead. 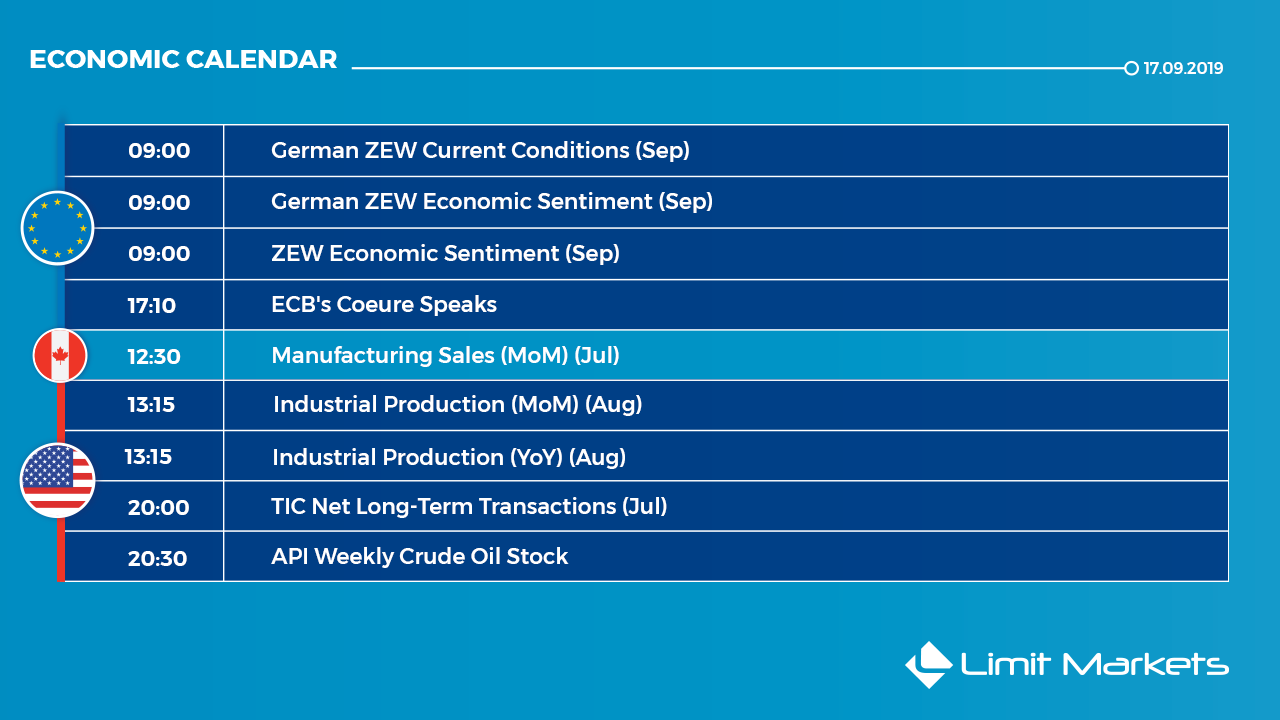