The US economy showed a neutral-to-slower growth compared to previous estimations but continued at solid pace in the second quarter of the year amid the Trump White House’s trade war with China and battles with other major economic blocs. The US Commerce Department on Thursday reported that the country’s gross domestic product, rose by 2% in the period from April to June. Consumer spending remained one of the brightest spots in the economy as it rose to a vigorous pace of 4.7% growth in Q2, the fastest since 2014.

President Donald Trump praised the economy as “doing GREAT, with tremendous upside potential!” But he went on to blame the Federal Reserve for downside effects and risks. “If the Fed would do what they should, we are a Rocket upward!” he tweeted.

The Trump administration was studying a proposal that would see taxes on American citizens lowered by the same amount it takes in from tariffs on Chinese goods as the trade war between the world’s two largest economies continue to put pressure on American producers and consumers. The idea was put forward by the Florida Republican Senator Rick Scott, the Washington Post reported on Thursday, adding that he had talked with White House officials, including Larry Kudlow. The proposal needs congressional approval as Washington has imposed fresh 5-percent extra tariffs on hundreds of billions of dollars-worth Chinese goods from September 1 and October 15.

Beijing and Washington gave signs on Thursday that they will resume trade negotiations in September, raising hopes for an eventual resolution to the tariff war they wage.
Florida is bracing for a hurricane on Friday that is threatening to hit the state over the Labor Day weekend. The hurricane named Dorian is gaining power as it gets closer to the land. Oil-producing region in the Gulf of Mexico west of Florida seems to out of harm’s way for now. 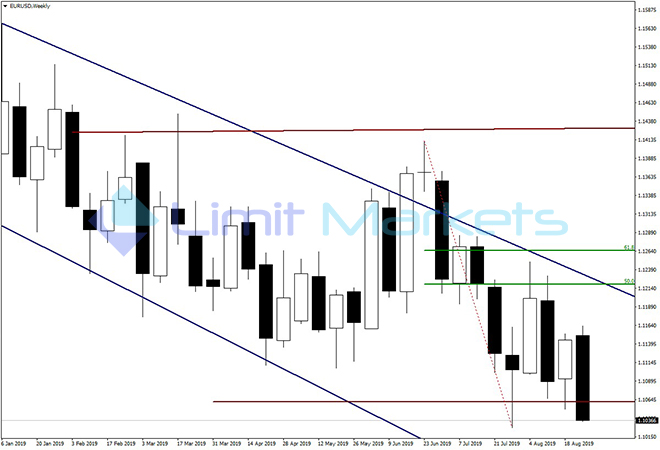 The common currency has been on a losing ticket for this week it appears as traders prepare for the last sessions. The pair price has decisively fallen below the 1.1065 that has been holding for several weeks now. A fifth day of losses in the euro was hastened by the positive US GDP and consumer spending data as the dollar keeps gaining, partially on hopes surrounding China-US talks next month. Italian President Sergio Mattarella’s mandate to Giuseppe Conte to form a government between the anti-establishment 5-Star movement and the center-left Democratic party (PD) has done little to no visible effect on pricing in the pair. As the price moves down, 1.1025 that was the recent 27-month low will come into focus. If broken then 1.1000 will be followed, a highly critical level for the euro’s value as its largest economy, Germany, faces prospects of a recession in the midst of disappointing data. In the event, we see a rebound, the 1.1065 line will act as resistance. 1.1100 will then be in the crosshairs in the continuation of the move. 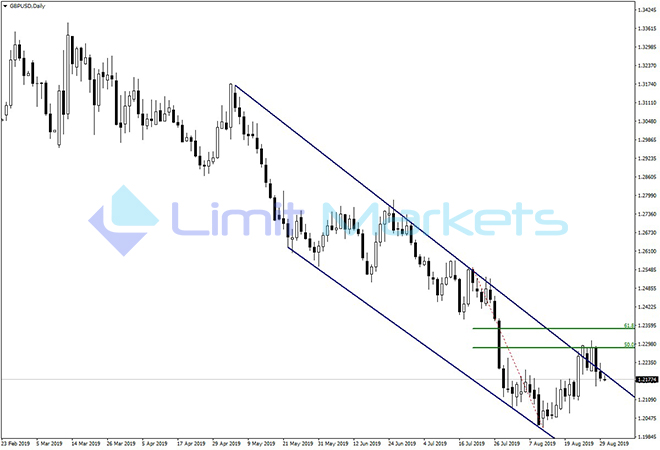 The heightened possibility of a no-deal Brexit in the aftermath of the Johnson government’s decision to suspend the parliament until a fortnight before the departure date from the EU continues to push the pound down. Positive US data also weighed on the weakened sterling. Foreign minister Dominic Raab defended on Friday the government’s latest move that much angered the opposition. He said the accusations that the suspension of parliament was a constitutional outrage were “nonsense” as he attends an informal EU foreign ministers summit in Helsinki. The pricing has in the past several sessions consistently failed to meaningfully breach the upper band of the long-time descending channel. If it doesn’t manage to break upwards, then we can expect a retreat to 1.2150, and later 1.2130. 1.2100 will be crucial as a third target. With no major data in sight, the pound’s moves will continue to be affected by political developments for the rest of the week’s remaining trading hours. In case the pair price manages to go and remain above the upper band, then we can see a surge for 1.2200 and later 1.2230. 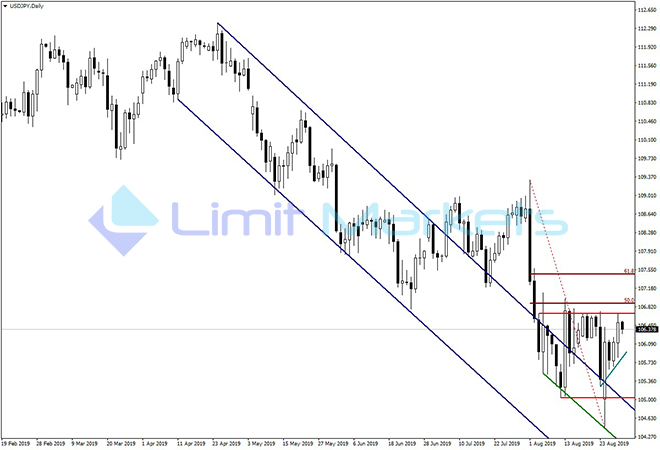 Japanese household spending in July is expected to have expanded by 1.1% from a year earlier, a Reuters poll of 16 economists showed on Friday. The figure that will be released on September 6, if it comes in line with the expectation will be down from 2.7% in June and 4.0% in May of this year. The dollar-yen pair, in the meantime, saw a fall from a near upper band of the straight channel but continued its weekly rise as trading hours in Asia come to an end. Yesterday’s US GDP and consumer spending data were in favor of the dollar. As the price progressively comes down in a 4h chart, it will first test 106.20 and later 106.00. In the event of a reversal from the current pricing near 106.40, we will a surge towards 106.70 that has been preventing the price from going upwards. If that line is broken, then 107.00 will enter within range.

A little bit of optimism from the US-China trade war front pushed the precious metal down in the past several sessions. As both sides expressed readiness for the previously-scheduled September negotiations, US President Donald Trump said some discussions were taking place on Thursday. China’s commerce ministry confirmed that the September round of talks was being discussed by the two capitals of Beijing and Washing but urged the latter to for cancel a tariff increase that is set to come into effect on Sunday. Despite the drawdown in price, the gold’s long-term trajectory appears to be upwards-moving. Still as the US and China explores solutions, a further decline in price should not be a surprise during the upcoming week and those succeeding it. As for the Friday trade, the current fall could test 1522 again. In the continuation of the move, keep an eye on 1515. If the pricing move up, then we will watch 1534 and then 1540 to be followed by 1548. 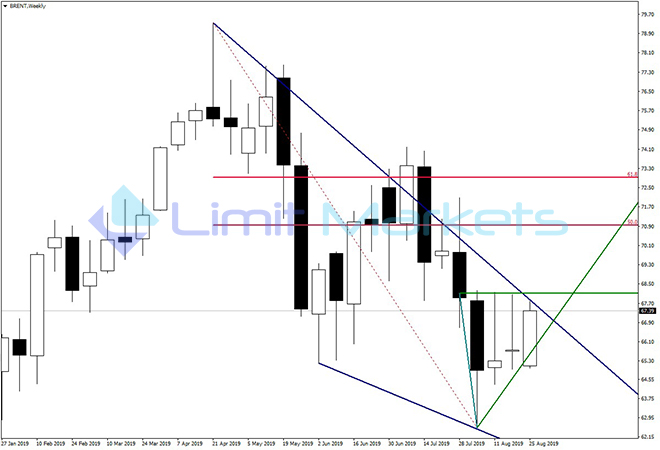 Oil prices on Friday are going for their steepest weekly gains since early last month as the Wednesday-released figure of a 10 million barrels-drop in the US crude inventories and a threatening hurricane set to hit Florida uplift the appeal for the commodity. The weekend-expected landfall of the hurricane Dorian frightens the industry that offshore US crude production facilities west of Florida in the Gulf of Mexico may have to be shuttered down if the winds change course westward. The positive outlook in oil came despite small niceties between the US and China regarding their September-scheduled trade talks. The brent price remains near the upper band of the falling formation and that of the closing triangle. Having nestled well above 67.00 at around 67.40, the brent may jump from there to 67.70 that is at the upper band of the falling blue channel. If breached then we will see a rise to 68.00. Dorian’s course on the weekend will determine if the price climbs up for 68.50. In the event of a drawdown, we will see the price falling to 67.00. Still below, we will see 66.80 and later 66.30. 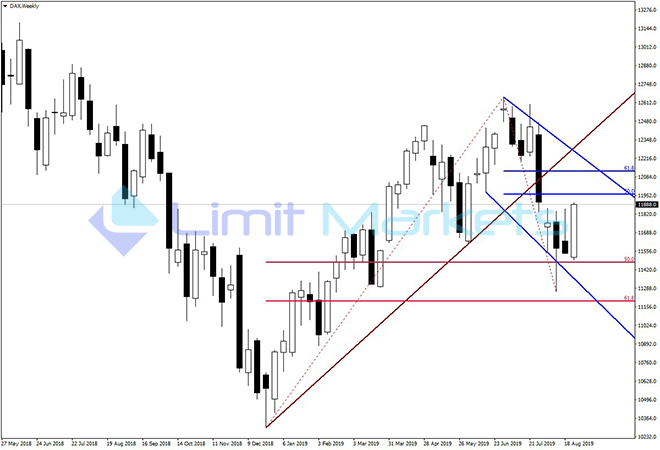 Bulls in the German index were in full-throttle mode after the US and Chinese sides signaled optimism regarding their next month round of trade talks in Washington, despite the latest decision by President Donald Trump to impose 5 percent extra tariffs on Chinese goods from Sunday on. Having made over 160 points during Thursday trading, the Dax 30 has now set eyes on the 12 000 thresholds last seen earlier this month. But before that, we will see if it breaks 11 960 that corresponds with the 50 percent Fibonacci retracement level on the more recently formed downward move in blue. Once that is broken then we can more confidently talk about 12 000. In the event of a pullback or profit-induced corrective move, we will see the price drawing to 11 830 before heading to 11 780.