US President Donald Trump’s economic adviser Larry Kudlow late Thursday that Washington and Beijing were coming to the final stages in negotiations over the so-called Phase-1 of a trade agreement as the two sides remained in close contact.

Kudlow told media in DC that that a deal was within reach but “not done yet,” adding that top White House trade advisers met on Thursday evening to discuss how the talks with China proceed.

“We are coming down to the short strokes. We are in communication with them every single day right now,” Kudlow said.

The People’s Bank of China on Friday released 200 billion yuan (nearly 28.60 billion US dollar) to the markets via its medium-term lending facility on Friday, for the second time this month. The central bank of the world’s second-largest economy stuck in a trade war with the US kept its lending rates on hold.

The Organization of the Petroleum Exporting Countries (OPEC) said in a Thursday-published report that the cartel expected demand for oil to go down next year. OPEC showed that demand for its crude output would fall to an average of 29.58 million barrels per day in 2020, which is 1.12 million bpd less than this year. OPEC and its primary ally Russia collectively known as renewed its supply cut policy into March 2020.

The US Energy Information Administration reported on Thursday that crude oil inventories in the country increased by 2.2 million barrels last week, much exceeding the forecasts around 1.650 million-barrel rise. American crude production, too, hiked by 200,000 bpd to a weekly record of 12.8 million bpd, according to the EIA report. 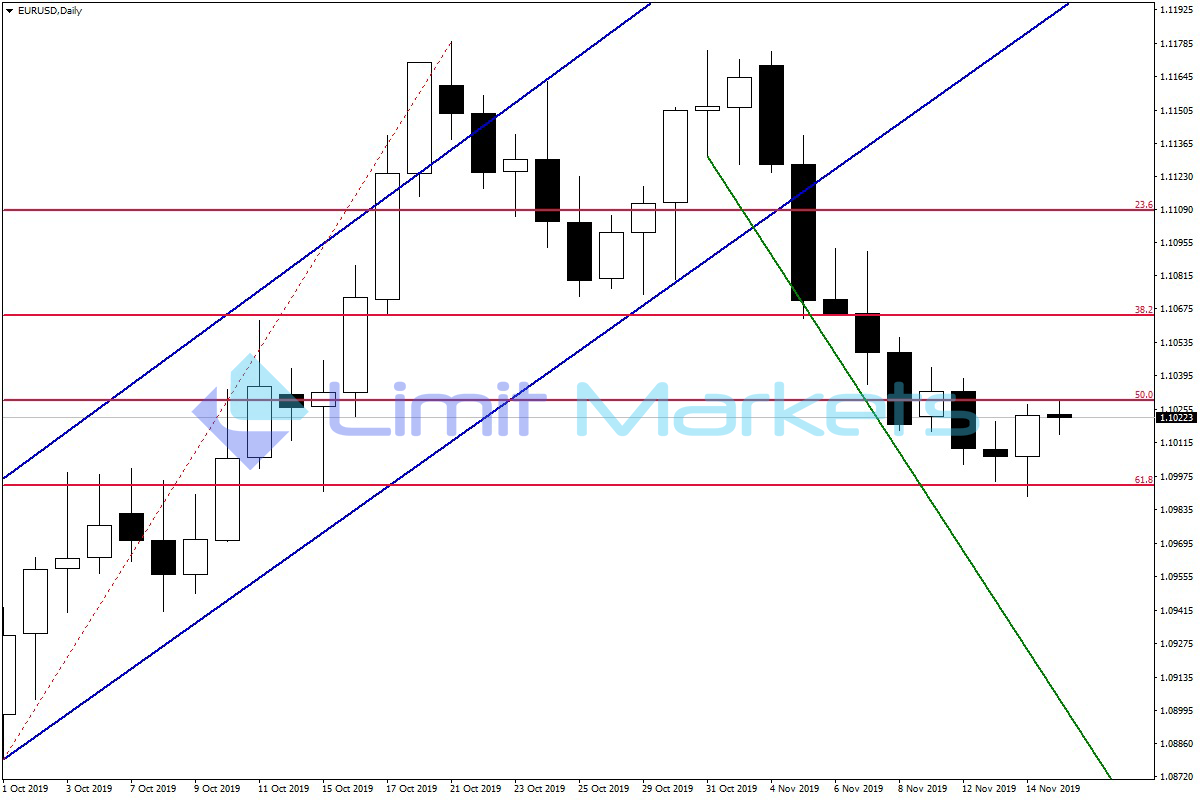 As the Eurozone’s powerhouse Germany avoided entering into a recession in the 3rd quarter with a GDP growth of 0.1 percent, the euro made its best move yet since last week. The pricing retraced after hitting the 50 percent Fibonacci retracement. Since then the gains on the euro’s part remain preserved, although a correction to yesterday’s rise could 1.1010 and then 1.1000 can be seen during the day. Still below, 1.0990 will be followed. Another push for the pair, although less likely, might mean a climb to 1.1040 and then 1.1050. 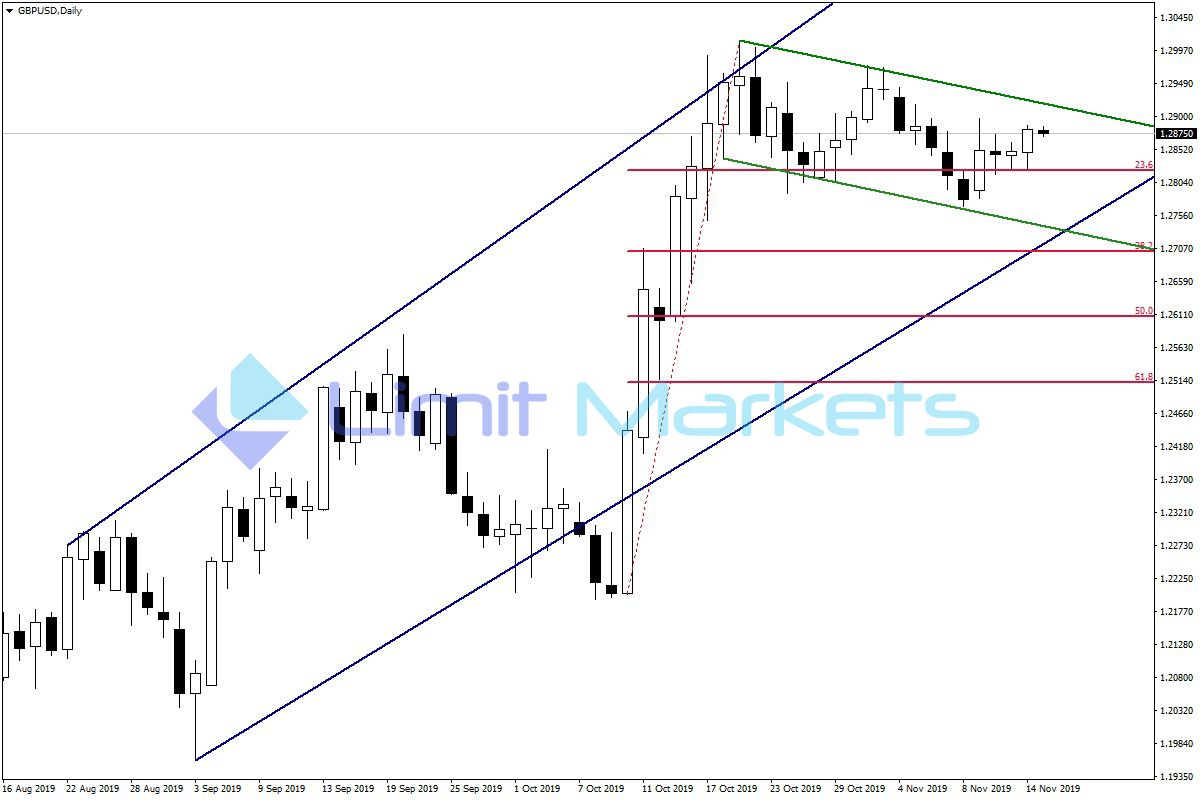 With British parties in full preparations and campaigns for the December 12 snap elections, the pound entered into a straight channel with a tendency to going up and down inside. Pressured by the US dollar might the pair price might be pulled down to 1.2850 and 1.2821, a fairly firm support at the 23.6 Fibonacci retracement. Given the current political situation, it is likely to price-meandering up and down will go on. In the event we see a rise, 1.2900 and then 1.2920 near the upper band can be watched. 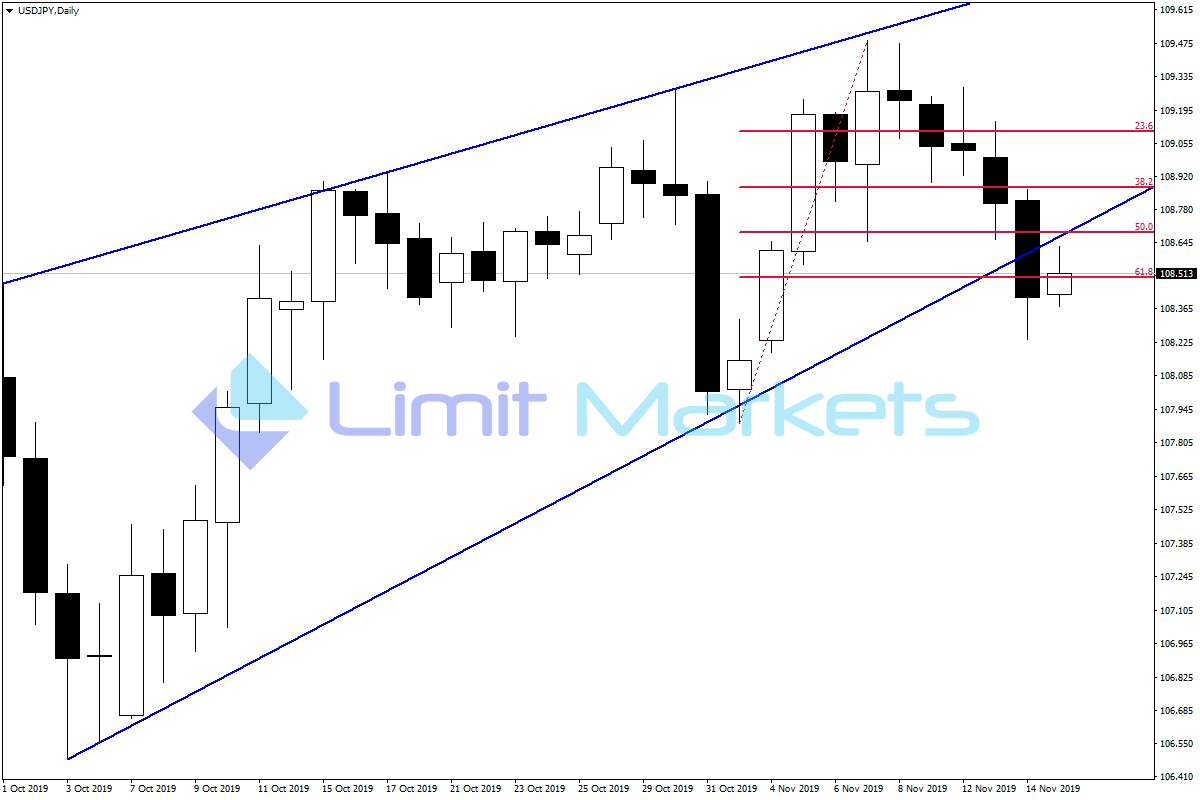 The Japanese yen erased gains in the closing sessions of the Asia-Pacific trade in the wake of a drop in risk perception thanks to remarks by Trump’s top economic advisor Kudlow who renewed, albeit with less enthusiasm, hopes for a Sino-US Phase-1 trade deal. The pair price is now in the process of testing 108.50 at the 61.8 percent Fibonacci retracement. If it is decisively broken, 108.30 and then 108.00 should be watched. In the event the pair price sees an increase we might then watch 108.60 and later 108.70 lines. 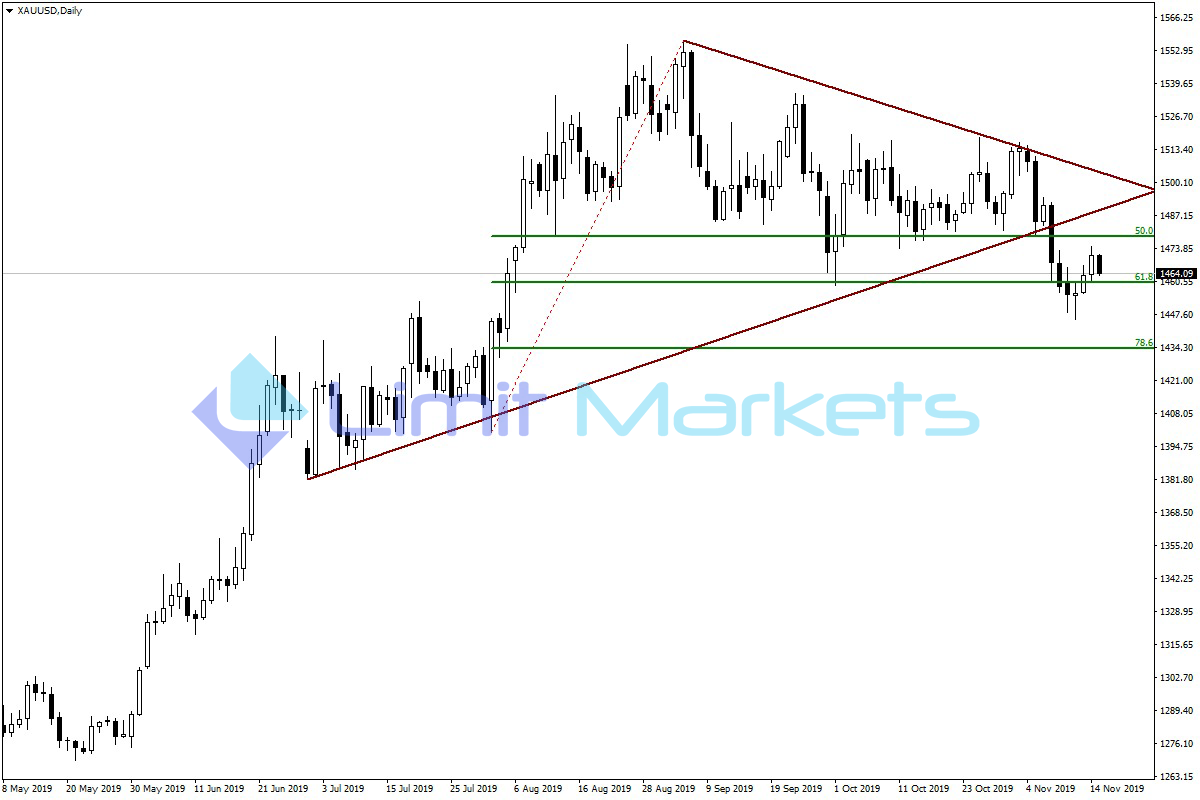 Pricing in gold and other precious metals eased on Friday largely due to yet another positive sign, given by Trump’s economic advisor Kudlow, that the US and China could be coming down to finalizing a trade deal. However, markets have now started to take such remarks with a pinch of salt, trading cautiously due to previous statements that later were denied or repudiated. 1460 perfectly at the 61.8 Fibonacci retracement. If the caution is let go, then 1455 and 1450 can be targeted. For a reversal in price, and depending on developments as well as a lowering in markets’ risk perception, the price could reach back up to 1470. From there a jump to 1474 and then 1478 can be seen. 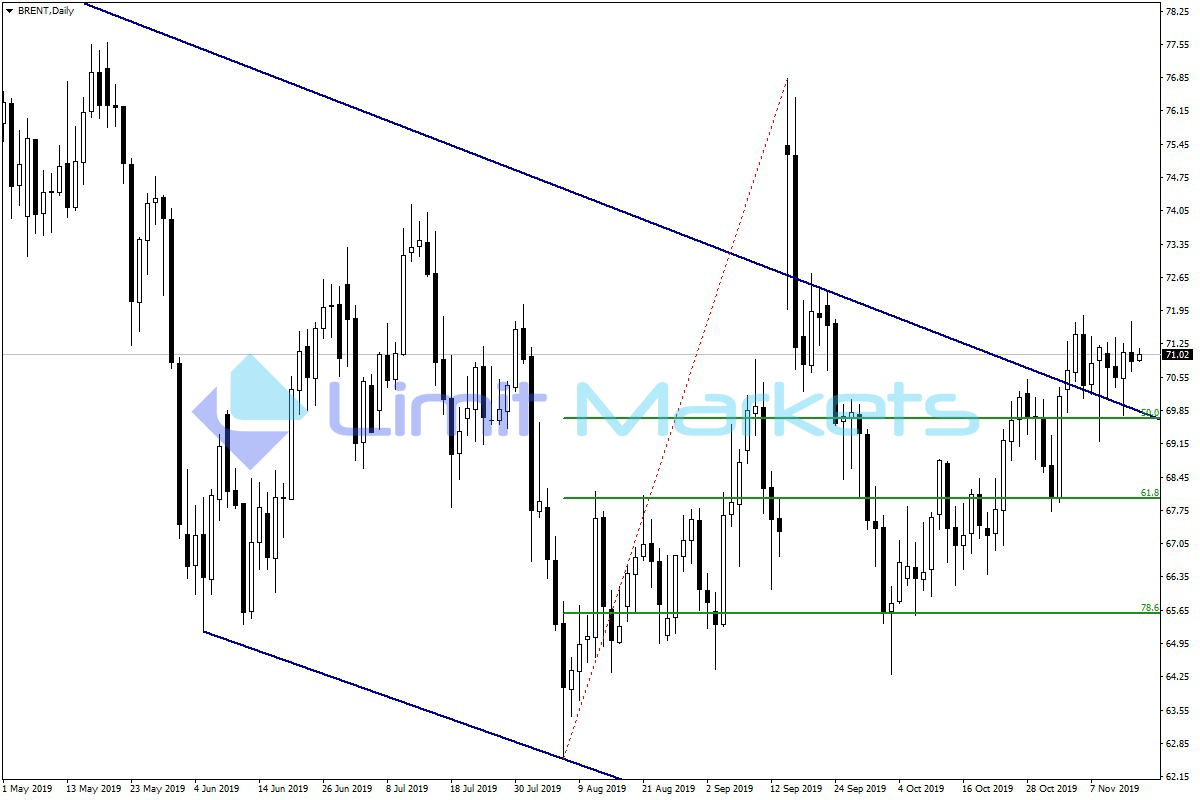 Oil prices slightly jumped on Friday over top economic advisor to US President Trump, Kudlow’s remarks that a deal with China was close. But an earlier fall created by OPEC’s downgrading its demand forecasts and a more-than-expected increase in US crude inventories pressured market pricing. As the brent price makes its way upwards on the Sino-US deal hopes, investors should keep an eye on the first resistance at 71.50. The positive mood, if continued, can then reach 71.70 and then 72.00 levels. In the event of a muted response, 70.70 and then 70.40 levels must be followed. The price at 70.00 and near the upper band of the falling channel should act as a solid support. 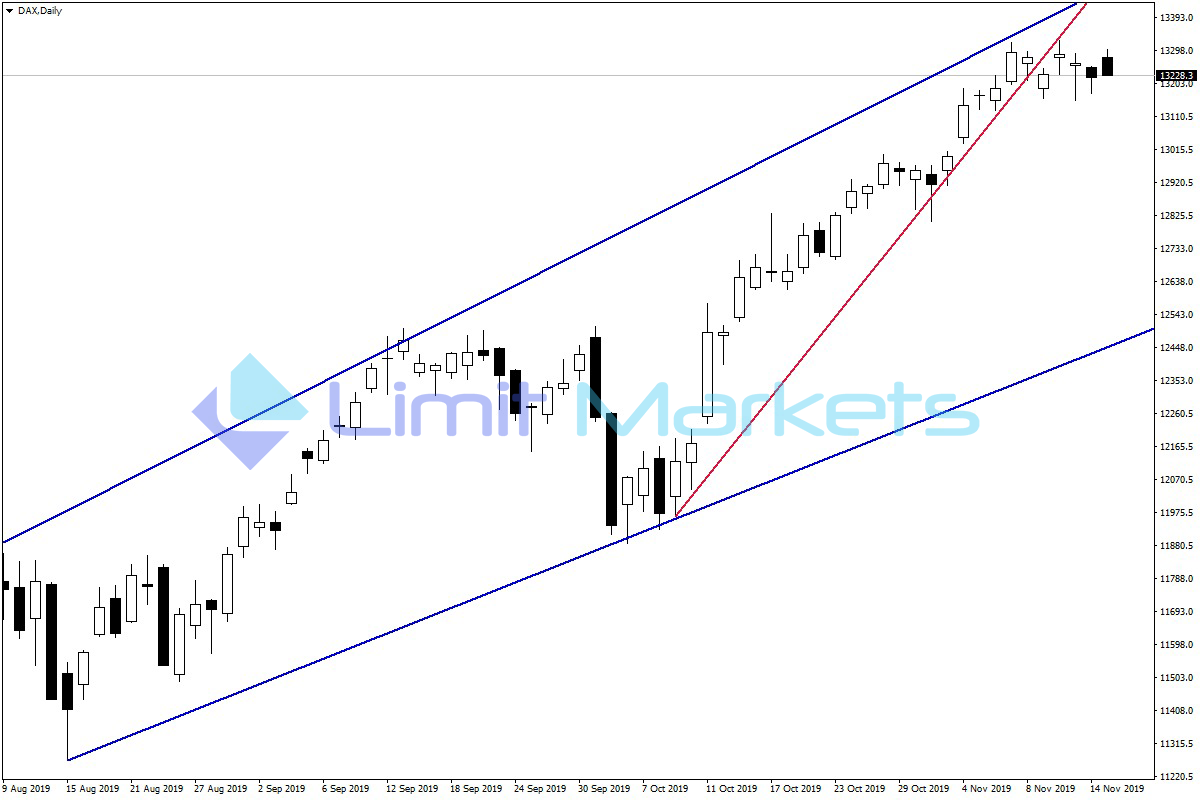 Kudlow’s confidence overnight that the US and China could reach a trade deal led to an upwards gap on Friday opening of the German Dax index. But the jump-up could not maintain its briefly-held position over 13 300. The Dax is now, similar to other assets that experienced short-lived and cautious gains, making a fall to 13 220. 13 200 must provide some firm support, to be followed by 13 180 if the drop accelerated. For another climb, 13 250 and then 13 270 should be followed.