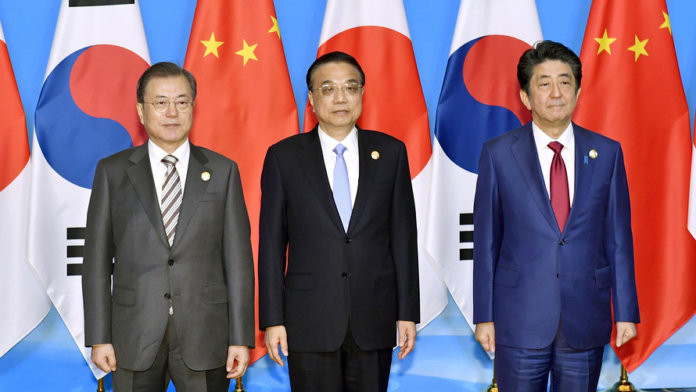 “They are just going to steal wholesale state secrets, whether they are the UK’s nuclear secrets or secrets from MI6 or MI5. It is somewhat shocking to us that folks in the UK would look at Huawei as some sort of a commercial decision. 5G is a national security decision,” O’Brien said in an interview published Tuesday.

Washington has been pressing its allies to keep away from Huawei 5G networks over fears of spying by the company on behalf of the Chinese Communist Party.

After meeting with Chinese and Japanese leaders on Tuesday, South Korean President Moon Jae-in announced that the three countries will work together to improve the dialogue between the United States and North Korea.

“We shared the view that peace in the Korean Peninsula is in the common interest of the three countries, and we have decided to work together to improve the North Korean-US dialogue,” Moon said.

The fears that North Korea could launch a ballistic missile has risen again, following Kim Jong-un’s threats of a ’Christmas gift’ to the US.

Tuesday-released minutes from the Bank of Japan’s October policy meeting showed that a few board members advocate that BoJ must work with the government in confronting another potential economic downturn.

“The BOJ should prepare for the next economic downturn as among risk scenarios. In doing so, it’s important not only to take monetary policy action but enhance cooperation with the government” the minutes said, quoting some members.

At the October 30–31 rate meeting, the BOJ kept its policy steady and interest rates unchanged but issued its strongest signal that it may slash rates in the near future.

In remarks carried by Reuters from a forum in Beijing, Lu stated that authorities will further integrate financial technology and the foreign exchange market.

“(The government) will push forward a prospective study on foreign exchange reforms to deal with cryptocurrency and explore the construction of the foreign exchange regulation and technology system under the new situation,” he said.