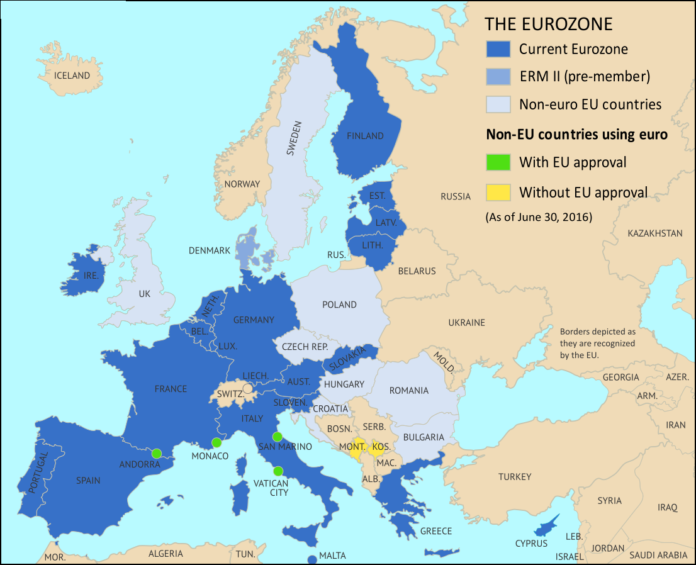 The Economic and Monetary Union (EMU) was set up in 1992 when twelve countries signed the Maastricht Treaty (The Treaty on European Union). It was one of the main steps in further integration of EU countries aiming to provide joint coordination of economic and fiscal policies, a common monetary policy, and a common currency, the euro. Today, 28 countries are members of the Union, whereas 19 adopted the euro comprising a eurozone.

The European Central Bank (ECB) was established in Frankfurt in 1998 in order to coordinate the new common currency. Euro was officially introduced in January 1999 in non-cash payments and later in 2002 physical notes and coins were launched. It was by far the largest currency changeover.

In order to join eurozone Member States need to comply with ‘convergence criteria’ (or ‘Maastricht criteria’) that were agreed by the EU Member States in 1991. Criteria are set in order to achieve price stability, sound and sustainable public finances, exchange rate stability and the level of long-term interest rates below some thresholds. Moreover, national laws must comply with the policies of the ECB.

Denmark and the United Kingdom have ‘opt-outs’ from the Treaty, however, can join in the future whether their governments decide to. Sweden joined EU in 1995 however refused to adopt euro in a referendum. The remaining non-euro area Member States are among those which joined the Union in 2004, 2007 and 2013. They did not meet the requirements for entry to the euro area. Andorra, Monaco, San Marino and the Vatican City have also adopted the euro by signing the formal agreements with the EU and may issue their own euro coins within certain limits. However, as they are not members of the EU, they are not part of the eurozone. Montenegro and Kosovo officially adopted the euro without an agreement and without issuing rights.