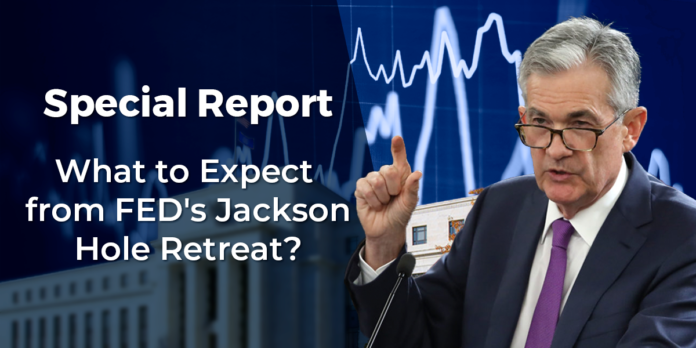 US Federal Reserve is kicking off its annual two-day conference in Jackson Hole, Wyoming this week, starting Thursday.

When data conflicts with expectations

Fed’s messaging at this time of increased uncertainty surrounding the health of global economies will be crucial for investors seeking a direction in their navigation through the ever-more volatile financial waters.

Questions whether the Fed will move ahead with slashing interest rates during its next month Federal Open Market Committee (FOMC) meeting is dominating the agenda ahead of the Jackson Hole Economic Policy Symposium held by Kansas City Fed. Recent positive data, particularly the July consumer figures and retail sales that came out better than expected will be providing Chairman Jerome Powell with enough ammunition to proclaim that the economy is strong and faring well so far despite external threats.

External threats, and most important of them the Trump administration’s ongoing trade war with China, were, along with the fears of recession, among the reasons the Fed went for a 25-basis-point rate cut in July. The minutes from that meeting whose aftermath turned out to go in the opposite of the intended effect are due to be released on Wednesday. The minutes, if show less consensus for the cut, could lead to more confusion regarding future policy. The July cut, long and persistently called for by the White House, was essentially less about the cut but rather a response to the market worries.

The nominal truce in the Sino-US trade war is still in place despite Trump’s decision to levy further ten percent tariffs on the remaining 300 billion dollars-worth Chinese goods entering America in September. He later delayed some of those tariffs to December 15 after meeting Tim Cook, the Apple CEO.

Considering the Fed has consistently stated that it always takes the most recent data into account when it comes to decision-making, the rather high expectations for another rate cut of 25 basis points in September may not be confirmed through signalling by Powell when he speaks on Thursday and Friday. Powell’s reluctance for more cuts as hoped for by the markets has the potential to frighten stock and bond markets. And still, Powell will still have a hard time if he does not signal more rate cuts — at a time President Trump calls for even a 100 basis-points cut for the rest of the year.

Another factory going contrary to positive data is the mid-August inversion in the US Treasury bond yields in a manner unseen since before the last decade’s Great Recession. However, that curve too has now ended.

The Fed is watching the market to determine its policy options and strategy. As such speeches and statements will definitely take the recent volatility and flight to safe-haven assets into consideration. But again, the Fed will not want to exacerbate the worries as it awaits to see the actual impact of the tit-for-tat tariffs in the trade war in hard, verifiable data.

Amid all the fog and confusion, the one thing clear is the fact that Powell will be opening up much space for the Fed to move along and pave its course in line with the upcoming data in the weeks ahead and the need to counter looming dangers.