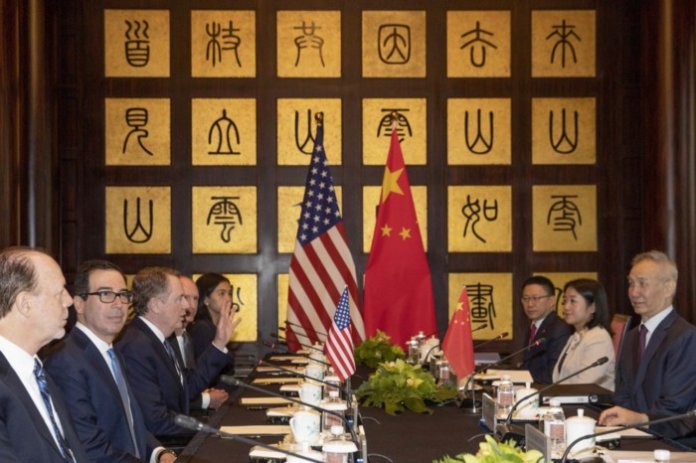 Markets are awaiting Wednesday with a historic FOMC meeting underway at the US Federal Reserve.

The Fed, under pressure from external factors such as the trade wars and internal ones regarding the slow pace of inflation, is expected to cut interest rates by at least 25 basis points for the first time in a decade since the Great Recession. The central bank’s chairman Jerome Powell will be speaking at a press conference after the decision.

All talk, no walk in Shanghai

The first face-to-face Sino-US negotiations of the second ceasefire in the trade war went on in Shanghai, with all talk and no breakthrough in sight. The US side led by the USTR Robert Lighthizer and Treasury Secretary Steven Mnuchin is expected to go back home with no substantial concession from the Chinese as they pressured Beijing to buy more American agricultural products and ease the regulations imposed on foreign companies operating in China.

US President Donald Trump accused China of waiting until after 2020 elections to negotiate a trade deal with a different president. “If & when I win, the deal that they get will be much tougher than what we are negotiating now or no deal at all,” Trump said.

UK Prime Minister Boris Johnson is visiting Northern Ireland on Wednesday in a bid to sell the people and politicians there his plan of Brexit that involves the possibility of leaving the EU without a deal if Brussels does not take a step back from the contentious Irish backstop clause.

Johnson’s trip to NI comes at a time when calls for Irish unification rise on both sides of the border. Jeffrey Donaldson, a senior lawmaker in NI’s pro-British Democratic Unionist Party (DUP) said chances of a no-deal Brexit were significant and that the EU had to drop the so-called backstop for the deal to pass through the Commons.

Germans not on board with US against Iran

Germany is “very skeptical” about a US request from European nations to partake in a military task force to counter Iran in the Strait of Hormuz, the country’s Vice-Chancellor and Finance Minister Olaf Scholz told ZDF television.