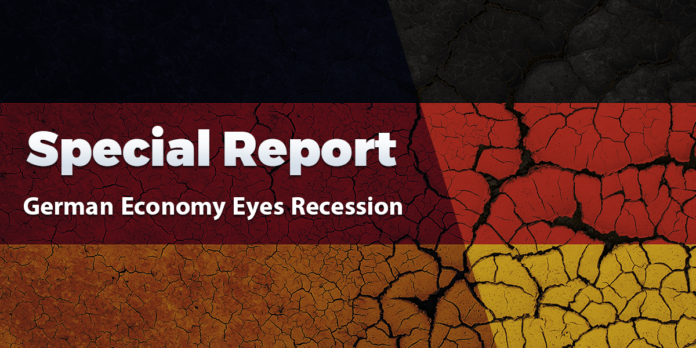 A looming recession is casting a shadow over Europe’s powerhouse the German economy.

The country’s export-reliant sectors are increasingly feeling the effects of global trade wars, mainly between China and the US, slowdown elsewhere and the rising threat of a no-deal Brexit.

Recent data, particularly in manufacturing, has shown a contraction in recent months as demand from abroad took a slump. The IHS Markit’s Purchasing Managers’ Index (PMI) for manufacturing saw a slight increase to 43.5 but remained below the 50.0 mark.

“Germany’s manufacturing PMI held close to a seven-year low in August as new orders continued to fall sharply and the production of goods was scaled back once again. Furthermore, a marked drop in firms’ output expectations to a record low suggests that things could even get worse before they get better,” the report released in early September read.

A more illuminating figure came in mid-August when the Federal Statistical Office of Germany (Destatis) announced that the country’s gross domestic product in the second quarter of the year had shrunk as the 0.1% while the same quarter a year earlier in real terms stood at 0.0%. 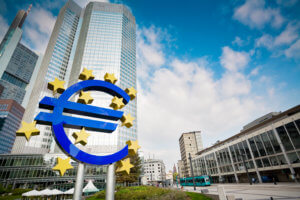 “Domestic demand, according to provisional calculations” added to the GDP, the Destatis noted. “Compared with the first quarter, household final consumption expenditure increased, together with government final consumption expenditure,” it said, confirming that the downside of the figure was triggered by the external factors that hit the exports to the British and Chinese markets.

Exports constitute nearly between 40 to 50 percent of the gross domestic product in Germany. So as other economies deal with their own issues, their demand for German goods falls — as is the case with the UK’s Brexit crisis and China’s trade war with the US.

According to another Destatis report in August, German exports fell by 8% from the previous year, the most since mid-2016, yet another factor contributing to the slowdown in Eurozone’s largest and most stringent economy. And in the automobile sector, too, the fall stemmed from lower demand in China and Britain for German cars. In the second quarter for example, all exports to to the UK dropped 21 percent, the biggest fall since the 2008 Great Recession.

The very real threats of a no-deal Brexit and even longer tariff war between Washington and Beijing only exacerbate German carmakers’ woes. The two factors will be the main reasons cited behind Germany’s recession when and if it is confirmed. 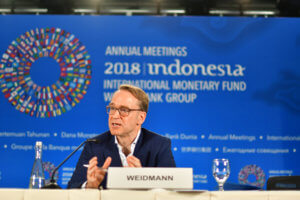 Retail sales in the country meanwhile were also badly battered in July, showing the biggest fall in the figure since late last year. The seasonally adjusted sales in real terms dropped by 2.2 per cent in July compared with the previous month. That was a full percentage point larger than what analysts were expecting.

Adding to all the disheartening data, was a warning by Germany’s central bank in late August that clearly spelled out the word “recession” for the markets and investors to hear.

The Bundesbank said that the German economy “is probably set to remain lackluster in the third quarter of 2019,” predicting that GDP “could continue to fall slightly.”

The bank noted that its bleak outlook for GDP was “due mainly to the continued downturn in industry,” stating that data showed a further contraction in industrial production which fell over 5% compared to last year.

Bundesbank’s ambitious boss Jens Weidmann, on the other hand, recently said he saw “no reason to panic.”

“Forecast uncertainty is very high. And of course, there are major items on the economic policy agenda that need to be addressed. But it would be wrong for us to act for action’s sake or to succumb to pessimism,” Weidmann said in a recent interview with the Frankfurter Allgemeinen Sonntagszeitung.

As for the European Central Bank that will be convening on September 12 for a rate-setting monetary policy meeting, various options remain open, including a stimulus package that has been hinted before, a rate cut that would help the euro sink further against the US dollar and provide the Eurozone (and Germany, obviously) with more advantage in the exports business and asset-buying.