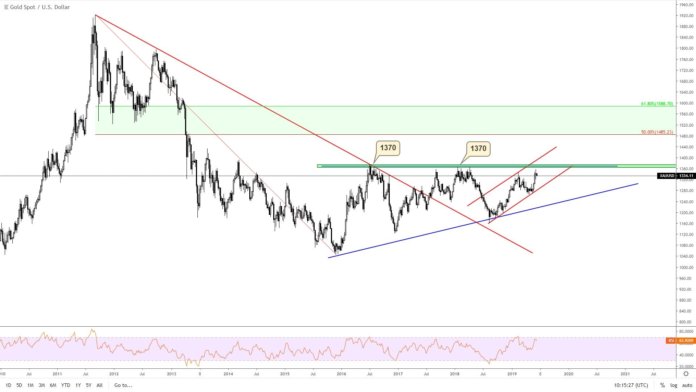 A protracted trade war between the world’s two largest economies, China and the US, continues to frighten markets and investors around the globe. As such it has added much to the appeal of the precious metal as the world’s favorite safe-haven investment.

The signs were here as 2018 was ending with no Sino-US deal in sight and the prices managed to reach back US$1,300 shortly after the new year began. A new push towards the second half of the year almost hit US$1,350. That was also thanks to US President Donald Trump continued trade war with China.

The two countries do not appear to be making any new efforts to relaunch the failed negotiations. While Trump accuses China of awaiting a new President in Washington for a deal, the Chinese implement stimulus programs and other policy tools to reinvigorate its slowing economy that now faces serious tariffs in their hundreds of billions from the US.

Considering Trump might be right about his suspicions that Beijing is, in fact, looking forward to negotiate a deal with another President in 2020 — with the Democratic presidential hopefuls having already launched their campaigns, the solution to the trade war may not be here anytime soon. As the adverse effects of this tit-for-tat conflict spread around the globe, gold will definitely benefit from the prolongation of the crisis, bidding its sanctuary role for investment.

China’s secret wait and see approach, despite medium-term hazards, may help push the bullion well above $1,350 for the remainder of the year.

Among other risk factors that may contribute to the precious metal’s rise are slowing economies, the Eurozone’s struggles with growth and structural reforms, the Brexit fallout, simmering Iran-US tensions, the North Korean situation and yet another potential inversion in the US Treasury bond yields.

The latest tensions between Iran and the US in the Gulf of Oman and Persian Gulf is another factor contributing to the rise of gold as fears of a potential military confrontation spread. Attacks on oil vessels in the region that is central to the security of global energy routes are adding to the concerns, as the US and its Arab allies blame the Tehran regime while the former accuses the latter. Trump has said neither side is ready for a deal, wording that suggests tensions are here to stay for a long time.

The Fed and rates

Markets are highly speculating at least one Fed rate cut by the end of 2019. According to CME FedWatch tool, the market is almost certain of a cut, pricing the chances at 98.1%. The next meeting and interest rate decision is scheduled for June 18–19, just before a G-20 summit in Japan where Trump may or may not hold a meeting with his Chinese counterpart President Xi Jinping.

However, it is worth mentioning that markets are not always successful in predicting Fed decisions regarding its benchmark rate. In the last Fed meeting on June 4, Chair Jerome Powell said the central bank will respond and act appropriately to support economic growth. However, gloomy economic data induced investors to believe the appropriate act would be cutting the rates.

It is also widely believed that there is a strong negative correlation between Fed funds rates and the price of gold. Lower rates affect exchange rates making Dollar less attractive and lowering its value against its peers. Hence, a lower exchange rate means a cheaper Dollar for foreign investors. However, there is no proven correlation between the historical price of gold and interest rates. What is evident is that stock markets are losing in times of relaxing monetary policy, as the risk appetite deteriorates and alternative investments become more attractive, on top of which is the non-yielding gold.

Gold has proved itself as a safe haven in times of economic turmoil. It also appeared to be sensitive to Fed policy. Thus we can expect a short to medium-term impact of the rate decision. US inflation rate is holding steady below the 2% target. However, record low unemployment rate may still indicate that the economy is more stagnating than falling. A recession is not confirmed and global trade relationship will be the most determinant of the direction of main macro indicators with Fed monetary stance following. Demand for gold will respond accordingly.

Faced with the fact that the Fed is set to halt its normalization process, markets in recent times have witnessed a decline in the value of the dollar in global markets. More remarks by the Fed officials regarding near future cuts in the federal funds support the bullish sentiment for the precious metal.