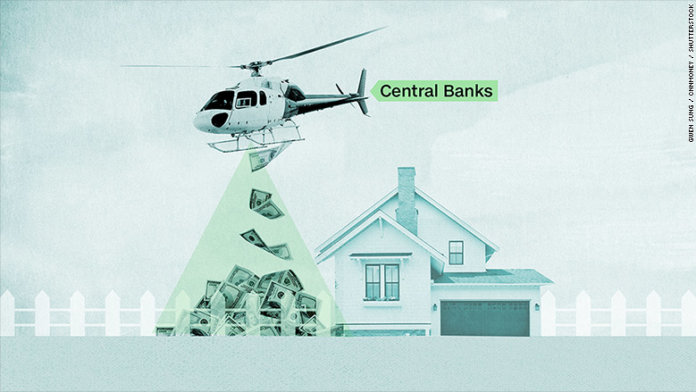 Helicopter money is the phrase crafted by Milton Friedman in 1969 trying to explain the consequences of changes in base money. It is a theoretical unconventional monetary policy to be used in combating with deflation.

“Let us suppose now that one day a helicopter flies over this community and drops an additional $1,000 in bills from the sky, which is, of course, hastily collected by members of the community. Let us suppose further that everyone is convinced that this is a unique event which will never be repeated.”

Milton Friedman used is just as an experiment, however, the idea revoked as some central banks left without solutions how to stimulate the economy. In 2002 Fed Chairman Ben Bernanke referred to it by saying: “A money-financed tax cut is essentially equivalent to Milton Friedman’s ‘helicopter drop’ of money,” earning a nickname “Helicopter Ben.”

In the situation where QE does not produce an effect, the helicopter money could always be used do directly inject the money into an economy and thus stimulate prices to rise. However, even that kind of policy is not a “free lunch.”

The main difference between QE and helicopter money is QE are policies of raising money supply through large-scale purchases of financial assets. The Fed, for example, buys Treasury securities. QE assumes payments to financial institutions and not directly to the public. By contrast, helicopter money means making payments to the public or to finance specific projects.

There have been examples of helicopter money, such as in the Weimar Republic, Hungary and Zimbabwe, which all led to hyperinflation. For example, it is estimated Zimbabwe’s inflation peaked at 179.6 billion percent in mid-November 2008. In 1945 decision-makers in Soviet-conquered Hungary started printing the new currency, peng to stimulate growth after the war. However, along with the political matters of the time, the monetary stimulus triggered one of the most extreme hyperinflations. Hungarian currency lost half of the value day by day. Florint replaced it eventually in 1946 and it was worth 400,000 quadrillion peng (29 zeros!).

Many policies and laws are written in order to prevent this kind of practices. Thus, the independence of the central banks is very important in preventing government financing. Bank of Japan has a long history in combating slow economic growth and many speculated that will opt for some kind of helicopter money. Instead, it maintains an ultra-loose monetary policy with periods of negative interest rates and large purchases of bonds.