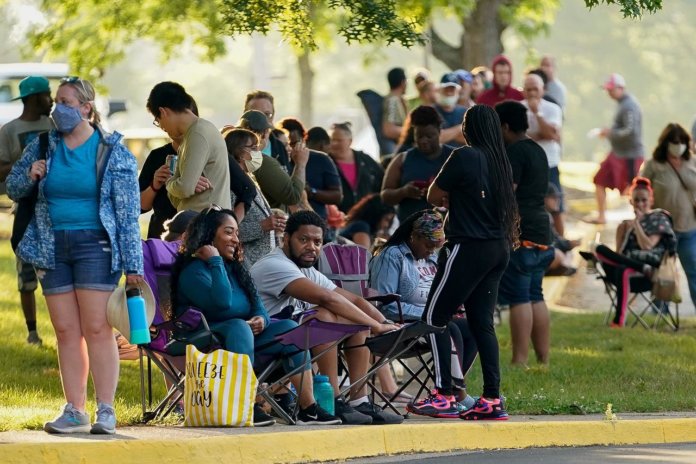 The world’s largest economy, one of the hardest-hit countries by the coronavirus pandemic, monthly non-farm payroll figure is set to be released at 12:30 GMT, a day earlier than usual due to the Independence Day holiday tomorrow.

The closely monitored monthly employment report by the US Department of Labor will contribute to a data flow showing a sharp recovery in manufacturing activity and consumer spending.

However, California, Florida, Texas, and Arizona’s confrontation with a new wave of the virus in the last two weeks will cause a huge increase in the weekly unemployment benefits claims to be announced at the same time.

Tens of American states and giant companies such as Apple and McDonald’s have once again put their economies and operations on hold on a local basis.

Economists participating in a Reuters survey expect US employment to increase by 3 million in June. If this happens, it will be the highest figure since the federal government began keeping records in 1939. In May, the economy created 2.5m new jobs.

Despite the two-month dazzling gains, employment is still expected to remain about 16.6 million below the pre-pandemic level. The unemployment rate is estimated to have dropped from 13.3% in May to 12.3%.

The US House of Representatives on Wednesday adopted new sanctions against Chinese officials and banks that did business with them over the Chinese Communist Party regime’s implementation of a new national security law on Hong Kong, the former British colony, and one of Asia’s largest financial centers.

The US Senate passed a similar law last week. However, according to congress rules, the House of Representatives law should be voted in the Senate too before being sent to President Donald Trump for approval or veto. Although both Republican and Democratic lawmakers favor more sanctions against the CCP, Trump might be inclined to impose due to the Phase-1 trade agreement between the two countries and the upcoming presidential elections in November.

In other news, British Foreign Secretary Dominic Raab condemned HSBC and other banks that have backed the new CCP law in Hong Kong.

Senior British and US politicians criticized banks such as HSBC and Standard Chartered for their support for the new law.

“Otherwise China will resolutely and forcefully resist,” he said.

The Japanese capital of Tokyo reported 107 new coronavirus infections on Thursday, the highest daily increase in the past two months, but Japan’s cabinet secretary said there was no need to impose emergency lockdown measures again.

The number of daily cases in Tokyo last exceeded 100 on May 2. Tokyo Governor Yuriko Koike said on Thursday that about 70% of new infections were with those in their 20s and 30s.

“I want all Tokyo residents and everyone in businesses to cooperate to prevent this,” said Koike.

Cabinet Secretary-General Yoshihide Suga told reporters that he does not think there is a need for a new lockdown.

The Japanese yen fluctuated between 107.33 and 107.55 levels in the European session against the US dollar, which is in a downward trend in recent weeks.