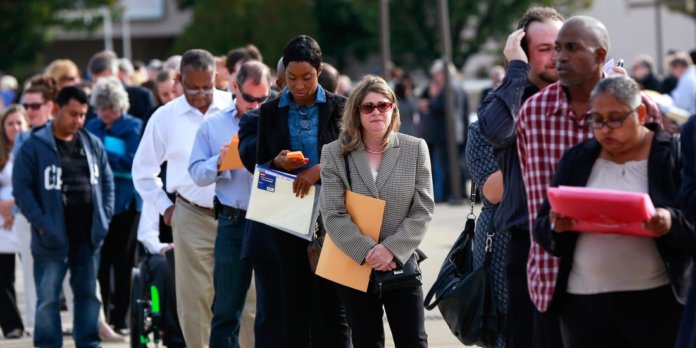 As the coronavirus pandemic rebounds in many states in the US, unemployment applications in the world’s largest economy exceeded expectations last week.

The unemployment claims reported by the Labor Department on Thursday totaled 1 million 480 thousand.

Economists who participated in a survey by Dow Jones were expecting 1 million 350 thousand applications.

While the figures remained higher than expectations for a second week straight, the total of those who received unemployment benefits continued to decline. Total recipients or ongoing filings fell by 767,000 to 19.52 million.

However, applications remained well above 1 million for the straight 14th week.

According to the latest estimate published by the Commerce Department, the rate of contraction in the US remained at 5% in the first quarter in line with the expectations.

The data for the first quarter are downward with the effect of the coronavirus pandemic. US Federal Reserve officials and the private sector economists foresee an unprecedented contraction in GDP in the April-June quarter.

In the last quarter of 2019, the largest economy in the world had grown by 2.1% in its normal course.

US stocks had one of their worst days on Wednesday, with a decrease in risk appetite, new coronavirus cases, and the expectations of an increase in weekly unemployment claims.

Futures fell further on Thursday on Wall Street. The Trump administration’s plans to introduce fresh tariffs on $ 3.1 billion worth of EU and British goods also have an impact.

Record rises in virus cases in many states raised concerns that the second wave of outbreaks would lead to a resumption of harsh lockdown measures.

Oil fell back below $40 a barrel on Thursday, with more than 5% drop on Thursday compared to the previous session, as record figures in US crude oil inventories and coronavirus outbreaks created the suspicion regarding improved fuel demand.

The Energy Information Administration said on Wednesday that US crude oil inventories have increased by 1.4 million barrels.