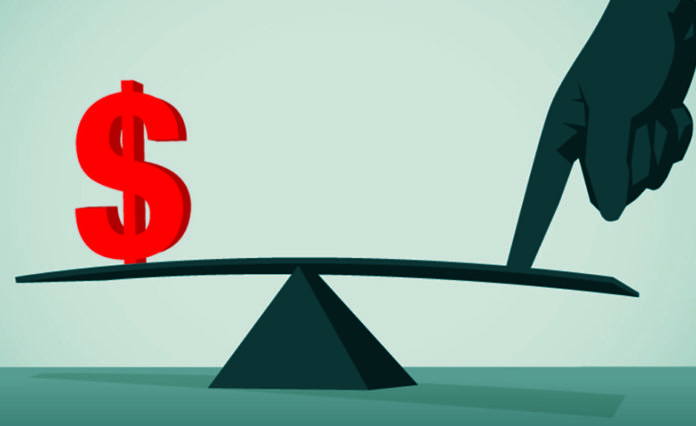 Leverage allows investors to trade a much bigger volume than they initially would. Having limited capital investor can borrow a certain amount of the money from the broker and get much bigger market exposure.

Leverage in the forex market is one of the highest thus making it much more attractive than the stock market for example. The reason behind is the high liquidity of the forex market. Depending on the broker and the size of the position, leverage usually amounts to 50:1, 100:1, 200:1… If a trader takes 100:1 leverage having $1 000, he can trade $100 000 and thus increase his potential profits. However, along with profits the possibility for loss is also increased. In case of adverse price movements, leverage can induce high losses.

Leverage can be calculated using the margin percentage and trade size.

Leverage is often referred to as a two-edged sword because both profit and loss are possible and in a much greater amount than an investor has. When using leverage trader must conduct risk management and use trade strategies to limit potential risks he is exposed to.

Spread represents the difference between Bid and Ask price of a certain instrument. The bid price is the maximum price at which the trader is willing to buy. Ask price is the minimum price the seller is willing to take. The spread represents the cost of the trade and is usually measured in pips. One pip equal to 0.0001. Depending on the volatility and liquidity, the spread can change if it is variable. Moreover, the spread of major currency pairs is lower than those of emerging markets. Higher trade volume leads to lower spread. Spread can be also fixed.

Spread is available in the OTC trading as well.

There are several reasons and factors determining the spread amount. Most importantly, the primary one is market liquidity of a currency. Popular pairs are traded with the smallest spreads because they are easily available. But exotic pairs tend to have higher spread rates because it is more difficult to come by them. Spread rate also varies on the basis of the volume of a forex transaction.

When a position is left open through the end of the trading day, interest on that position will be charged or paid to a trader depending on the interest rates of the two currencies in the pair. It is also called rollover interest as rollover represents the process of moving open positions to the next trading day. It is also called the cost of the carrying. If a trader is buying the currency with a higher interest rate, the swap will be deposited, while the trader selling the higher interest rate currency, will be charged the swap.

Swap charges are automatically calculated at the end of trading days. For most currency pairs a three-day swap is applied from Thursday on. Multiple-swaps might be charged for others, such as commodities in the forex market. Overnight swap amounts for each currency pair or other securities are detailed on MetaTrader platform.

The difference between the two currencies traded helps us calculate a swap fee depending on whether a position is long or short. The interest rate of each currency determines if by borrowing or lending, a swap is charged or deposited.