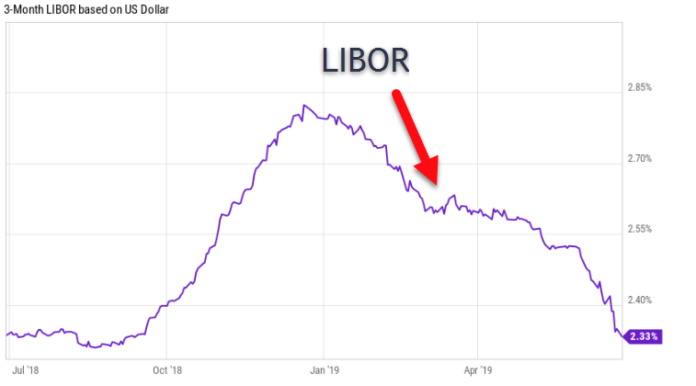 LIBOR stands for London Interbank Offered Rate and serves as a globally accepted key benchmark for short-term interest rate indicating borrowing costs between banks. It is produced for five currencies (CHF, EUR, GBP, JPY and USD) and seven tenors (Overnight/Spot Next, 1 Week, 1 Month, 2 Months, 3 Months, 6 Months and 12 Months) based on submissions from a reference panel of between 11 and 16 banks for each currency, making in total 35 rates every London business day.

The rate is calculated and published each day at around 11:55 am London time by the Intercontinental Exchange (ICE). The most commonly quoted rate is the 3 Months US dollar rate, usually referred to as the current LIBOR rate.

LIBOR also serves in determining interest rates for consumer loans, so it impacts consumers just as much as it does financial institutions. The interest rates on various credit products fluctuate based on the interbank rate.

LIBOR rate was calculated using the trimmed mean approach applied on all the responses received. Trimmed mean is a method of averaging which eliminates a small specified percentage of the largest and smallest values before calculating the mean.

Some of the major banks allegedly manipulated LIBOR rates. They submitted artificially low LIBOR rates to keep them at trader’s preferred levels. They included Barclays, ICAP, Rabobank, Royal Bank of Scotland, UBS, and Deutsche Bank which faced heavy fines. Nowadays, the Fed is urging the US financial industry to move away from LIBOR. Libor will be phased out entirely by 2022.