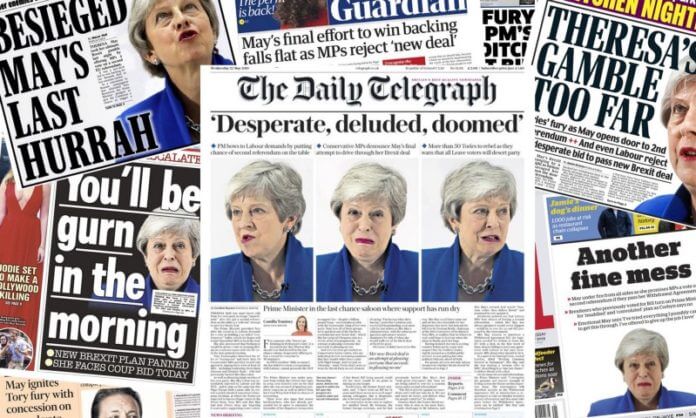 British PM May said she will include in her Withdrawal Agreement a requirement for MPs to vote on whether to hold another Brexit referendum.

By offering this possibility and a compromise on customs arrangements, May hopes to win over opposition Labour lawmakers. But Labour leader Corbyn said Party will not support it describing May’s new offer as “largely a rehash of the government’s position“ in talks with the opposition that broke down last week.

Scottish First Minister Nicola Sturgeon too gave a quick reaction by denying May support as she said Scotland voted against Brexit and accepting the deal meant Brexit and not a second referendum.

Boston Fed President Rosengren said he is not as worried as some of his colleagues about inflation currently being below the Fed’s target. He said there is “no clarion call” to push interest rates either way.

On the other side of the Atlantic, and earlier the day, European Central Bank President Mario Draghi will appear in front of cameras to deliver a speech.

USTR Lighthizer will meet with officials from the EU and Japan in Paris on Thursday on the sidelines of the ministerial meeting of the 36-member OECD in Paris on Wednesday and Thursday. They will discuss the non-market-oriented policies and practices of other countries, focusing on China’s subsidies. The meetings come ahead of Trump’s weekend trip to Tokyo where he will sit down with PM Shinzo Abe.

BOJ board member Harada called policymakers on Wednesday to ramp up stimulus “without delay” if a slowdown in the economy still prevents achieving its price target. Harada added the planned sales tax hike in October could weigh on inflation by reducing consumption and increasing the risk of recession.

The OECD reported economic growth in China and the US could be 0.2–0.3 percent lower on average by 2021 and 2022 if the two economies do not ease on tit-for-tat tariffs. The global economy would grow by only 3.2 percent this year, the slowest since 2016, as growth in trade flows is nearly halved this year. Next year global growth would be slightly better at 3.4 percent if both nations pull back from tariffs.