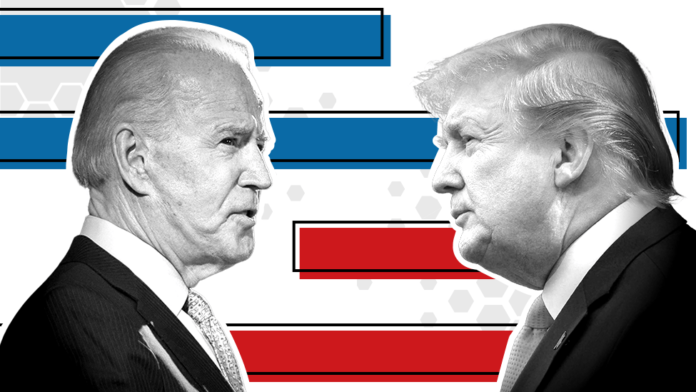 Four years after Donald Trump’s surprise presidential victory shook the markets, investors are preparing for short-term but harsh and fluctuating trade turmoil and major long-term policy changes on the eve of Tuesday’s US election.

Biden is ahead in national opinion polls, but the situation in the swing state battlefields where the race is tight enough to mean another victory for Trump.

Markets and US institutions fear a contested election. Anything but a controversial election would be good news for stocks, especially a decisive victory for either candidate.

For weeks, market movements played positively as investors bet on a “Blue Wave” in which Biden would become president, and Democrats would also take over the US Senate after their majority in the House of Representatives to take full control of the Congress.

These expectations included a steeper yield curve, a weaker dollar in anticipation of a fiscal stimulus package, and gains from industries that are expected to benefit from the Biden presidency, such as green or solar stocks.

The real storm is taking place in the states of Pennsylvania and Florida, even though Biden is at least 10 points ahead nationally according to the latest polls. The number of delegates in both states is of critical importance to both candidates and the election may be tied by votes from the two states.

European governments struggling to prevent the COVID outbreak have taken new drastic measures at the cost of further damage to unaffected individuals and the general economy.

The closure of many businesses in the UK and new measures that will bring the socio-economic life to a halt have started to attract the public’s reaction.

The UK, which has the highest official death rate from COVID-19 in Europe, is grappling with more than 20,000 new coronavirus cases a day. Scientists warn that the “worst-case” scenario in which 80,000 people could die might become a reality.

Along with Spain and Italy, other countries such as France, Germany, Belgium, and the Netherlands announced new restrictions on freedom of movement and activities as infections increased and hospital intensive care units got filled.

Chancellor of Germany Angela Merkel said she has positive prospects that coronavirus vaccine approval will be given in the coming months, but warned that the government may have to limit private contact between people all winter.

The European Central Bank (ECB) policymaker and also President of the Finnish Central Bank Olli Rehn said on Monday that the ECB should regularly review its strategy going forward.

“I can consider it a good idea that in the future we will review the ECB’s monetary policy strategy regularly, for example, every five years,” Rehn said at the Bank of Finland’s webinar on the ECB’s ongoing strategic review.

China’s factory activity soared for the sixth consecutive year in October, as confidence in business in the country reached the strongest level in recent years, according to a special survey released on Monday.

The Caixin / Markit Purchasing Managers Index for Chinese production came in at 53.6 in October. This is higher than the median estimate of 53.0 made by analysts who participated in a Reuters poll. Survey results have been at the highest level since January 2011.

While PMI values ​​above 50 indicate expansion, those below this value indicate contraction. PMI readings are sequential and show month-to-month expansion or contraction.

China’s vast manufacturing industry is recovering, as the coronavirus outbreak in the country appears to be largely under control. Wang Zhe, a senior economist at Caixin Insight Group, said the latest figure shows that the country’s production recovery continues to accelerate.