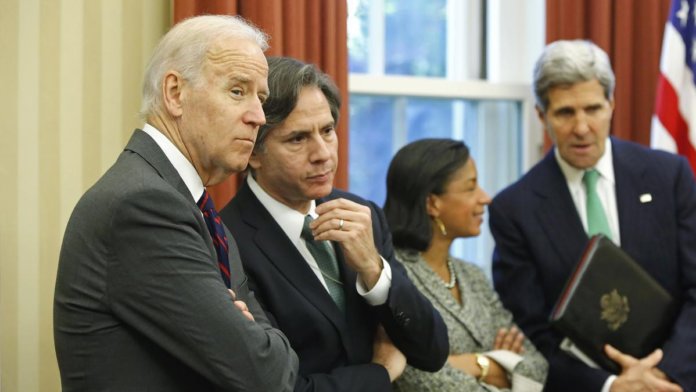 With the promise of bringing America back to the global stage as a leader, US President-Elect Joe Biden is about to announce the names that will form his cabinet, even though President Donald Trump continues to refuse concession.

Biden will name Antony Blinken, a longtime personal confidante, career diplomat, and Obama-era government official, as Secretary of State, according to Axios, a prominent US news website that closely follows Washington.

Biden’s appointment of pro-liberal interventionist Blinken contrasts sharply with Trump’s isolationist “America First” policy, placing the burden on the nascent administration to restore the transatlantic relations of the United States, which have suffered unprecedented damage under Trump.

According to sources close to Biden, Blinken might be announced as early as Tuesday.

During the campaign, Biden fiercely criticized Trump’s stand-alone foreign policy, vowing recommitment to NATO and other global pacts, while pledging to seek the help of experts to tackle the COVID crisis and other domestic problems. Biden also pledged to rejoin the Paris Climate Agreement, the World Health Organization, and potentially the Iran nuclear deal.

The European Union Brexit negotiator said on Monday that large differences remain in trade talks with the UK, but both sides are pushing hard for a deal.

“Time is short. The fundamental differences still remain, but we continue to work hard for an agreement,” EU chief negotiator Michel Barnier said.

Trade negotiators resumed discussions on the form of the new EU-UK trade relationship after the post-Brexit transition ended on December 31st.

British Chancellor Secretary Rishi Sunak will announce a new spending plan Wednesday, which will cover the government’s initiatives to combat the impact of the coronavirus on the UK economy and to protect jobs.

Sunak recently paved the way for massive tax hikes in spring, warning that the spending review will include estimates that clearly reveal the “scale of the economic shock” caused by the Covid-19 crisis.

The review report, which usually includes a three-year draft is this time limited to the next year due to the uncertain economic climate.

Government borrowing reached £ 260.8 billion in the period between April and October this year, as London increased spending to finance additional programs and combat the Covid-19 crisis.

The US Federal Reserve will publish the minutes of this month’s monetary policy meeting on Wednesday.

The minutes will give investors an idea of ​​how seriously the Fed is considering providing more stimulus in light of the increase in coronavirus cases worldwide.

There were no policy changes at its meeting in early November, but chairman Jay Powell said tweaks to the asset purchase program were discussed to provide additional stimulus.

The Fed had previously pledged to purchase unlimited amounts of US government debt with a current monthly purchase rate of $80 billion at all Treasury maturities. One suggestion that has gained popularity among investors is that the Fed should focus most of its purchases on long-term debt.

The European Central Bank will release the minutes of its meeting in late October, where the ECB promised to “readjust its instruments” and investors will seek more information on the ECB’s options.

US economic growth is one of the most important data to be followed this week. The third-quarter gross domestic product figure that will show how the world’s largest economy is performing in trying to recover from the damage of the Covid19 outbreak is also set for release on Wednesday.

The US economy is expected to grow slightly more quarterly than the previous quarter’s 33.1% growth.

Also on Wednesday, personal spending will be seen to slow somewhat in October.

On Thursday, initial unemployment claims are expected to have fallen to 730,000 for the week ending 16 November.

Eurozone data are expected to indicate further declines in business activity in November, with PMIs to be the focus this week.

According to the consensus calculated based on a Reuters survey of economists, the overall PMI score in the eurozone — both services and production — is forecast to decline from 50 to 49.3 in the previous month.

For the first time since June, reading falls below the critical 50 mark means most businesses are reporting a contraction in activity compared to the previous month. Likewise, the new restrictions by the governments have been effective in this.

The continued decline in service activities and data expected to show a slowdown in the manufacturing sector will increase the pressure for the ECB board to consider more monetary stimulus at its December meeting.