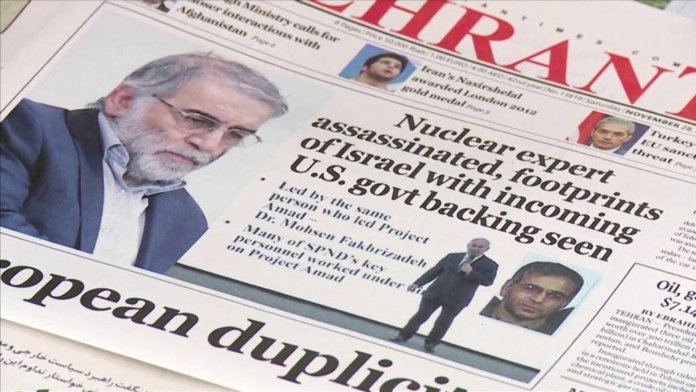 Brexit talks are starting again after a weekend pause, with yet another meeting of EU and British negotiation teams who have so far failed to resolve deep disputes on at least three issues between themselves

London and Brussels need to reach a trade agreement before 1 January 2021, when the Brexit transition ends.

Talks are blocked over the question of how to implement any agreements, as well as guarantees for an “equal playing field,” for businesses and fisheries.

The Saudi Arabian-led Organization of Petroleum Exporting Countries OPEC and its allies led by Russia will hold a two-day meeting that begins Monday on production cut policies.

The cartel discusses its options to deepen or extend the output cut policy. The group may decide to throttle the valves a little more for a few months to help lay the foundation for a price recovery.

The assassination of a nuclear physicist and IRGC commander Mohsen Fakhrizadeh, known as the head of Iran’s civil and military nuclear programs, in eastern Tehran last week has heightened the dangerous tensions between the Islamic Republic and Israel, as well as the former’s chief ally, the United States.

While the lame-duck US President Donald Trump’s outgoing, the assassination provided a solid justification for increased risk perception in the market as Iran blamed Israel and complained to the UN.

Statements and actions from Washington, Tehran, and Jerusalem should be followed carefully.

UK Prime Minister Boris Johnson faces a tough House of Commons vote on Tuesday. The 70 MPs from Johnson’s ruling Conservative Party who founded the ‘Covid Research Group’ are skeptical of the new Covid restrictions being introduced in the UK and want more evidence on the effectiveness of these measures.

Britain will revert to a tiered Covid restrictions system when the current lockdown ends on Wednesday.

Eurozone finance ministers will meet virtually on Tuesday to discuss taxation and budget issues, as well as Italy’s G20 presidency in 2021.

EU health ministers meet on Wednesday to discuss the Covid19 outbreak. Policymakers are preparing to relax the restrictions before Christmas, but carefully.

The Organization for Economic Cooperation and Development (OECD) is releasing its updates on the impact of the coronavirus on economies on Tuesday. The OECD will be presenting its global economic outlook with estimates on production, employment, prices, financial and current account balances.

Powell and Mnuchin in the Congress

US Federal Reserve chair Jay Powell will be present with Treasury Secretary Steven Mnuchin before the Senate Banking Committee on Tuesday and a day later at the House Financial Services Committee to discuss the aid package CARES Act meant to support the economy against the impacts of Covid19.

The US Treasury recently decided not to expand some of the emergency credit instruments set up by the Fed at the onset of the pandemic.

The Reserve Bank of Australia RBA holds its meeting on monetary policy change on Tuesday. The RBA had cut rates to new lows at its meeting in November.

Japanese Finance Minister Taro Aso will meet with the private sector and public bank executives on the financial difficulties that emerged at the end of the year and left some companies bankrupt.

The UN Environment Program will release its report Wednesday, measuring the gap between the Paris Agreement goals and the planned coal, oil, and gas production of countries. UN Secretary-General António Guterres will give a speech entitled “State of the Planet” on the same day.

The seven-day extension the Trump administration gave to ByteDance, the Chinese owner of the TikTok application, to sell its US operations over US national security concerns expires on Friday.

Canada is releasing its third-quarter GDP on Tuesday, Australia has the same data on Wednesday.

The world’s largest economy publishes its non-farm payroll data on the first Friday of the month as usual.

The jobs report will provide the latest monthly update on how the US labor market is performing under the second wave of coronavirus infections.

A median estimate from economists surveyed by Reuters indicates that US employers added 500,000 new jobs in November. There were 638,000 new hirings in the previous month.

The first weekly jobless application figures will also be announced on Thursday. Last week’s data was added to the gloomy picture and rose to 778,000, the first weekly increase in a row since July.

Tuesday’s eurozone inflation figures are expected to confirm a fourth consecutive deflation and put more pressure on the European Central Bank to increase its stimulus next month.