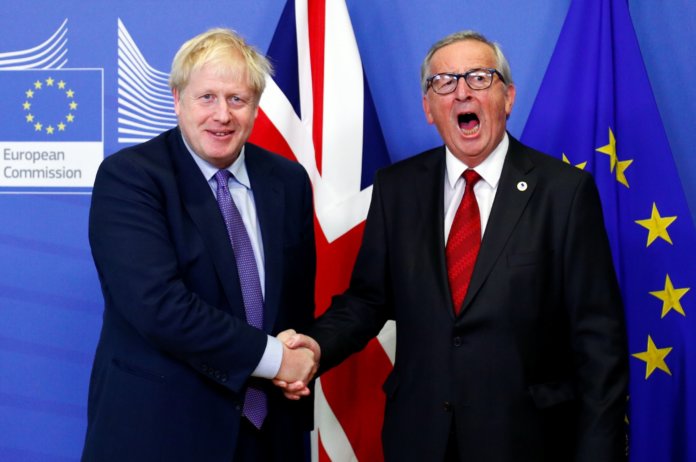 UK Prime Minister Boris Johnson scrambled a deal with European Union on Thursday after weeks of uncertainty, bolstering the pound to shoot up in the immediate aftermath of a joint announcement with President of the European Commission.

Leaders of remaining 27 EU countries also agreed to the deal that saw concessions from both regarding the Northern Ireland border, and the British province’s customs status. However, all opposition parties in the UK rejected the deal and said they will vote it down during a Parliamentary session Saturday. Johnson government’s minority partner DUP also forcefully rejected the deal and said they would encourage Conservatives to kill it.

The US struck a ceasefire with Turkey on Thursday that will halt cross-border incursion into Syria and fighting in exchange for a withdrawal by the Kurdish YPG militia from the border areas. The agreement followed a high-level delegation visit led by the US Vice President Mike Pence to Ankara where they met Turkish President Tayyip Erdogan. But Senators from both sides of the aisle continued to voice their strong doubts regarding Turkey although they welcomed the agreement. Bipartisan sanctions threats remain on the table.

China’s third-quarter economic growth turned out to be lower than expectations. Gross domestic product (GDP) increased just 6.0% year-on-year, in a loss of momentum compared to the second quarter’s 6.2% growth. Chinese central bank announced new measures to stimulate the economy battered by the trade war with the US.

Core consumer inflation in Japan slowed down to near a two and a half year low. The CPI rose 0.3% in September from a year earlier. Japanese Finance Minister Taro Aso said on Thursday the government was ready to deploy fiscal stimulus steps flexibly if the economy needed fresh support to fend off risks from slumping global demand and the U.S.-China trade war.

Japanese government has decided to send its own self-defense forces to the strategically important Strait of Hormuz between Arabian peninsula and Iran instead of participating a proposed US-led coalition task force to protect petroleum vessels, the Asahi newspaper reported on Friday.

Saudi Aramco sources told media on Thursday that the oil giant has put off the scheduled launch of its initial public offering as it awaits third-quarter earnings results that should hopefully boost investor confidence in the world’s largest oil company.

US Energy Secretary Rick Perry will step down by the end of the year, President Donald Trump said on Thursday, confirming earlier reports.