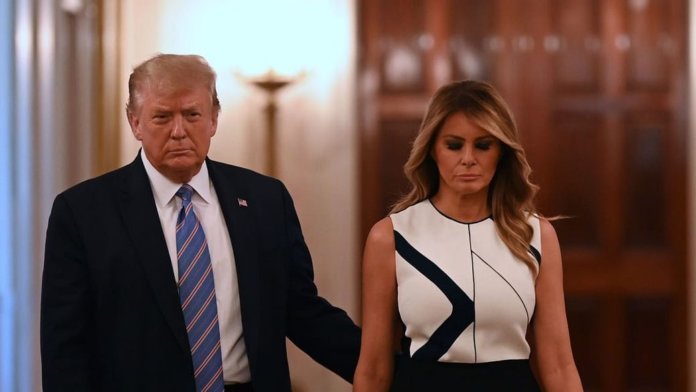 US President Donald Trump announced on Twitter that he and his wife Melania Trump tested positive for Covid19.

“Tonight, FLOTUS and I tested positive for COVID-19. We will begin our quarantine and recovery process immediately. We will get through this TOGETHER!,“ he said, making the announcement late Thursday EST.

Shortly before that Trump announced that his communications director Hope Hicks has tested positive.

Following the tweet the Japanese yen hit a one-week high at 104.95 per dollar, seeing its steepest rise in a month. The US dollar rose as much as 0.7% against the risk-sensitive Australian dollar.

The dollar and the yen also pulled back as investors were puzzled as to how the situation could affect the election. Exceeding $1,900 an ounce again (XAUUSD) gains were balanced at $1905 at lunchtime in London.

Trump’s Covid19 test’s impact on the markets’ risk perception has been relatively limited. If it were in the first months of the outbreak, risk aversion would be more extensive. The fact that those who got the virus survived at a high rate in all age groups and that Trump, 74, remains a healthy and active individual with no use of alcohol, smoking, and has no chronic disease. The only complicating factor is that Trump is obese at 111 kilograms weight and 1.91 centimeters height.

UK Prime Minister Boris Johnson is preparing to intervene in the post-Brexit trade negotiations for the first time in months after European Commission President Ursula von der Leyen announced on Thursday that they were taking legal action against the UK government on charges of violations.

According to a report on Friday citing government sources, the British paper The Times wrote that Johnson will call von der Leyen tomorrow (Saturday) to discuss the course of Brexit trade negotiations.

According to British officials, the prime minister’s involvement in the process with little progress so far means that trade, fishing, and security talks with the European Union are on the brink of a breakthrough.

“The Prime Minister will talks with President von der Leyen tomorrow afternoon to evaluate the negotiations and discuss next steps,” said a spokesman for the Prime Ministry.

In his search for the European leader, Johnson is expected to focus on the EU’s letter of notification and the final round of negotiations.

European Central Bank (ECB) board member Fabio Panetta said on Friday that the bank should be ready to issue a digital euro in addition to banknotes “when needed”.

Major central banks around the world are reviewing digital versions of their currencies to meet the demand for electronic payment methods and against proprietary cryptocurrencies like Bitcoin and Facebook’s Libra.

The ECB said in a research report released Friday that the digital euro can help when citizens drop cash, take over foreign forms of electronic money, or other payment methods cannot be used.

“We must be ready to issue a digital euro as needed and according to developments in our environment,” Panetta said in a blog post accompanying the research.

The ECB will continue its digital euro review until mid-next year for the decision to continue with the project, which is currently open for public consultation.