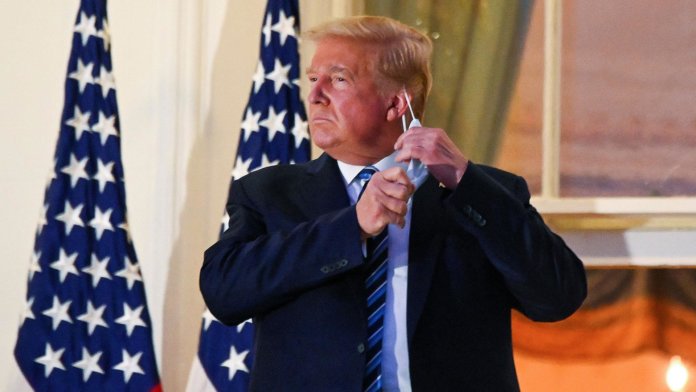 US President Donald Trump, whose Covid19 test came out positive last week, returned on Marine One helicopter from Walter Reed military hospital to the White House on Monday in a show of strength broadcast on all national TV channels.

“Don’t be afraid of COVID. Don’t let it dominate your life,” Trump wrote in a short Twitter message he sent out shortly before leaving the hospital.

Trump, treated by an army of doctors and undergoing experimental treatment, has repeatedly downplayed the virus that killed more than 1 million people worldwide and persistently resisted calls for more stringent socio-economic restrictions to contain the pandemic.

The Republican president who competes for re-election against the Democrat Joe Biden in the November 3 elections, was hospitalized on Friday after he was infected with the virus.

Trump’s removal of his mask on the balcony of his residence, where he climbed the stairs after the helicopter arrived at the White House, sparked strong reactions and accusations of irresponsibility among American reporters and commentators.

US House of Representatives Speaker Nancy Pelosi and Treasury Secretary Steven Mnuchin spoke over the phone Monday over fresh stimulus measures but failed to reach a compromise.

In the world’s largest economy where the epidemic caused trillion dollars in losses and left millions unemployed, negotiations on a 5th aid package between the Trump administration and the Congress, which constitutionally holds the power of the purse, are set to continue today.

Pelosi told her Democratic colleagues in the Congress that negotiations with Mnuchin were going very slowly, the Politico news website, which closely monitors Washington, reported.

US Secretary of State Mike Pompeo held important meetings in Tokyo on Tuesday with his counterparts from Japan, Australia, and India, Washington’s closest allies against China’s dangerous and growing regional influence.

Pompeo’s first visit to East Asia since July 2019 takes place at a time when ties between the United States and its strategic rival China have been at their worst in decades.

The Quad, formed by four democracies Japan, India, and Australia under the leadership of the US, is on a path of institutionalization against the Chinese Communist Party.

As Quad moves towards becoming a sort of Asia-Pacific NATO, as Chinese officials accuse it of being, the group’s foreign ministers discuss China’s territorial claims in the South China Sea and ways to strengthen their diplomatic and military ties at their meeting in Tokyo.

“Once we’ve institutionalized what we’re doing — the four of us together — we can begin to build out a true security framework,” Pompeo told Nikkei Asia Review while visiting Tokyo for the informal grouping’s foreign ministers meeting later the same day.

He called this network a “fabric” that could “counter the challenge that the Chinese Communist Party presents to all of us.”

The Reserve Bank of Australia (RBA) kept interest rates at a historic low of 0.25 percent for the seventh month in a row.

The continental country’s central bank, which held its policy meeting on Tuesday, decided not to change the interest rate, despite growing concerns about the long-term economic cost of COVID-19.

RBA Governor Philip Lowe said the decision was based on the uneven recovery of the global economy due to the coronavirus.

“The global economy is gradually recovering after a severe contraction due to the epidemic. However, the recovery is uneven and its continuation depends on containment of the virus,” Lowe said.

“Infection rates have decreased in some countries, but have increased in others. Recovery has been strongest in China, where conditions have improved significantly in recent months. Globally, inflation is very low and below central bank targets,” he added.

China is Australia’s biggest trading partner, despite the deepening security and diplomatic issues.