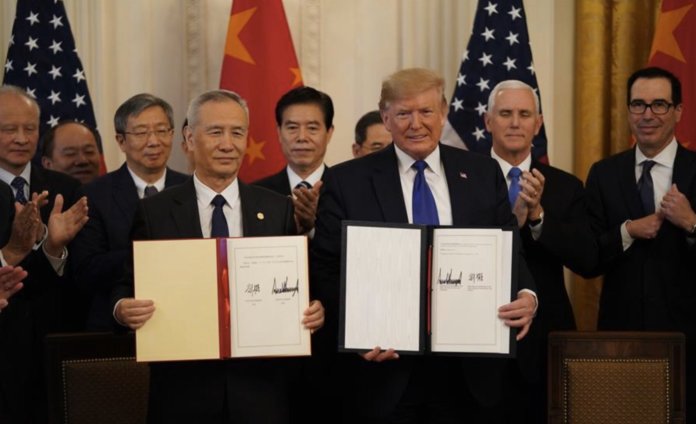 China will increase its purchases of US goods and services by $200 billion over the next two years in exchange for the withdrawal of tariffs under the Phase One trade agreement, signed on Wednesday by the world’s two largest economies.

The world’s major stock indices from North America to Asia rose to record levels after US President Donald Trump and Chinese Vice Premier Liu He signed the deal at the White House. Dow Jones for the first time in history closed the day over 29,000. However, the concerns that the long-running trade tensions would persist, and the fact that a large number of thorny issues were still unresolved, stalled the markets’ rise.

Energy prices also rose with China’s commitment to purchase more oil and gas from the US.

Beijing’s commitments include 54 billion dollars of additional energy, 78 billion dollars of manufacturing, 32 billion dollars of agricultural products and 38 billion dollars of service purchases, according to the agreement released by the White House and the Chinese Ministry of Finance. The deal canceled US tariffs on Chinese-made mobile phones, toys, and laptops, and halved the tariff rate to 7.5 percent on $120 billion in other Chinese goods, including flat-panel televisions, Bluetooth headsets, and shoes.

The Washington Post wrote on Wednesday that the Trump administration threatened to impose 25 percent tariffs on automobile imports from the European Union unless Britain, France, and Germany accuse Iran of violating the 2015 nuclear agreement.

The three European countries launched a dispute mechanism under the nuclear agreement on Tuesday. Launching the mechanism amounts to a formal charge that Tehran has violated the terms of the agreement.

Iran’s President Hassan Rouhani said on Thursday that Iran is now enriching more uranium than the levels before it agreed to a nuclear deal with the world powers in 2015.

US crude production rose to a record 13 million barrels a day.

The US Senate’s Republican Majority Leader Mitch McConnell said he expected the Senate to approve the final version of the new North American trade agreement (US-Mexico-Canada) on Thursday and send it to President Trump.