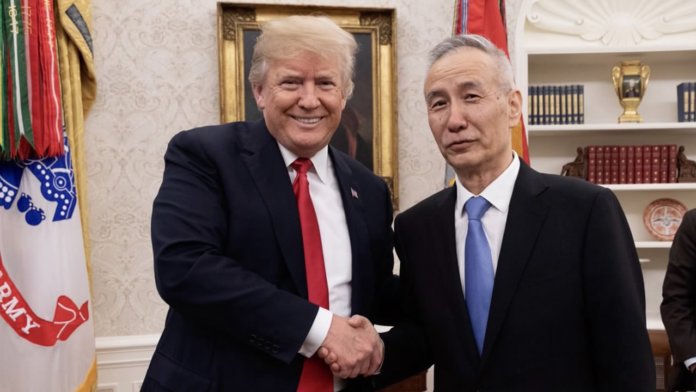 US President Donald Trump and Chinese Vice Premier Minister Liu He will sign the Phase-1 trade agreement, that opens up the way for a significant increase in China’s purchases of American manufactured, agricultural, energy and service products at a ceremony at the White House today.

The US-China trade war will thus enter a new and possibly softer phase. Trump and Liu will sign a 86-page document in front of more than 200 invited guests from business, government and diplomatic circles. The exact time of the ceremony has not yet been announced.

Liu met with US Trade Representative Robert Lighthizer yesterday, but according to the American public broadcaster NPR, the Chinese translation of the text into was just about to end late Tuesday afternoon.

US Trade Representative Lighthizer and Treasury Secretary Mnuchin announced in a joint statement that the United States and China have no consensus on future tariff cuts and that all details of the P-1 trade agreement with China will be made public on Wednesday.

“The tariffs will remain in effect until a Phase-2 trade agreement with China is reached. Trump may consider lifting tariffs under Phase-2,” Mnuchin said.

The German economy grew by 0.6% in 2019. This is the weakest growth rate since 2013 and a significant slowdown compared to the previous year. One of the main reasons for the slowing growth was that exporters in Europe’s largest economy struggled with problems stemming from trade disputes.

According to the preliminary figure published by the German Federal Statistical Office on Wednesday, it was in line with expectations but was well below the 1.5% gross domestic product (GDP) growth in 2018.

Despite the difficulties, the office’s statistical official Albert Braakmann pointed out that the growth of Germany was brand new. “This is the longest period of growth since Germany’s reunification,” he added. In 2019, strong household consumption, high government expenditures, and growing construction supported the growth.

According to new figures that may increase expectations that the Bank of England (BoE) will lower interest rates, inflation in Britain unexpectedly fell to the lowest level of the last three years.

The UK National Statistics Office said that consumer prices rose by 1.3% in the last month of last year compared to 1.5% in November, the smallest increase since November 2016. This figure was below the expectations of a 1.5% increase.