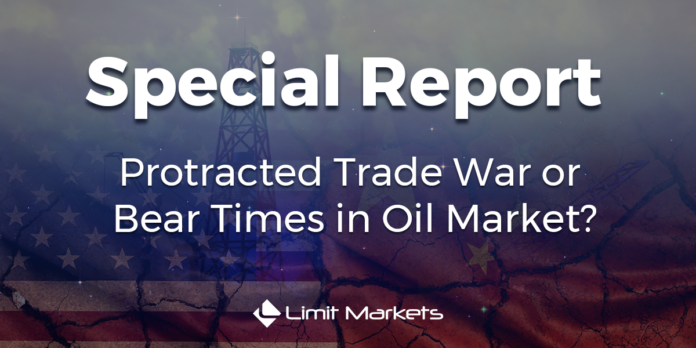 Protracted trade war or bear times in the oil market?

Global oil prices entered into a plunge as the earlier supply-related concerns now turned into fears of lower demand with the Sino-US trade war appearing to extend into the rest of the year, if not the next one. The downward movement is already perceived to be a bear market by some market participants. Coming down to the vicinity of the 50 dollar level, Brent prices have fallen over 20 percent in the past four months.

One primary root of the issue is an expected lowering of the Chinese consumption. US President Donald Trump’s out of blue decision to impose even more tariffs of up to 10 percent on the remaining 300 billion dollar-worth Chinese imports have aggravated the worries. China’s response of halting the import of American agricultural produce that will surely hurt US farmers and letting the yuan drop to a 7-per-dollar level constitute two other reasons which indicate a lengthened battle.

Given the prolonged nature of the China-US trade spat, it is highly likely that China’s demand for oil will go down in the foreseeable future, depending on the falling production, as the world second-largest economy prepares for a potential recession globally and at home. Beijing’s strategy seems to be patience and endurance until the 2020 US presidential elections when it hopes that Trump will fail in being reelected.

Recession worries in the US

The world’s biggest oil importer, China’s demand for the commodity has progressively been falling over the past several months, as have the forecasts projected for the remainder of this year and 2020. In its August report, the US Energy Information Administration cut its forecast for the 2019 global oil demand growth to 1 million barrels per day or 70,000 bpd.

A similar scenario goes for the US, the world’s biggest oil producer, due to the fact that a recession in the country’s economy could take place, despite Trump’s assurances otherwise. Such an eventuality in the competitive and overheated US economy will further reduce demand for oil there as nationwide production takes a slump.

The Iran and OPEC factors

Another issue that will contribute to the emerging bears in the energy markets could be a Chinese move to restart purchasing the US-sanctioned Iranian oil. Beijing joined other US partners in halting all oil imports from Iran in May due to the threat of coming under sanctions itself. However, Beijing might decide to just go its own way by disregarding possible US punitive measures in the current circumstances. In that case, the flow of Iranian oil back into the world’s largest energy consumer will hit prices hard, bringing crude to 30 dollar levels.

Amid all the risks, Arab-led OPEC producers will have to take action to protect their interests in their next scheduled December summit. All the factors signal a yet another extension of the cartel’s supply cut policy which member states have agreed to late last year.