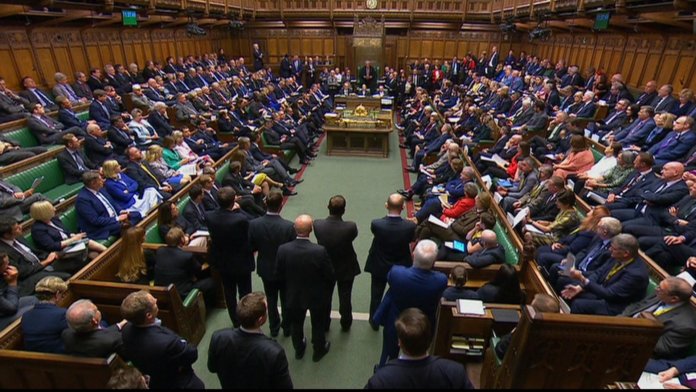 Ukraine’s President Volodymyr Zelensky told the media at the United Nations that ‘he was not pushed’ by anyone to re-launch a judicial investigation into the former Vice President and one of US President Donald Trump’s Democratic rivals Joe Biden and his son Hunter’s business activities.

Zelensky was meeting Trump at the UN when he denied any pressure as the White House released a transcript of the July 25 phone call between the two leaders.

The summary of the call showed no quid pro quo proposal by Trump to Zelensky as was earlier reported in relation to the re-opening of a case against Bidens in exchange for a 400 million dollar worth military aid for Kyiv approved by the Congress. House of Representatives’ Speaker Nancy Pelosi has ordered six committees to launch an impeachment inquiry into Trump’s conduct over allegations of seeking foreign help to counter a political rival.

UK Parliament is Back to Work

The United Kingdom’s Parliament came back to work on Wednesday after the Supreme Court ruled that Prime Minister Boris Johnson’s advice to the Queen to prorogue the Commons until mid-October was unlawful.

Johnson said he thought the ruling was wrong but nonetheless had to abide by it. At the Parliament he once again challenged the opposition to an early general election, bring down his government via a vote of no-confidence or let him get Brexit done at the end of the month.

Opposition to Look for Tactical Options

Opposition parties led by the Labour are meeting Thursday to discuss parliamentary tactics on how to prevent a no-deal Brexit. EU’s chief negotiator Michel Barnier said he was ready to work on any new and feasible alternative proposal regarding Brexit.

Bank of Japan Governor Haruhiko Kuroda praised the Japanese domestic demand as resilient. At a meeting with securities firms in Tokyo, Kuroday said the economy was expanding at a moderate pace and expected inflation to gradually pick up toward the bank’s 2 percent target. However, he warned, that downside risks for inflation outlook remained high.

The BoJ boss said he was watching carefully how global economy could harm the economy and counted the US-China trade war, Brexit, the Saudi/US tensions with Iran as risk factors.

On Wednesday, Trump and Japan’s Prime Minister Shinzo Abe signed a limited trade deal that is opening up Japanese markets to some 7 billion dollar-worth of American products annually.

Speaking on China, Trump said that Beijing wanted to make a deal “very badly” and that it could happen sooner than a lot think. On Thursday, Chinese foreign ministry used conciliatory remarks in return and renewed hopes for a deal.

US Energy Information Administration reported Wednesday that its crude inventories showed an increase of 2.4 million-barrel during the week that ended on September 20, compared to 1.1M the previous week.

What to Watch on Thursday

During the day, investors should watch US GDP figures, speeches by the Bank of England Governor Mark Carney and European Central Bank President Mario Draghi.