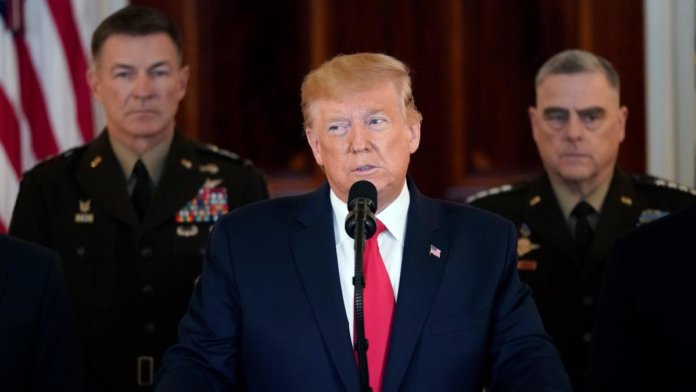 US President Donald Trump returned from the edge of a fresh and more widespread war in the Middle East in the wake of two waves of Iranian missile attacks on American bases in Iraq that did not cause any casualties.

‘The crisis is over’

With the passing of the danger precipitated by the US killing of the Iranian regime’s number 2 General Qassem Soleimani, gold and oil prices fell from their recent highs as American stocks set new records, with Asian and European markets entering Thursday with gains. The Iraqi Shiite leader Moqtada al-Sadr said ‘the crisis is over’ after Trump’s speech.

Trump stepped back, when the Tehran regime stepped back with a flashy, noisy barrage of missiles that caused minimal damage and at least saved the face for the mollahs.

Oil fell below $60 a barrel, gold dropped to 1550 dollars, as the yen and franc have up their previous gains.

Trump sufficed by announcing the imposition of new sanctions in response to Tehran’s missile attack. Further softening his tone, Trump sent a reconciliatory message to the people of Iran, adding that “Iran can be a great country”. The president, slamming his predecessor Barack Obama, reiterated the need for a new agreement with Iran.

The Australian economy may weaken due to bush fires that have burnt land the size of Ireland. The fires may intensify with warmer and drier weather in the coming months. Goldman Sachs pointed out that in the coming months due to fires, tourism will decrease, private investments will decline as farm production may take a blow.

The Australian central bank will hold its monetary policy meeting on February 4. A majority of analysts expect an interest rate cut of 25 basis points.

European Union chief Brexit negotiator Michel Barnier said on Thursday that a comprehensive trade agreement between Brussels and London on future relations will take longer than the 11-month transition period that will begin with Britain’s departure from the EU at the end of January.

At a press briefing Thursday, the Chinese Ministry of Commerce said that a senior delegation led by Deputy Premier Liu He will be in Washington on January 13–15 to sign the Phase 1 trade agreement with the United States.