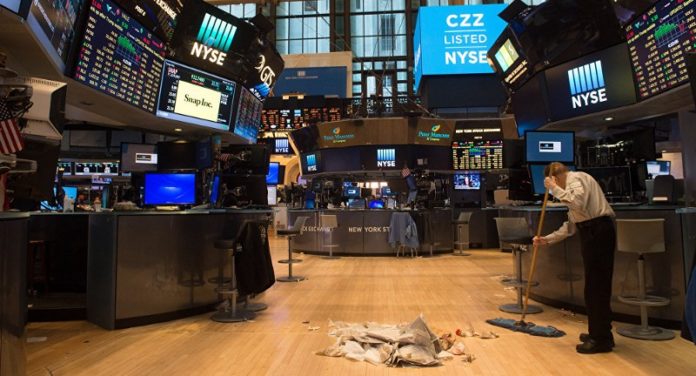 Apple’s warning regarding a cut in revenue for the first quarter of the year due to China slowdown sent US stocks down on Thursday. Panic rose and S&P 500 closed down at nearly 2.50 percent loss, Nasdaq Composite fell over 3 percent and Dow Jones Industrial Average plunged 2.80 percent. Apple CEO Tim Cook wrote in his letter to investors that Washington’s trade war with Beijing was one of the contributing factors to the Chinese economic deceleration. The phone maker’s shares dropped more than 10 percent.

The rout also continued in Asian markets with Japan’s Nikkei losing more than 2.60 percent during Friday trading but stocks in China, including Hong Kong, rebounded.

The American manufacturing sector grew last month at a much slower pace than expected last month, according to the Institute for Supply Management. The ISM manufacturing index fell to 54.1 in December, the lowest in two years.

Gold prices on Friday rocketed to their highest last seen half a year ago at 1,299 Dollars due to volatile stock market figures caused by Chinese below 50 PMI data and a weak US ISM along with Apple losses.

Meanwhile, China and the United States are going to hold high-level trade talks in Beijing for two days starting next Monday, Chinese Commerce Ministry said as governments of both countries look for common ground to end the trade war.

Sentiments rose after the announcement that the US and China are willing to make headway, making the safe-haven Japanese Yen lose about 0.5 percent against the American Dollar on Friday. But the Yen continues to ride on the strong wave it caught with the flash crash the day earlier.

Japan’s vice finance minister Masatsugu Asakawa said the government will “monitor the situation for speculative moves in the foreign exchange market,” after the surge in Yen. “Volatility was high during Sydney trading,” he said pointing at speculators.

A very strong Yen is problematic for Tokyo policymakers because the country’s manufacturers rely on exports, such as to China where Japanese machines are used in production.

Bank of Japan Governor Haruhiko Kuroda, in the meantime, said on Friday continued to take on deflation, another headache for the world’s third-largest economy. He said it is necessary to move ahead with spurring inflation by whatever means it takes, and that the BoJ wanted to work with the government to achieve a desirable inflation target. Kuroda blamed the recent unexpected Yen gains on developments overseas, meaning China and the US.

Amid all the hectic developments, oil continues to hang in balance with crude struggling below 50 USD and Brent managing the situation below 60 USD.

The Canadian government said on Thursday that China has arrested 13 of its citizens since it detained Huawei CFO Meng Wanzhou, now still in house arrest, at the behest of the US.

US Democrats approved a spending bill that can end the now 13-day partial government shutdown in their first day of the new term in the House of Representatives shortly after being sworn in. However, they did not give President Donald Trump the $5 billion he wants to build a border wall.

Trump and Congressional leaders from both Democrats and Republicans are to meet at the White House on Friday with the markets keeping an eye on the US non-farm payrolls and job growth for the past month.