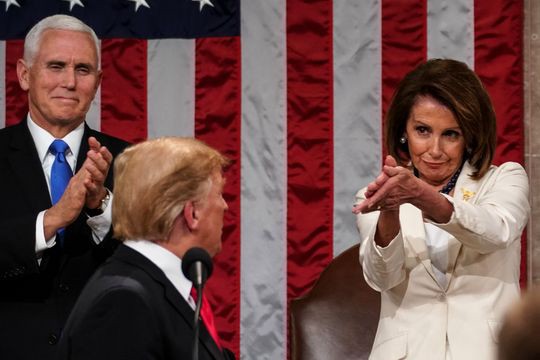 US President Donald Trump affirmed on Thursday that he will declare a national emergency in an effort to fund the construction of the wall he wants along the Mexico border without the Congress’s approval, a move that can potentially cause a constitutional crisis.

This comes after both chambers of the Congress, the House of Representatives and the Senate passed a spending bill that will fund the federal government open through September 30, a step lawmakers took in a bipartisan fashion to avert a second shutdown.

The White House confirmed that Trump will sign the bill into law as urged by fellow Republicans but the declare an emergency. House Speaker Nancy Pelosi vowed to take legal action if Trump proceeds with his plan of invoking emergency powers.

US-China talks are ongoing in Beijing but there have been no comments by the delegations about ‘good’ progress as President Trump claimed the day before.

Treasury Secretary Steven Mnuchin and US Trade Representative Robert Lighthizer are anticipated to meet with Chinese President Xi Jinping on Friday after talks with other officials.

White House economic adviser Larry Kudlow told Fox news that he is “cautiously optimistic” about the negotiations to resolve the trade war.

A Reuters poll of 110 economists found out that there is a one-in-four chance of a recession in the US economy in the next 12 months, a situation that should prevent the Federal Reserve from raising interest rates in the next month FOMC meeting.

The country’s Consumer Price Index (CPI) came lower than expectations in January as the National Bureau of Statistics on Friday revealed it to be 1.7 percent higher than a year ago.

UK Prime Minister Theresa May suffered yet another defeat at the House of Commons after lawmakers rejected her Brexit strategy. MPs voted by 303 to 258 against a motion defending her government’s negotiations with the EU. The vote is not binding, however, it once again weakens May’s hand in dealing with Brussels.

The de facto OPEC leader Saudi Arabia partially shut down Safaniyah oil field, its biggest offshore field with an output capacity of over one million barrels per day (bpd), spurring a new hike in oil prices.