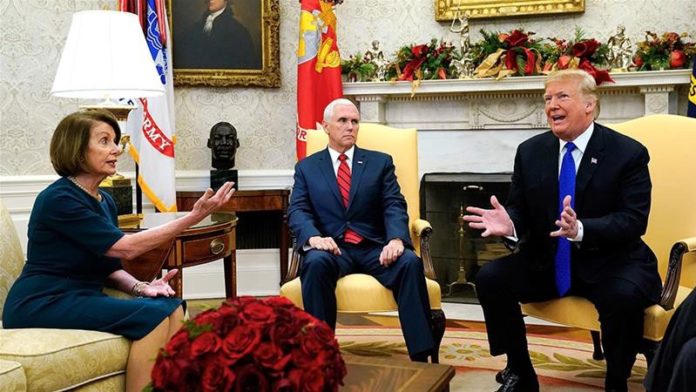 A drastic fall into the bear market in US stocks has now spread to Asia and shows no signs of abating in what market-watchers call the worst Christmas time performance ever in history. The fear is mostly caused by concerns over an anticipated slowdown in global economic growth after a year of record after record highs in markets.

Haruhiko Kuroda, the Governor of Bank of Japan said the instability in stock markets was due to increasing worldwide economic uncertainties but said his country’s economy was resilient to absorb any shock from the outside. Kuroda said it was taking his bank longer to achieve the 2 percent inflation target but stated that the Japanese economy was likely to continue expanding moderately.

US President Donald Trump said on Tuesday that the shutdown of the federal government was going to last as long as the Congress does not meet his demand for 5 Billion Dollars to build a wall along the Mexico wall. The American government was shut down on Saturday over an impasse at the Senate to approve a spending bill.

Meanwhile, he went on lashing out at the Federal Reserve for its interest rate hikes in remarks that further worried markets which this week first feared Trump would fire the Fed Chair Jerome Powell. On Tuesday, Trump expressed his confidence in Treasury Secretary Steven Mnuchin who is trying to calm down financiers and bankers over rising worries amid the President’s unpredictability. Trump once again attacked the Fed, telling reporters at the Oval Office that the central bank was raising interest “rates too quickly.”

As a result of the pressure of negative sentiments, Trump’s ceaseless spar with the Fed and the government shutdown in the US, the greenback has been down in the majority of currency pairs.

In Europe, the turmoil over Brexit goes on in newspaper headlines as there is no scheduled political development due to the Boxing Day holidays across the continent. The Italian Parliament earlier passed the tweaked budget after long negotiations with the EU, putting an end to a crisis with Brussels.

The fall in oil could not be stopped, at least for now. But Russia’s Energy Minister Alexander Novak said that prices would stabilize in the first half of the next year. He said the coordinated efforts by OPEC+ would support prices.