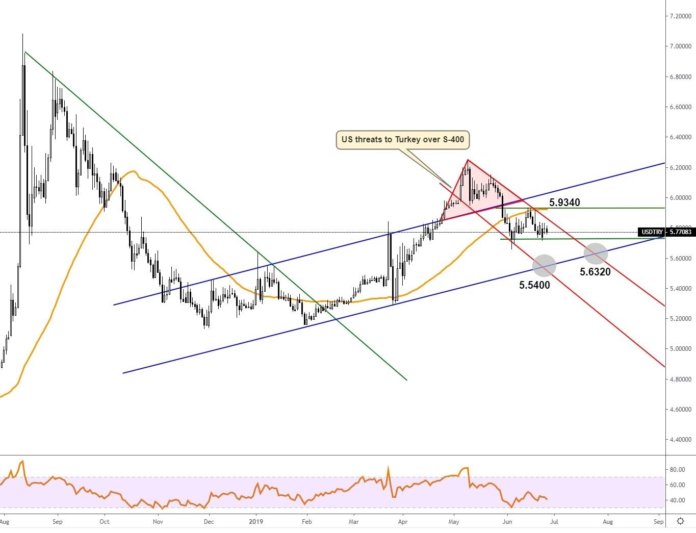 Turkey continues to grapple with fierce US objection to its purchase of S-400 defense system acquisition from Russia. In Turkey, where a neutral monetary policy is in charge, US pressure on Ankara to cancel the buying of Russian missiles is changing the market direction.

Turkish President Tayyip Erdogan has remained defiant of calls by his NATO allies.

“There can be no suggestion of Turkey’s obtaining permission from another country to buy defense systems. The S400 agreement is a done deal and the delivery will begin in July, he said.

The US is preparing steps to kick Turkey out of the F-35 warplanes program should it proceed with the system. Meanwhile, the US representative to NATO, Ambassador Kay Bailey Hutchison said that her country cannot let Turkey enter into an alliance with Russia and threaten the F-35 program.

In global markets, support for Turkish assets is increasing. Finally, the signals by the Fed that an interest rate cut is imminent had a positive impact on the currencies of developing countries. Trade risks and global growth concerns push central banks for an expansionary monetary policy which in turn will reflect positively on emerging economies such as Turkey.

Turkey’s central bank CBRT addressed the global risks during its last monetary policy meeting and stated that they could take the necessary steps in a way that would not disturb the balance of improvement in inflation.

The volatility in USDTRY due to the S-400 crisis has now calmed down due to Turkey’s known and consistent stance and positive environment for Turkish assets. The current global developments in the markets are advancing in favor of the Turkish Lira. The 5,7200 region will follow as the first important support line for any withdrawals that may occur from the current price movement. In case the retreat persists under this region, the 5.6320 and 5.5400 will enter our radar.

Although global developments are shaping in favor of the Turkish lira, Russia’s delivery date of S400 defense system to Turkey is nearing. Ankara will face crushing US sanctions. The sanctions may accelerate the volatility in the exchange rate going upwards. 5.8450 region will maintain its importance in the short term. If the upward movement breaks through this region, 5.9340 and 6.0000 will be watched.