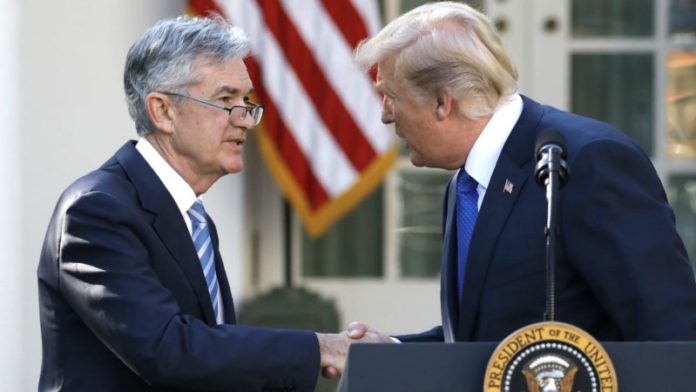 US Federal Reserve Chair Jerome Powell met with President Donald Trump during an “informal” dinner on Monday evening and Treasury Secretary Steven Mnuchin at the White House, the central bank said. It was “to discuss recent economic developments and the outlook for growth, employment, and inflation,” it added.

“Chair Powell said that he and his colleagues on the FOMC will set monetary policy in order to support maximum employment and stable prices and will make those decisions based solely on careful, objective and non-political analysis,” a statement by the Fed read. Trump has been a fierce critic of Powell’s management, especially in relation to interest rates. The duo had steak in their first meeting since Trump nominated Powell in November 2017.

No shift in BoJ evaluation

Governor of the Bank of Japan Haruhiko Kuroda said on Tuesday there has been no shift in the central bank’s evaluation of the economy after polling errors required the labor ministry to review monthly wages data. Kuroda stated that the BoJ had to re-calculate prices of corporate services and the output gap following the correction in wages data but the impact was limited.

The Markit/Nikkei Japan Services Purchasing Managers Index (PMI) increased to the seasonally adjusted 51.6 in last month compared to the 51.0 in December. Japan’s services sector activity was uplifted due to an increase in domestic demand, but worries that the economy will decline due to the US-Sino trade war remain.

The Reserve Bank of Australia (RBA), the country’s central bank, cut its projections for inflation and growth in a hint that a rate hike was considerably off the horizon. RBA also, in line with expectations and adhering to its neutral stance, left the interest rate at a record low 1.50 percent for the 30th straight month.

Amid the Sino-US trade war, the Trump White House said on Monday that negotiating the World Trade Organization’s new rules to try to harness China’s “mercantilist” trade practices would simply be a “futile exercise.” The US trade office in its annual report to Congress promised to proceed with its unilateral approach to protect American businesses, workers, and farmers.

UN warns of further US tariffs

But the UN trade and development agency warned that the US plans to increase tariffs on Chinese goods next month, if the talks fail, could lead to an economic downturn with global implications. Washington put additional tariffs between 10 and 25 percent on Chinese goods worth of $250 billion last year for what Trump has called “unfair trade practices.”

“The implications for the entire international trading system will be significantly negative. There’ll be currency wars and devaluation, stagflation leading to job losses and higher unemployment and more importantly, the possibility of a contagion effect, or what we call a reactionary effect, leading to a cascade of other trade distortionary measures,” Pamela Coke-Hamilton, head of international trade at the UN agency warned.