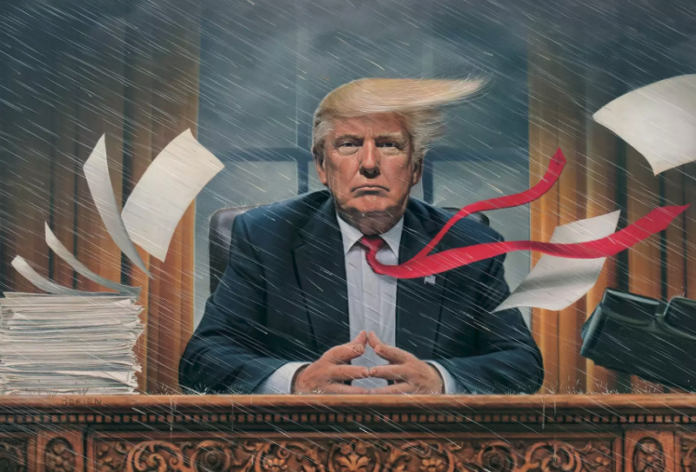 The US Government now faces increasing chances of a shutdown due to President Trump’s insistence to get 5 billion Dollars for a wall he wants along the Mexico border. A spending bill was passed by the House but the Senate is unlikely to grant it approval during a Friday vote, setting up the conditions for Trump’s threat.

Washington is in enormous disarray after Trump ordered the US military out of Syria despite robust opposition from the Pentagon and political establishment including President’s own party Republicans. Secretary of Defense Jim Mattis resigned in protest only hours after Trump also announced the withdrawal of some 10,000 American troops in Afghanistan, yet another sign of a growing isolationist policy that can have global consequences for decades to come.

Stocks came down as the panic spread because of potential government shutdown and reversals in the foreign policy that shocked US observers.

The Dow Jones Industrial Average saw a fall of 464, a figure that took its losses above 1,700 points in 5-days. The Nasdaq Composite, on the other hand, witnessed a drop of 1.6 percent, getting near to a bear market territory. The S&P 500 dropped by 1.5 percent and closed at 2,467.

Global stocks were not immune to the contagious Christmas scare. In Asia, all the majors came in red. Tokyo’s Nikkei was down by 1.5 percent while Australian stocks lost about 1.3 percent, coming near to a new low of the last two years.

The US Justice Department on Thursday accused China of technological & economic espionage and indicted two Chinese nationals who it said were members of the Chinese State Security on charges of hacking to steal technological and military secrets. The Chinese Foreign Ministry on Friday said it resolutely rejects the “slanderous” accusations Washington levels against Beijing. Britain, New Zealand and Australia stood with the US.

Chinese tech and finance stocks lost more 1.6 percent over the developments despite a truce in the trade war between the US and China.

The Bank of England (BoE) left the interest rates unchanged at 0.75 percent in its Thursday Monetary Policy Committee meeting. The decision came unanimously. Governor Mark Carney warned against growing risks to the UK economy with the clock ticking ahead of the end-of-March Brexit. Carney said the British economic outlook was “highly uncertain” and the uncertainty “intensified considerably” over the past several weeks.

With Trump mulling a withdrawal from a Cold War-era nuclear treaty with Moscow, Russia has once again successfully tested a ship-based hypersonic missile, a weapon the USis currently unable to defend against, the CNBC reported, citing intelligence sources. The move is like to increase tensions in Eastern Europe where NATO and Russians keep a balance.