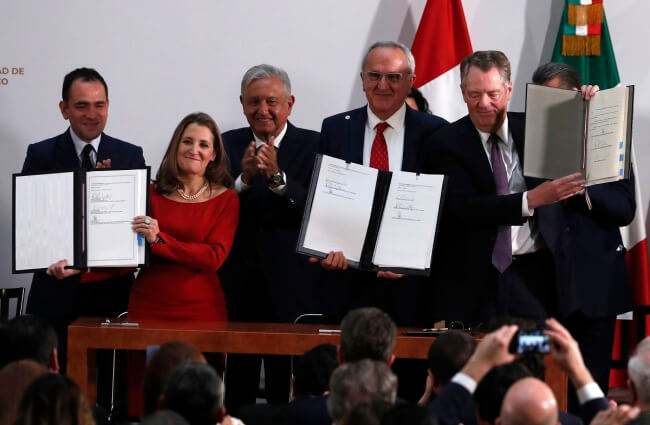 Officials from Canada, Mexico, and the United States signed their new free trade agreement called USMCA at a ceremony in Mexico City on Tuesday.

The signing of the revised US-Mexico-Canada trade deal came about more than a year after the leaders of the countries first put the ink on it and an announcement on Tuesday by the US House of Representatives Speaker Nancy Pelosi that the Democrats finally reached an agreement with the Trump administration.

USMCA will now need to be ratified by the assemblies of the three countries. The US Senate’s Republican Majority Leader Mitch McConnell said he would likely keep the deal waiting for a vote on the deal until President Trump’s trial.

Having been directed by Pelosi, Democrats finally announced two articles of impeachment against President Donald Trump: Abuse of power, obstruction of Congress. Trump thus became the fourth president in US history to be formally impeached.

The Federal Reserve is widely expected to keep its federal funds rate on hold at 1.75 later today when it concludes a two-day policy meeting in Washington.

Markets will focus on the language used by the Fed and signs for the monetary and specifically interest rate policy next year as well as a speech by Chairman Jerome Powell.

The Wall Street Journal reported Tuesday that American and Chinese negotiators were working to postpone the next scheduled round of US tariffs on Chinese goods worth about $160 billion.

They were “laying the groundwork” for the Trump administration to put off an increase of 15% in tariffs, the newspaper reported.

But hours later White House economic advisor Larry Kudlow said that December 15 tariffs were still “on the table.” White House trade adviser Peter Navarro stated that Trump will be the one making the final decision.

With less than 24 hours to go before the general elections in the UK, Prime Minister Boris Johnson said on Wednesday that the race was getting tighter and tighter.

“This could not be more critical, it could not be tighter. I’m just saying to everybody the risk is very real that we could tomorrow be going into another hung parliament, that’s more drift, more dither, more delay, more paralysis for this country,” he told Sky News.

US crude stocks rose by 1.4 million barrels in the week ending on December 6 to 447 million, American Petroleum Institute revealed on Tuesday. The expectations in the market were for a fall of 2.8 million barrels. The EIA report is due later today.