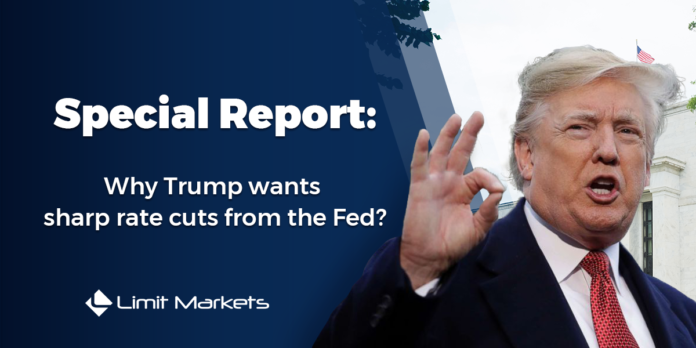 US President Donald Trump continues to aggressively call on the Federal Reserve to lower what he deems too-high interest rates. Trump occasionally takes his criticism to the level of insults and verbal assaults on the Fed and Chairman Jerome Powell.

As the Fed’s September Federal Open Market Committee (FOMC) meeting comes up on top of the world’s finance agenda, we are exploring the reasons behind Trump’s insistent and repeated calls for a big and fast rate cut even down to zero or sub-zero levels. The executive branch’s stance goes so far as to openly threaten the Fed’s legal independence from political interference to which Powell et al have so far sternly resisted.

Before coming to that, we have to look at Fed’s arguments for resisting such calls  – although it did lower the rates by 25 basis points in July and is now expected to go for a similar cut this time around. Jerome Powell and a majority of Fed’s voting members take data that show sustained growth and strength of the American economy into account.

Although the US GDP in the 2nd quarter of 2019 came lower than the expectation at 2.0 percent and the 1st quarter that was 3.1 percent, indicators continue to show strong economic activity. Fed’s decision to go for a cut in July, that somehow ended up creating the opposite effect largely due to Powell’s words, was based on other reasons — mostly fears of a slowdown in the economy and the need to act preemptively.

Trump keeps complaining that the Fed policy and Powell’s monetary stance is impeding his efforts in making the American economy even “greater” and accuses them of contributing to what he calls unfair trade practices stemming from currency exchange rates at a time the US dollar remains unusually strong.

Seeming to worry about American producers’ ability to sell their produce to the world, Trump’s crude criticism of the Fed increased after the European Central Bank decided to dive deeper into the negative interest rates territory by cutting 10 basis points and restarted a stimulus in the form of asset purchases.

The fact that the Chinese yuan also trades above 7 per dollar for weeks now makes Trump’s argument even more compelling.

However, the primary reason behind Trump’s thinking, fuming and tantrums might as well be a political one at its very core: His protracted trade war with China.

Trump sees the China maneuvers in the trade negotiations, which are set to resume in October, as a way of deflecting the deal and postponing it beyond the 2020 presidential elections which might see him lose to one of his Democratic contenders.

The continued tit-for-tat tariffs, despite a tone-down in the rhetoric in September, are a major concern for the Trump administration lest they start negatively affecting the US consumers and producers alike at some point. The inability of American producers to sell their products to their biggest partner China will be hard-hitting. That is particularly true of mid-western farmers who make up the core of Trump’s electoral base.

An electorate hit by Trump’s trade war with China will be an electorate ready to pull away their support from a President whose policies came back to hurt them. As China takes measures to deal with the pain until, they hope, Trump is gone, the President wants the Fed to comply with his wishes and help him swim in the uncertain trade waters until the elections come.