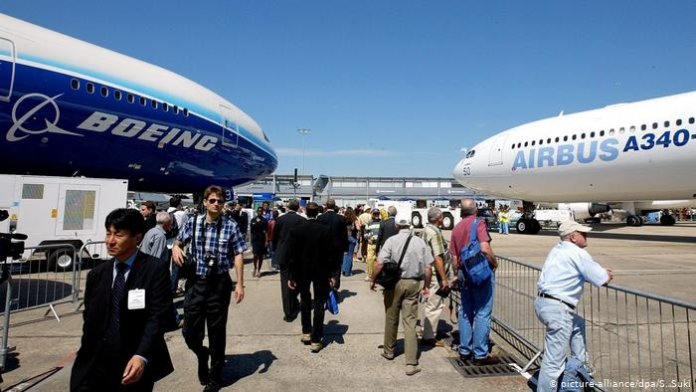 The World Trade Organization (WTO) on Monday rejected the European Union’s (EU) allegations that it was complying with the rules by making minor changes to its launch aid subsidies to aircraft-maker Airbus.

A victory for the US

“The findings reaffirmed that the subsidies continue to cause adverse effects, and found further that European governments even extended the subsidies by renegotiating launch aid with Airbus. Furthermore, the WTO panel found that this massive EU corporate welfare continues to cost American aerospace companies significant lost revenue. The WTO recently valued the harm caused by these subsidies at $7.5 billion,” the United States Trade Representative’s office said in a statement.

The USTR said it was considering increasing tariffs on EU goods and enlarging the current list of imports already subject to tariffs.

Washington also announced that it may proceed with slapping punitive duties of up to 100% on at least $2.4 billion-worth French imports, including champagne, cheese, and other products in response to the Paris government’s new digital services tax which it said would harm US technology companies.

French finance minister Bruno Le Maire said on Tuesday that the latest American threats of imposing more tariffs on French products were “unacceptable” and the EU is ready to respond.

The Reserve Bank of Australia (RBA) on Tuesday left its cash rate at the record low of 0.75% on Tuesday.

“The Board is prepared to ease monetary policy further if needed to support sustainable growth in the economy. The Board also agreed that due to both global and domestic factors, it was reasonable to expect that an extended period of low interest rates will be required in Australia,” RBA Governor Philip Lowe said in a statement.

Japan is putting together a stimulus package program worth $120 billion to support its fragile economy’s growth, Reuters reported on Tuesday citing two government officials “with direct knowledge of the matter.”

The prepared spending would be appropriated in the supplementary budgets for this fiscal year’s remainder, the coming fiscal one that begins from April on.

Oil prices continue to rise over reports that the Organization of the Petroleum Exporting Countries (OPEC) and its allies discuss deepening and extending their current supply cut policy.

At their December 5–6 meeting, the producers plan to cut the supplies by a further 400,000 bpd and extend their deal until June 2020.